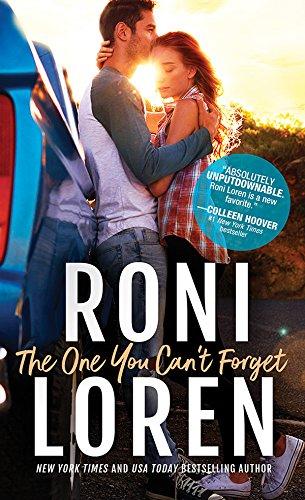 Two great contemporary authors released books in the last couple of months that I simply loved, so I thought I’d do a little cheerleading.

If you haven’t discovered Roni Loren and Nancy Herkness yet, this would be a great time to change that.

In June, Roni Loren released THE ONE YOU CAN’T FORGET, the second title in her excellent contemporary romance series The Ones Who Got Away (also the title of the first book, which also received a starred review - you can read it here).

The series revolves around a set of friends who survived a school shooting and who wind up revisiting the horrid event when they agree to be interviewed for a documentary. THE ONE YOU CAN’T FORGET is Rebecca Lindt’s story.

Most days, successful divorce attorney Rebecca Lindt feels like an imposter. The world knows her as a survivor, but that impression would change if everyone knew her secret.

Chef Wes Garrett is trying to get back on his feet after losing his dream restaurant, his money, and half his damn mind in a vicious divorce. But when he intervenes in a mugging late one night and finds he's saved Rebecca Lindt, the divorce attorney who helped his ex-wife, his simple life gets a lot more complicated.

The pair soon finds themselves helping each other in life's endeavors. But soon, when Rebecca's secret is at risk, they discover they could lose more than they thought, including what they never realized they needed: each other.

THE ONE YOU CAN’T FORGET earned a Kirkus star (full review here) and the reviewer says, “Loren… maintains the complexity and emotional intensity that earned the first book huge acclaim but never loses its way as a sexy, captivating romance.”

Agreed. Wes is involved with an after school program that teaches at risk kids to cook, and Rebecca, who is in charge of the charitable arm of the law firm, becomes involved with the kids, gaining her father’s ire.

A former love makes a lasting impression in a warm and sexy romance from Nancy Herkness.

Kyra Dixon, a blue-collar girl from the boondocks, is dedicated to her job at a community center that matches underprivileged kids with rescue dogs. When she runs into Will Chase - Connecticut blue blood, billionaire CEO, and her old college crush - she's surprised that he asks a favor from her: to be his date for his uptight family's dreaded annual garden party. If his parents don't approve, all the better.

Kyra's not about to say no. It'll give her a chance to be oh-so-close to her unrequited love. What begins as a little fling turns so mad hot, so fast, that Kyra finds herself falling all over again for a fantasy that won't come true. How can it? She doesn't belong in Will's world. She doesn't want to. But Will does want to belong in hers.

All he has to do now is prove it. Will is prepared to give up whatever is necessary to get what his heart most desires.

As in Loren’t book, there are class issues, parental disapproval, and even an after school program—this one pairs at-risk kids with rescued pets. SECOND TIME AROUND is also the second title in a special series (Second Glances, first title SECOND TO NONE) and is a not-to-be-missed read.

The Kirkus review (here) says, “Herkness’ plot may sound very billionaire-meets-Cinderella familiar, but her layered storytelling, elegant writing, and deep sensitivity to a varied cast of characters raises this lovely book beyond genre and trope, aided by the star role the after-school program takes in everyone’s resolutions. Compelling, warmly satisfying romantic fiction from a writer—and a series—you’ll want to revisit.”

So there you go readers! Two terrific contemporary reads that you’ll definitely want to check out.

A very quick note. Since it’s August, it’s Read-A-Romance Month, an event I created five years ago to celebrate the romance genre. I’ve definitely scaled back the event this year, for a variety of reasons—if you’re interested, you can read about that here. The plan is to have one author a day do a Q&A at the site—www.readaromancemonth.com—and Monday-Friday, there will be an author guest hosting the FB page, The Romance of Reading. In fact, tomorrow (Friday, Aug 3) the guest host on the page will be Nancy Herkness. I hope you can join us.