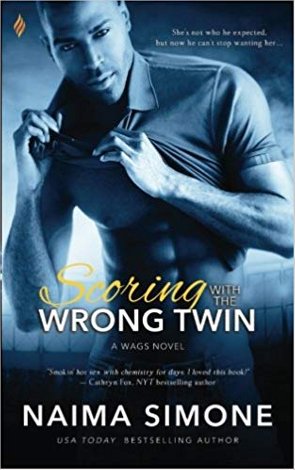 Have you ever noticed that sometimes books show up in your pile that have similar themes or elements? I’m always fascinated when this happens, and last week it came up in the form of twins.

Interestingly, in the form of two very different books that had some very similar elements.

First off is SCORING WITH THE WRONG TWIN by Naima Simone:

Shy, awkward Sophia Cruz has a hard time telling her vivacious identical twin “no.” But when her sister begs her to swap places for a modeling shoot, she caves … again. Then Zephirin Black walks onto the set. The brooding, aloof, and gorgeous tight end for the Washington Warriors. But she can keep it professional… She has to. Because the adorkable Cruz twin has no luck with guys once they compare her to her sister.

After a bad break-up, Zeph hasn’t been big on second chances—and even less with trust. But he finds himself giving please-call-me-by-my-middle-name-Sophia both. The woman he’d dismissed as a spoiled cover model is different from the first time he met her. Quirkier. Funnier. Definitely sexier. What started as one night turns into another…and another…and another…

Still, Sophia can’t go on keeping her secret from him. But telling Zeph the truth will mean losing him for good.

Next is THE ACCIDENTAL BEAUTY QUEEN by Teri Wilson:

Charlotte Gorman loves her job as an elementary school librarian, and is content to experience life through the pages of her books. Which couldn’t be more opposite from her identical twin sister. Ginny, an Instagram-famous beauty pageant contestant, has been chasing a crown since she was old enough to enunciate the words world peace, and she’s not giving up until she gets the title of Miss American Treasure. And Ginny’s refusing to do it alone this time.

She drags Charlotte to the pageant as a good luck charm, but the winning plan quickly goes awry when Ginny has a terrible, face-altering allergic reaction the night before the pageant, and Charlotte suddenly finds herself in a switcheroo the twins haven’t successfully pulled off in decades.

Woefully unprepared for the glittery world of hair extensions, false eyelashes, and push-up bras, Charlotte is mortified at every unstable step in her sky-high stilettos. But as she discovers there’s more to her fellow contestants than just wanting a sparkly crown, Charlotte realizes she has a whole new motivation for winning.

Do you detect a theme?

I loved both of these books. Each of the heroines has to fight her own lack of self-confidence, which is amplified by her sister’s social ease and mastery of the external details by which women are deemed “beautiful.” In meeting Zeph and connecting with him on levels beyond physical beauty, Sophia finds a new kind of confidence in who she is, which not only comes in handy in standing up to a smarmy boss, but also in confronting Zeph when he goes too far in blaming her for their conflicts.

For Charlotte, competing in the pageant and being successful essentially as herself, helps her understand that too often she’s considered herself second best, which has allowed those around her to treat her that way, too.

Simone’s WRONG TWIN is a traditional—and very sexy!—romance, and while Sophia’s work troubles are a big part of the canvas her character is drawn on (and functions as part of the book’s and the couple’s resolution), the main conflict is between Zeph and Sophia.

Wilson’s BEAUTY QUEEN has a big romantic arc in the story, but the one love scene is referred to, not described; and at heart it’s more about Charlotte’s growing realization that, while she’s never sought any tiaras, she’s absolutely worthy of them.

I loved the way each author used the twins paradigm to make the heroine feel less than to start out, but ultimately helped them understand that being exactly who they are is their own personal superpower.

I really enjoyed both of these, and highly recommend them! (And though I didn’t plan it this way, it was really fun to read them so close to each other.)

Any great twin-themed books you’ve enjoyed in your reading travels? Do share.

As a member of the romance community, I feel it’s necessary to comment on the conversation surrounding racism and the RITA nominations this year.

Diversity and inclusion are always important, as is the conversation around them. This is a good reminder to me and other white romance fans to examine our own reading lists and TBR piles and ask ourselves what we’re reading, or what we’re not reading, and if we are taking steps to actively expand our reading choices to include books written by authors of color. (I am keeping this focused on authors of color, though I acknowledge the conversation also applies to LGBTQ+ books and authors, along with books from other underrepresented communities.)

If you’d like to read more, I recommend Ana Coqui’s blog post, What Can I Do? and Kharma Kelley’s Through the Looking Glass: Lack of DEI & The RITAs. Be sure to read RWA’s statement too, here.

Don’t know where to start to expand your reading? These are among my favorite reads from authors of color in the last year or so, and I’ve asked a few of them to add some of theirs:

Alyssa Cole, Beverly Jenkins, *Sonali Dev, Helen Hoang, and Jasmine Guillory received a lot of ink and acclaim recently, for good reason. You can’t go wrong with any of their books. From Cole, I find the Reluctant Royals series especially fun, and while I enjoy everything I read by Jenkins, INDIGO remains my favorite.

Alternatively, if you haven’t read Robinne Lee’s THE IDEA OF YOU, please do! It’s my pick for “My Favorite Book Not Enough People Know About.” (I should say though, it is beautiful and heart-wrenching, but has an ambiguous ending.)

Alisha Rai’s HATE TO WANT YOU

Sandya Menon’s WHEN DIMPLE MET RISHI  &  FROM TWINKLE, WITH LOVE
Falguni Kothari’s THE OBJECT OF YOUR AFFECTIONS  &  MY LAST LOVE STORY

(To be clear, Sonali, Naima and Mia also recommended authors on my list, but since I’d already mentioned them I left them off theirs.)