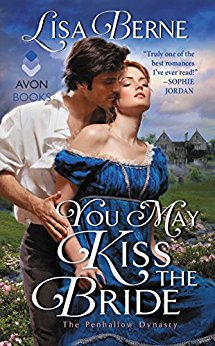 As we close out March, I thought it would be a nice salute to women’s history month to focus on some great historical romance and some truly terrific romance heroines!

First off, I wanted to give a major shout-out to a debut novel that was released this week, Lisa Berne’s You May Kiss the Bride (which earned a starred review). The book is delightful, and I loved it for many reasons, but Livia is a gem of a character and her ability to transcend the mean-spiritedness around her and maintain an authentically optimistic outlook that not only sustains her bright personality but also transforms those around her—in particular the Penhallows—is inspiring. Also, I have read so many books where the vile antagonist never gets a comeuppance, and mean-girl Cecily is almost over-the-top (and still recognizable to many of us who knew them in Middle School and some of us who still get to deal with them today) yet handled in such a pitch perfect way for Livia that this stroke alone would make me a fan.

Speaking of fantastic heroines, I also picked up Celeste Bradley’s Wedded Bliss from The Wicked Worthingtons series (releases May 2), and it’s terrific (and also received a starred review). “After Bliss Worthington’s plans to marry a duke go awry and she winds up wed to his bastard brother instead, the couple enters into a battle of wills that may end up in a happy-ever-after if they can sift through fact and fiction while opening their hearts to the truth.” Truly a fun, sexy read, with misunderstandings and machinations that make us laugh and keep us on the edge of our seats, but again, it’s the heroine who steals the show. Bliss is delightful and one-of-a-kind, and she has a few tricks up her sleeve to put everyone’s life to rights, since it’s what she’s really good at. Plus, she has a Deep Secret that no one was expecting, especially not the husband who accused her of being a penniless nobody trying to dupe his brother.

Just delightful. Both laugh out loud funny and heart-wrenchingly touching in parts, and well worth a read. Plus the Worthingtons are a family you’ll find very hard to forget!

Finally, I’ve heard great things about Lenora Bell, whose debut, How the Duke Was Won, came out last April (to a starred review) and launched the Disgraceful Dukes series. The third and final book, Blame It on the Duke, releases April 18, and so I thought I’d catch the first one. It lives up to the hype and the review, and includes another grand heroine, Charlene Beckett. Charlene is the unacknowledged half-sister and doppelgänger of Lady Dorothea, the daughter of an earl. When Lady Dorothea is invited, along with three other eligible ladies and their chaperones, to a disreputable duke’s estate to, in effect, vie for his hand in marriage, she is traveling and her mother sends Charlene instead. Success in gaining a proposal for Lady Dorothea means financial freedom for Charlene and her family, as well as many of the courtesans who live under her mother’s bordello roof. Of course the Duke of Harland falls for Charlene, mainly for all the things she does that are outrageous and decidedly un-Tonnish. In the end, Charlene and the duke must move past masks and mistrust, and of course they do. But the many ways Charlene would never fit in to aristocratic English Society are the reasons she makes such a strong, unique Regency heroine.

I definitely look forward to catching up with Bell’s next two titles in this series that has garnered rave reviews and adoring fans. A truly great read and an author to watch.

Two other March release mentions that both received starred Kirkus reviews and great buzz, though I haven’t had the chance to read them yet (I’m hoping to get audio copies from their respective audio publishers!) are Cat Sebastian’s second historical M/M romance,The Lawrence Browne Affair which features a con man and a “mad” earl. “In a crumbling castle in Cornwall, two inauthentic men from vastly different registers of Regency society find in each other an authentic and passionate love. Another exquisitely written, deeply romantic novel from Sebastian.”

And Alyssa Cole’s An Extraordinary Union, which features a mixed race couple who are both Civil War era spies. I love this line from the review: “Any reader who thinks romance novels are pure fluff will be schooled by Cole’s richly drawn characters, who must overcome generations of trauma in order to let themselves love each other.”

Great romance reading to round out the month!

I also want to mention that two of my favorite historical women’s fiction titles from last year recently released in paperback - not exactly romance, but high romantic themes in both of them:

The Summer Before the War by Helen Simonson—which received a starred review that included this line: “A bright confection of a book morphs into a story of dignity and backbone. A beautiful, thought provoking read on so many levels.” (And if you missed her debut, the contemporary Major Pettigrew’s Last Stand, be sure to find it too. A not-to-be-missed author, so far.)

And Lilac Girls by Martha Hall Kelly was another 2016 great read. It revolves around true stories from experiments at the Ravensbrück concentration camp. The “Rabbits”—Polish prisoners who were experimented on; the female Nazi doctor who carried many of them out; and Caroline, the former New York socialite who brought their story to light after the war.

I simply love historical romance and women’s fiction and am so grateful there are so many great women authors who bring past eras and breathtaking characters—fictional and real-life—to life on the page.

Who are some of your favorite authors, or what titles have you read lately that you’d recommend?