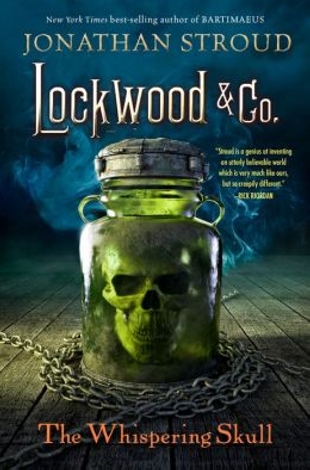 I was a huge fan of The Screaming Staircase, the first book in Jonathan Stroud’s new Lockwood & Co. series, and I’m pleased as punch to report that the sequel, The Whispering Skull, is just as fantastic. It has all of the strengths of the first book: a believable and distinct narrative voice (One of George’s most famous characteristics, aside from sarcasm, wind, and general bloody-mindedness, was his fascination with things unknown.), interesting and thoughtful worldbuilding (Sensitives do psychic work, but they refuse to ever actually fight ghosts, for reasons of pacifist principle. They’re generally as drippy as a summer cold and as irritating as hives.), excellent character development* (George has a Zeppo-ish arc!), and genuine scares tempered with smart humor:

I looked at him. “Is that the one where we run away?”

“Not at all. It’s the one where we beat a dignified emergency retreat.”

And, like the first book did, it offers up a completely engrossing adventure mystery, paints a damning portrait of child labor AND lays the groundwork for the next installment. Fingers crossed that Jonathan Stroud will keep these books coming for a ZILLION YEARS.

If you’re a fan of swordplay, ghost stories and snark, go out RIGHT NOW and pick up the first book. I guarantee that by the time you hit the halfway mark, you’ll want to speed back to your local library to request the second one. For those of you who HAVE read The Screaming Staircase, know that you have all of these things to look forward to: a contest between rival agencies; scattered clues about a Far-Reaching Conspiracy**; the titular Whispering Skull; GHOST RATS; and a mirror that provides a view of the afterlife…but kills the viewer. I’m kicking myself for blowing through it so quickly, because now I have THAT MUCH LONGER to wait for the next book.

While you wait for The Whispering Skull—it comes out in mid-September—in addition to re-reading The Screaming Staircase, here are a few items to keep you entertained:

Late last year, Jonathan Stroud wrote a crowd-sourced Lockwood story for the Guardian. You can listen to him read it here. You can also check out his list of favorite swordsmen here, or you could go WAY back and read his outstanding Bartimeaus books. Now that I think about it, even though they are completely different on the surface, the slavery theme in Bartimaeus and the child labor theme in Lockwood are quite complementary.

*Lockwood himself is still a bit of a mystery, still very Chrestomanci-ish, but due to a HUGE REVEAL at the end of this one, I’m confident that we’ll learn much more about his past in Book Three.

**I have a Big Theory about that, but I don’t want to get too spoiler-y.