Saddle Sleuths: Ex-Pinkerton Ops Ride the Trail of a Conspiracy 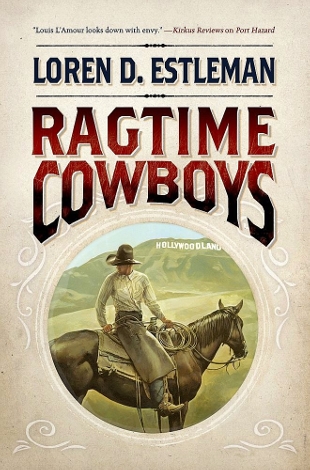 Charles Angelo Siringo, the genuine historical figure employed so entertainingly by Loren D. Estleman in his new detective novel-cum-Western, Ragtime Cowboys, was born in 1855 on Texas’ Gulf Coast. He was only a teenager when he began collecting pay for his cattle-ranch labors, and by the mid-1870s he was helping to steer huge herds of livestock down trails to market in Wichita, Dodge City and other frontier towns. But the late 1880s saw this Italian-Irish drover abandoning the range in order to settle down as a married merchant. He also penned a best-selling autobiography about his cattle-wrangling days—one of the earliest books to popularize the romantic myth of the American cowboy. Soon afterward, he signed on as an operative with the Chicago-based Pinkerton National Detective Agency. Siringo stood barely 5-foot-8, and weighed in at 130 pounds. Yet none other than William Pinkerton, son of that agency’s founder, claimed this “cowboy detective” was “as tough as a pine knot and I never knew a man of his size who can endure as much hardship as he does.”

Although Siringo traveled across the West, getting to know (and sometimes pursuing) men who’d become synonymous with those wide-open spaces in the late 1800s—among them Butch Cassidy, Bat Masterson, Tom Horn and Billy the Kid—he probably never encountered a tubercular onetime Pinkerton op named Samuel Dashiell Hammett; the future author of The Maltese Falcon and The Thin Man didn’t even sign on with the “Pinks” until 1915, eight years after Siringo retired from the company. Yet, in Ragtime Cowboys, Estleman contrives to team them up on a lost-horse chase that rapidly expands into something much more complicated and engagingly treacherous.

It all starts on a buckets-raining day in 1921, when Wyatt Earp—yes, the taciturn gambler/gunman from Tombstone—swings by Siringo’s Los Angeles domicile, a leaky excuse for a home within sight of the old “Hollywoodland” sign. (That landmark was actually erected in 1923 as a real-estate advertisement, and its “land” section was removed in 1949.) It seems Earp has mislaid a prized filly, Spirit Dancer; more precisely, she was stolen “right out from under my stable boy’s nose.” Earp wants Siringo to fetch her back, with help from Hammett, an uncommonly scrupulous ex-Pink in San Francisco who’s just starting out as a fiction writer. In the time since he lost Spirit Dancer, stable boy Abner Butterfield has ambled north hoping to join the crew of a ranch in California’s Sonoma County, and Earp has already paid Hammett to begin probing the “horse-napping.” Siringo would like to pass up this assignment. “I’m sixty-five, Earp,” he avers. “I haven’t sat a horse in years. The last time I fired that Colt was at a biscuit tin. I missed.” However, with his own writing career floundering, Siringo could sure use the money Earp’s offering. So he hops a Bay Area–bound train to begin the search.

Hammett’s initial encounter with his fellow yarn-spinner provides a glimpse of the lighthearted dialogue Estleman peppers throughout this novel:

“Mr. Siringo, you’re a foot shy of your reputation.”

“I’m short, but I don’t cost much to feed.” Siringo took the hand offered. The grip was firm and dry. “You’re older than I thought.”

“Don’t let the white hair fool you. I’m twenty-six, going on a hundred.”

Siringo’s an inveterate capitalist, with an antipathy toward anarchism that he sprouted in the wake of Chicago’s 1886 Haymarket massacre. Hammett leans toward Marxist ideology and, in the midst of America’s Prohibition era, a steadfast faith in the redemptive potential of bootleg spirits. (“The thing I don’t get about drys is how can a man wake up knowing that’s as good as he’s going to feel all day long.”) They make an amusing, engaging pair, their boisterous adventure in these pages bringing to mind Blake Edwards’ 1988 movie, Sunset, which found early Western film star Tom Mix (portrayed by Bruce Willis) working with Wyatt Earp (James Garner) to solve a murder mystery in 1929 Hollywood. Siringo and Hammett also prove to be quite capable, and often incredibly lucky, gumshoes.

Right off the bat, they pick up a “tail,” an errand-runner for San Francisco “boss politician” Sean Patrick “Paddy” Clanahan, who—after some rather shocking coercion—confesses that he’s following them on orders from Clanahan henchman Edward Edison Lanyard, a notorious character better known by the soubriquet his initials spell, the “eel.” Our two heroes then ride east to Sonoma to quiz Butterfield. It turns out the spread he’s looking to work for is Beauty Ranch, once owned—and operated with limited success—by novelist Jack London (who also perished there in 1916). Siringo and Hammett are welcomed to the ranch by London’s widow, Charmian, and the younger of his two daughters, Becky, who led them to the slippery Butterfield. But before the sleuths can find out who paid Earp’s erstwhile stable hand to look the other way while his filly was filched, gunfire rips through a nearby window and Butterfield—apparently the target of this gunplay—hurls himself through the shattered pane. It takes some skillful horsemanship on Siringo’s part to foil his escape, but the shooter himself gets clean away. Butterfield subsequently insists he’d taken Spirit Dancer solely for his own profit, and secreted him at a livery stable back in San Francisco. That doesn’t answer the question, though, of who would have benefited from killing Butterfield before he talked.

It doesn’t take long for that puzzle to collide with myriad others. Why, for instance, is Clanahan so intent on acquiring Beauty Ranch and its vineyards? What do these shenanigans have to do with a mounting scandal involving the administration of the new U.S. president, Republican Warren G. Harding, and Naval petroleum reserves at Wyoming’s Teapot Dome? And why has a prosperous bootlegger from Boston, Joseph P. Kennedy, landed in San Francisco, to stuff money into useful pockets while he talks up his elder son as the first Catholic president of the United States?

Ragtime Cowboys joins the already rich, if too often overlooked field of Western detective fiction, which in the past has brought us such sure bets as Alistair MacLean’s Breakheart Pass (1974), Douglas C. Jones’ The Search for Temperance Moon (1994), Bill Pronzini’s Quincannon (1985) and The Hangmen of Sleepy Valley, a 1940 lynching tale by Davis Dresser (better known as “Brett Halliday,” author of the Mike Shayne private-eye novels). Although Loren D. Estleman is best associated with his continuing series about Detroit P.I. Amos Walker (Don’t Look for Me; Burning Midnight), he’s made his own contributions to this subgenre with more than half a dozen novels about a make-his-own-rules Old West lawman named Page Murdock (Port Hazard, 2004).

You can recognize the hand of a confident storyteller throughout Ragtime Cowboys. Estleman delivers briskly choreographed action sequences, and many of his characters—including Charmian and Becky London (the latter of whom the author evidently knew as an old woman, before her death in California in 1992)—are real enough that you want to invite them out to lunch. He’s done a bang-up job, too, of reanimating shamuses-for-hire Charlie Siringo and Dashiell Hammett, with their tag-team crime solving and snappy repartee. (At one point, Siringo orders a steak so bloody rare that he insists, “I could save this cow with a tourniquet.”) Yet he’s not beyond making careless mistakes. At the very end of Chapter 11, Siringo races off bareback on a horse in pursuit of a suspect … only to begin the next chapter by looping either his lasso or his reins around the horn of his previously nonexistent saddle. And Estleman often tries to present contextual information or historical background through dialogue, rather than narrative text, resulting in awkward, abrupt utterances on the order of “Tell me more about this Teapot Dome business.”

Short, comprising about 270 pages, Ragtime Cowboys feels like a creative palate cleaner for Estleman, rather than a work in which he invested blood, sweat and years, like his 2013 stand-alone The Confessions of Al Capone. Still, it’s a spirited romp, a what-if yarn that brings a former Old West celebrity—Charlie Siringo—some deserved modern notice and proves that detective fiction works even when the mean streets are really dusty trails.