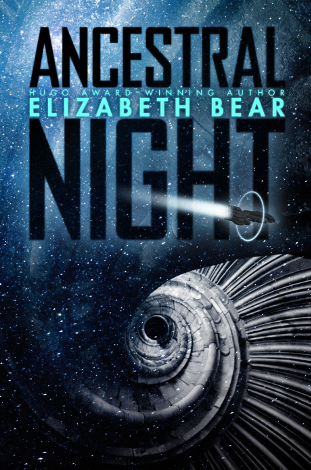 In Space, no one can hear you scream. Unless you are screaming internally and you are connected to an AI that can hear you and also have been recently infected with a maybe-who-knows parasitic alien that allows you to communicate with the universe itself. I am only half joking here, I always use humour to deflect my emotions as a type of calibration. Emotional calibration and identity are at the core of Ancestral Night, the excellent new novel by Elizabeth Bear, a space opera that is also about aliens, ancient civilisations, politics, gaslighting, choices and found families.

But I am ahead of myself.

Ancestral Night is a conversational hard science fiction novel, set a long time away in the future, about an engineer called Haimey Dz. Haimey flies with her BFFS, pilot Connla and AI Singer (the shipmind) doing the odd jobs as space salvagers. During a routine mission Haimey not only uncovers evidence of a crime against a sentient species but also the relics of an ancient civilisation and their unique, life-changing technology. She also gets infected with something alien under her skin that allows her to feel the universe and to map it which comes in handy when they have to flee to save their lives from corrupt authorities, pirates and revolutionaries acting against the Synarche, the central government.

And that’s not all. Because Haimey, our narrator, finds out more secrets than she bargained for. There is also another big, huge, problem: a hot and charismatic lady-pirate called Zanya Farweather who is 100% bad for Haimey (10000%. ONE BILLION PERCENT BAD NEWS) ends up telling Haimey that everything she think she knows about herself, about her past, about her childhood, about the traumatic event in her late teens that defines who she is? All Lies.

And here is where the book truly shines. Yes, here we have black holes, and space shenanigans and action galore as well as philosophical and political discussions about the individual versus the collective enough to sustain ten different novels. But it’s Haimey’s elaborate, complex, continuous self-exploration and self-examination of her memories and above all, her emotions, and the way she deals with them and how define her (or not) that are the novel’s heart. There is a reliable unreliability to Haimey’s narrative that I absolutely adored and welcomed.

In many ways this book is an excellent pairing with MCU’s recently released Captain Marvel. No, really, hear me out. Both are stories centring women being told what or not to do, told that their emotions are crap and that they should know better, that their choices of how to deal with their emotions are wrong. It is about empowerment, going against what anybody else thinks and finding your own way by embracing your identity, flaws and all. Also fighting against baddies and finding a home where your heart is.

Watch the movie, read this book, is what I am saying.