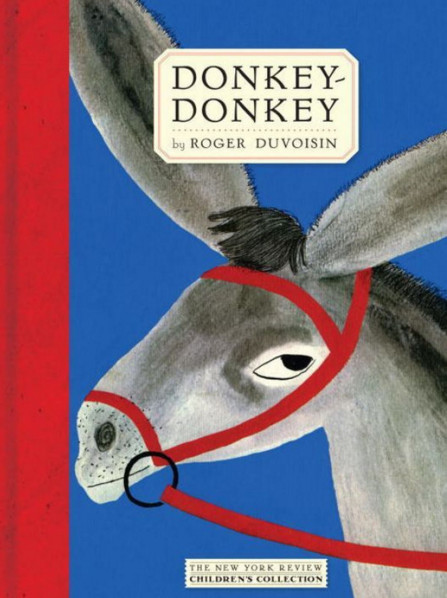 When and why publishing houses decide to reprint older children’s books can be a mystery to readers, but I’m here today to talk about the reissues of some—either on shelves now or about to be quite soon—that make me happy. We’re talkin’ reprints from Roger Duvoisin, Ruth Krauss, Crockett Johnson, and Jeanne and William Steig.  This will make the day of many a children’s literature fan.

Let’s start with Donkey-Donkey from Caldecott Medalist Roger Duvoisin. (He won the big medal in 1948 for White Snow, Bright Snow and won an Honor in 1966 for Alvin Tresselt’s Hide and Seek Fog.) This story was originally published in 1940 and will be on shelves again in early March. It tells the tale of Donkey-donkey, “a nice little donkey,” who looks as all donkeys should—but isn’t happy with his long ears. He considers them ridiculous and sets out, crying, to get advice from various animals about how best to wear his ears. He tries too hard to alter his appearance; things actually end in (a bit of) blood and bandages.

ey are. And, sure, there are tons of picture books out in the world today about Accepting Your Differences—“With sad-eyed good humor, Donkey-Donkey exemplifies the futility of trying to be what one is not,” writes Barbara Bader in American Picturebooks: From Noah’s Ark to the Beast Within—but you still want to find a copy of this one. It’s funny. And it’s Duvoisin, who engages in “craftiness in line and tone,” as Bader puts it so well. She also notes his sly writing. In fact, Duvoisin speaks directly to the reader with lines like “So Donkey-donkey went away again, happy although somewhat doubtful, as you can see by his expression.” He wraps it all up with the matter-of-fact “…and this story is finished.” It’s a delight.

Ruth Krauss’s The Happy Egg, illustrated by Crockett Johnson, was originally published in 1967, but a reissue hit shelves in January. It’s a book perfectly attuned to young children. There’s “a little little bird. It was just born. It was still an egg.” An adult bird sits on the egg—for many pages, as a flower right next to the d

uo grows over time. After the egg cracks, the fledgling bird walks, sings, and flies. In fact, he flies away, but as the final page notes: “It could someday sit on other happy eggs.” And readers see a new flower and five blue eggs, as the story comes full-circle. The book is presented in a small trim size—good for tiny hands—and the palette is dominated by mustard yellows, white, and blue. It’s deceptively simple and sweet, but not saccharine. Find the nearest toddler and share it, especially when Spring comes. (I think anyone who says “there’s no story here” hasn’t shared it with a toddler yet.)

Finally, we have Atheneum to thank for the February reissues of three books from Jeanne and William Steig: Consider the Lemming, originally released in 1988; Alpha Beta Chowder, released in 1992; and A Handful of Beans, released in 1998. My hope is that, with these reissues, children today will be exposed to the Steigs’ work—and perhaps even explore their work further, especially the many books

A Handful of Beans is a collection of fairy tales with Jeanne’s spunky humor and occasional rhymes. Alpha Beta Chowder is a collection of poems that go through A to Z; each poem includes words that begin with the letter in question. (Incidentally, you’ll see a spread that would probably not get published today: Two cowboys holding guns, one having just been shot.) And Consider the Lemming, what I think is the funniest of the lot, is a collection of poems about animals, though one “mythic beast” in included (the manticore)—and it closes with humans. Only this one includes black and white drawings from William; the other books are in color.

One of the best things about these stories from Jeanne is her vocabulary. Never one for talking down to child readers, she’s got such words as transmogrification, rhetorical, misanthropic, abhorrence, prehensile, and incandescent in Consider the Lemming. They’re big, crunchy words for little ears and seeking eye

s. (William is known for this as well in the picture books he both wrote and illustrated.) William’s illustrations are laid out in all their brilliant glory (he’s a favorite of mine): his lively illustrations, with his loose, expressive lines, are funny and sometimes delightfully grim. In the short poem “Big Snakes” (“It doesn’t pay to get too fonda / Your python or your anaconda”), a giant snake is twisted around the body of a seated man, who is just inches away from his cigarette and drink.

Not all reissues are created equal, but I think these are cause for celebration, as they’ll introduce a new generation of readers to some of children’s literature’s finest authors and illustrators.