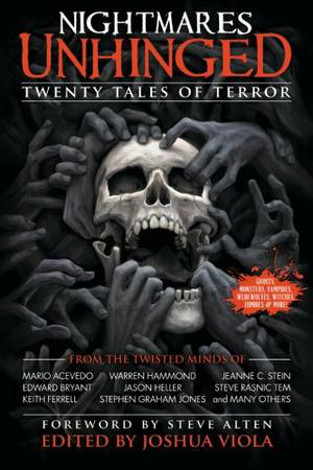 The enduring popularity of the horror genre shows that people still love to be scared. Stephen King, one of the most successful authors of all time, still regularly haunts the bestseller lists. AMC’s The Walking Dead remains a huge hit even into its sixth season, and horror movies, such as those in the Paranormal Activity series, still rake in millions. Kirkus Indie reviewed a few notable horror tomes in the past year that also deliver thrills and chills.

The short story anthology Nightmares Unhinged, edited by Joshua Viola, draws on a wide range of genres, including traditional horror, post-apocalyptic fiction, and alien sci-fi. Authors who include Steve Rasnic Tem, Mario Acevedo, and Stephen Graham Jones tell “gloriously disturbing, well-told tales to unnerve readers.” One standout, said Kirkus’ reviewer in a starred review, is Jason Heller’s “The Projectionist,” which “features a beast that’ll make readers quiver or queasy or a little of both.”

In Tooth & Talon, debut author James Lee offers a clutch of horror and suspense stories with recurring themes and characters that Kirkus’ reviewer said were “refreshingly subtle while often hinting at the supernatural.” Even the titles of these “eerie, entertaining tales,” such as “Closet Monster,” “Devil Beneath,” and “Snowball’s Chance,” hint at the creepiness between this recommended collection’s covers.

Carlos Allende’s novel Love, or the Witches of Windward Circle gives its gory, “Cinderella”-like tale of witchy women in California a humorous spin. Allende, said Kirkus’ reviewer, “juxtaposes the grotesque and the absurd,” as in a scene of “a motherberating her youngest for ruining her prized curtains as she’s literally being dragged into hell.” It’s a novel, the reviewer said, for readers with “funny bones, strong stomachs, and open minds.” David Rapp is an Indie editor.