The Science-Fiction and Fantasy Adaptations from Yesteryear (Part 1) 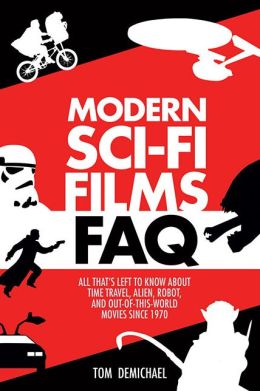 One of the perks of running a science-fiction blog means I see a steady and voluminous stream of books. I sadly don't have time to read everything that piques my interest, but I often have time to give books a good thumb-through. That's how I stumbled across Modern Sci-Fi Films FAQ by Tom DeMichael, a book that gives an in-depth look at the science fiction films that have been thrilling audiences since 1970.

Being that this is a column focused on books, of particular interest to me was one of the early sections that talks about the authors that have seen their work adapted to film. Regular readers to this space know I keep an eye out for forthcoming adaptations, some of which—let's face it—will never see the dim light of a darkened movie theater. But, as Modern Sci-Fi Films FAQ shows, the literary field has a long history of providing source material for major studio-backed science-fiction films, even beyond the relatively recent blockbusters like Lord of The Rings, The Hobbit, and the Harry Potter, Hunger Games, and Twilight franchises.

For the ever-hungry readers who like to compare and contrast words and images that tell the same story, here's a rundown of just some of the science-fiction and fantasy books of yesteryear that have been adapted to film, some covered in DeMichael's interesting book, some not. Many of the following novels are easy to obtain because they see reprints, otherwise you may have to get from libraries and used bookstores.

It seems appropriate to begin such a survey with a story that is often considered to be the first science-fiction story because it depicts the dangers of mankind using science to play God. Mary Shelley's Frankenstein was published in 1818 and has been adapted numerous times. Notable ones include Universal Studio's 1931 production of Frankenstein and 1935's Bride of Frankenstein (both starring Boris Karloff as the monster) and Kenneth Branagh's 1994 production of Mary Shelley's Frankenstein (starring Robert DeNiro as the monster). I would be lying if I didn't admit a fond, nostalgic memory of 1948's Abbott and Costello Meet Frankenstein because, y'know…Abbott and Costello.

Science-fiction pioneer Jules Verne was fond of adventure stories, and Hollywood loves adventure stories, so it's no wonder that several Verne works have been adapted. His 1864 novel Journey to the Center of the Earth, about a wondrous and danger-filled trip underground, was notably adapted as a 1959 film of the same name starring James Mason and Pat Boone. Walden Media produced a fam

ily-friendly 3D version in 2008 starring Brendan Fraser, Anita Briem, and Josh Hutcherson. Verne's Twenty Thousand Leagues Under the Sea (1870), the story of Captain Nemo's underwater trip around the world on his submarine Nautilus, was perhaps most famously adapted as the 1954 Walt Disney film 20,000 Leagues Under the Sea, directed by Richard Fleischer and starring Kirk Douglas and (again) James Mason. There was also a 1997 made-for-television adaptation starring Michael Caine as Captain Nemo. Back in 1873 when Verne wrote Around the World in Eighty Days—another trip around the world, this time through the air and embarked upon by Phileas Fogg—I don't think he envisioned the 1963 Three Stooges vehicle Go Around the World in a Daze or the 2004 Jackie Chan version; it was probably more like the 1956 film starring David Niven. Meanwhile, Verne's 1874 novel The Mysterious Island, a crossover sequel Twenty Thousand Leagues Under the Sea and In Search of the Castaways, was adapted as a 1916 silent film, a 1961 film (featuring Herbert Lom as Nemo and special effects by Ray Harryhausen), and as Journey to the Mysterious Island, a 2012 Disney film done as a sequel their Journey to the Center of the Earth with Dwayne "The Rock" Johnson taking over the lead role.

Vernes' fellow science-fiction pioneer H.G. Wells wrote some of the most enduring and influential novels, many of which have seen multiple adaptations, too. His 1895 time-travel novel The Time Machine, which was effectively a disguised examination of then-present-day social classes, was famously adapted as the 1960 George Pal film starring Rod Taylor, Alan Young and Yvette Mimieux, but also as a 2002 film starring Guy Pearce and Jeremy Irons. The 1896 novel The Island of Doctor Moreau (which echoed Shelley's themes of man playing God) spawned 1932's Island of Lost Souls (starring Charles Laughton and Bela Lugosi), 1977's The Island of Doctor Moreau (starring Burt Lancaster, Michael York, and Barbara Carrera), and 1996's The Island of Dr. Moreau (a terrible film starring Marlon Brando and Val Kilmer). The 1897 novel The Invisible Man was notably adapted thrice: as the 1933 film The Invisible Man starring by Claude Rains; as Memoirs of an Invisible Man, a 1992 modernized comedy version starring Chevy Chase; and as the 2000 film Hollow Man starring Kevin Bacon. (The main character from The Invisible Man also made a cameo at the conclusion of Abbott and Costello Meet Frankenstein, because, y'know…Abbott and Costello.) Wells' 1899 novel The War of the Worlds, which depicted a Martian invasion across the British countryside, spawned the infamous 1938 radio broadcast narrated and directed by Orson Welles that was so believable some thought it to be real. There was also a 1953 theatrical film produced by George Pal and starring Gene Barry, and a 2005 Steven Spielberg adaptation starring Tom Cr

uise. Wells' 1901 novel The First Men in the Moon, a scientific romance that posits that the moon is inhabited by a race of sophisticated insectlike creatures, was adapted to film in 1919 and 1964, and for BBC television in 2010 starring Rory Kinnear and Mark Gatiss. 1904 saw the publication of Well's The Food of the Gods and How It Came to Earth, a novel that featured supersized animals. It was adapted into the schlocky 1976 film Food of the Gods. (Related historical footnote: the similarly themed and similarly terrible 1997 film Empire of the Ants, which boasts Joan Collins battling giant ants, was loosely based on Well's short story "Empire of the Ants". That film could have used a little Abbot and Costello. Just sayin'.)

Aldous Huxley's Brave New World (1931) is a seminal work of dystopian science fiction which depicts a future society where expression of emotions is scrupulously controlled from the powers-that-be and individualism is forbidden. Huxley's classic work saw two adaptations: one in 1980 directed by Burt Brinckerhoff and one in 1998 directed by Leslie Libman and Larry Williams.

Ray Bradbury has had some work adapted to other media. His book The Martian Chronicles (1950) depicts the colonization of Mars by humans fleeing a troubled planet Earth. The book received a television miniseries adaptation treatment in 1979 starring Rock Hudson, Darren McGavin, Bernadette Peters, Bernie Casey, and Roddy McDowall (and written by Richard Matheson—more on him in Part 2). Bradbury's 1953 classic Fahrenheit 451, about a future in which a fireman's job is burn books, was adapted to film by François Truffaut in 1966, and starred Oskar Werner and Julie Christie. (Bradbury's 1962 horror novel Something Wicked This Way Comes was adapted into a 1983 horror film starring Jason Robards and Jonathan Pryce.)

SF Grandmaster Robert A. Heinlein had a brief flirtation with Hollywood in 1950 when he wrote the screenplay for the film Destination Moon. But it wasn't until after his death that his novels saw big screen adaptations. Paul Verhoeven's 1997 film S

tarship Troopers is based on Heinlein's 1959 book Starship Troopers, which was set against the backdrop of an interstellar war between mankind and vicious, buglike aliens and told the story of a futuristic soldier's progression through the military ranks.  Although a fun movie, it diverged somewhat from the book's meatier themes of suffrage and capital punishment. Heinlein's 1951 book The Puppet Masters, which told the story of American secret agents battling parasitic invaders from outer space, was made into the 1994 film of the same name starring Donald Sutherland.

John Wyndham's early science fiction work is often labeled as "cozy catastrophe," a term coined by Brian W. Aldiss in The Billion Year Spree meant to denote a period of post-disaster British science fiction that embraced a comforting ambience. That's certainly descriptive of Wyndham's The Day of the Triffids, a 1951 post-apocalyptic novel in which the rise of an aggressive species of plant occurs after the majority of mankind suffers a plague of blindness. The book was spun into a B-movie horror vehicle in a 1962 film starring Howard Keel, Nicole Maurey, and laughable special effects. The 2009 BBC television version was a bit closer the source material. Wyndham's 1957 novel The Midwich Cuckoos is about alien invaders who impregnate the women of a small town, and the resulting spooky offspring who possess mind-controlling Psi Powers. This creepy book was adapted twice: Village of the Damned (1960, starring George Sanders, Barbara Shelley, and Martin Stephens) and Village of the Damned (1995, directed by John Carpenter and starring Christopher Reeve and Kirstie Alley).

Tune in next week for our continuing look at the science-fiction and fantasy adaptations of yesteryear!