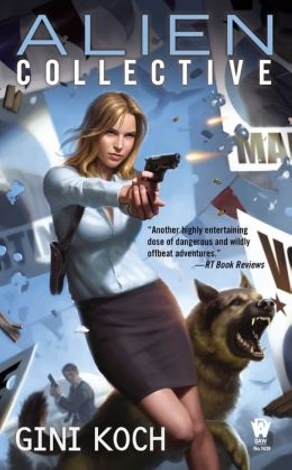 Science fiction and fantasy are genres that almost pride themselves on labeling stories—not just with science-fiction and fantasy labels, but also with any number of subcategorizations within science fiction and fantasy. To sf/f fans, the "science fiction" and "fantasy" labels are simply too broad. To properly categorize a novel is to tag it with subgenre and theme labels like "steampunk," "time travel," "epic fantasy," or "vampires." Does that seem a tad obsessive? Perhaps...but the tags we put on sci-fi books ultimately help readers find the exact book they are looking for.

To that end, I present the merry-go-round of new and recent science-fiction and fantasy releases!

WHAT IT IS: Alien stories feature nonhuman life forms that typically use the idea of "The Other" to shine a light back on ourselves.

RECENT EXAMPLE: Alien Collective by Gini Koch has less to do with making a statement about humanity than it does about reminding us of one of the reasons we read: because it's fun. It's the latest book in a series about a tough and talented woman named Katherine “Kitty” Katt who is part of a supersecret organization on Earth that was started by alien refugees. Their mission is to defend Earth from all sorts of threats, many of them supernatural. In Alien Collective, Kitty applies her fighting skills in the halls of politics as she deals with the return of a former dangerous nemesis.

WHAT IT IS: First contact stories deal with the first meetings between humans and aliens.

RECENT EXAMPLE: In Earth Star by Janet Edwards, an Earthbound 18-year-old girl named Jarra has a lower social status because, unlike the rest of humanity, her immune system makes it difficult for her to survive on other planets. In accordance with her "ape" status, Jarra finds herself left behind on Earth feeling abandoned along with the other handicapped humans. But Jarra gets a chance to prove her worth when Earth comes under threat by what could be humanity’s first ever alien contact.

WHAT IT IS: Genetic engineering is all about using the science to directly modify an organism's genome using biotechnology.

RECENT EXAMPLE: The world of Sharon Lynn Fisher's The Ophelia Prophecy includes humans that were genetically engineered to splice human genes with insect genes to become the planet's bets fighters. This new race, the Manti, become mankind's enemy, eventually ruling the planet. Now, the last humans huddle together in a place called Sanctuary. This book looks at what happens after a woman finds herself with no memory and stranded with a Manti outside of Sanctuary, and the forbidden attraction between them.

WHAT IT IS: The term paranormal is used to describe things that

happen outside the realm of science-based explanations.

RECENT EXAMPLE: Covenant by Sabrina Benulis is about Angela Mathers, a woman in a world where angels and demons exist, who discovered that she was Archon, a being of supreme power who will determine the fate of the universe. Angela has her hands full when a scheming demon abducts Angela's friend, forcing Angela to enter the gateway into hell itself.

WHAT IT IS: A portal is a doorway into another place, be it a parallel world, another dimension, fantasy worlds, or time.

RECENT EXAMPLE: Portals are wondrous things, but they can also be dangerous. The title of Tim Lebbon's Coldbrook refers to a secret laboratory located in a remote area of the Appalachian Mountains. The scientists that work there have opened a doorway into another world, hoping to uncover the mysteries of the universe. Instead, they unleash a deadly disease that could very well spell the end of mankind.

WHAT IT IS: A robot is a complex machine that oftentimes resembles a human being.

RECENT EXAMPLES: If you want to maximize merry-go-round dollar, check out XOM-B by Jeremy Robinson, a mashup of robots and zombies. The premise is that robot servants, having unsuccessfully gained their civil freedom from their human owners, successfully revolted against them, wiping most of them out. But humans may get another chance to change the balance of power when they begin rising from the dead.

Speaking of robots out to kill us...also highly recommended is Robot Uprisings by Daniel H. Wilson and John Joseph Adams, a collection of short fiction that offers several unique and enjoyable perspectives notion that robots are out to get us.

WHAT IT IS: A space opera is a science-fiction story where the major emphasis is on melodramatic adventure. It usually takes place in outer space and on a very large-scale canvas.

RECENT EXAMPLE: Cibola Burn by James S.A. Corey is the latest in a thrilling space opera series that consistently pleases readers. Here, mankind is faced with new challenges as technology has paved the way for further colonization of faraway worlds.

WHAT IT IS: Telepathy refers to the ability to read minds.

RECENT EXAMPLE: What better use for mind-reading than in murder investigations? That's the idea behind the Mindspace Investigation novels of Alex Hughes, a noir-ish set of stories featuring Adam Ward. Adam, formerly of the Telepath’s Guild, is now an ex-drug user and freelancing detective solving cases on the mean streets of Atlanta, Georgia. In Marked, Adam investigates the death of his ex-girlfriend's uncle, even though it means going back to his old stomping grounds at the Guild, where he’s anything but welcome.

WHAT IT IS: Vampires are supernatural creatures that feed off the blood of humans and can shape-shift into bats.

RECENT EXAMPLE: A Dance in Blood Velvet by Freda Warrington is about a woman named Charlotte who has forsaken her humanity to become a vampire herself...all for the love of her vampire suitor, Karl. But that so-called eternal love is put to the test when Karl's former lover re-enters the picture. Worse: her return could mean the unleashing of a brand new terror on the world.