See The World Through Scarlet-Tinted Glasses 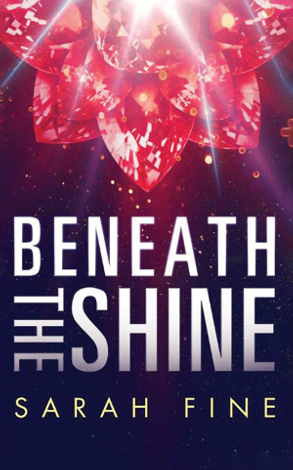 BOOK REPORT for Beneath the Shine by Sarah Fine

Cover Story: Beneath … the Shine

This cover is a little on the nose. It’s pretty, and the gemstone flower certainly fits with the plot, but the literalness of it makes me laugh in an “I’m not sure I should be laughing?” kind of way.

Marguerite Singer was a normal girl with a normal life. Until her father took his own life after his job as a teacher—his greatest passion in life—was replaced by a computer program. Full of grief, Marguerite poured her pain and frustration with the way technology ruins people’s lives into video streamed over the Internet. The video went viral and caught the attention of presidential candidate Wynn Sallese.

Fast-forward to Sallese winning the election, thanks in no small part to Marguerite’s subsequent passionate support videos, and Marguerite and her mom’s relocation to Washington, D.C. There, Marguerite must learn to both navigate the waters of U.S. politics and those of the students at her new private high school, students whose parents will be negatively affected by the new political regime.

At school, she meets Percy Blake, the orphaned ward of the French Ambassador. Percy’s flamboyant, outspoken, and seemingly unconcerned with the state of affairs or the status quo. But although he might seem like he’s above it all, sometimes people put on acts to hide their true selves.

I appreciate Marguerite’s stalwart dedication to Sallese’s campaign and his promises of forcing technology companies to use their products for the good of all citizens, rather than just the rich. There’s something about her passion, however, that had me worried from the very start; being so over the top on board with something tends to make one blind to its faults. I think Marguerite’s just young, and looking for an outlet, which I totally get. But it might take some growing up on her part to really make her BFF material.

Percy’s larger than life. He’s famous on the Mainstream (future Internet) for his fashion videos, he’s sought after by designers and makeup companies who want him to promote their wares/goods, and he has an aloof air that deludes most people into thinking he’s nothing but a pretty face. Through his POV, however—Beneath the Shine features chapters from both characters’ perspectives—you get to know the real Percy. No spoilers, but he’s a fascinating guy. I actually wish the book would have been more about him, rather than Marguerite.

There are hints at interest between Marguerite and Percy from the moment they meet, but neither really trusts each other, nor are they on the “same side” of the political situation. But first impressions have been proven wrong more times than I can count.

Beneath the Shine is set in a not-too distant future in which technology companies, and their senior management, have become part of the political process. Technocrats (“scientists or technical experts who have a lot of power in politics or industry”) were huge influences on the former president, and he gave them nearly free reign to do with their companies what they liked. This meant the rich got richer, and the poor—who couldn’t afford the latest and greatest tech the companies offered—were left behind. Marguerite’s call for “technology for all” resonated with the 99%, and President Sallese promised sweeping reforms while on the campaign trail. The tech is advanced: people wear devices inserted into their heads that allow them to be online whenever/wherever; others wear devices that control their mood and energy levels through stimulation of the brain. The book is a political thriller that both seems like science fiction and also hits close to home.

I’ve never read, nor seen an adaptation of, The Scarlet Pimpernel, so I didn’t realize that Beneath the Shine was a retelling at first. But if you have read and/or seen any of the versions, you might have an idea about the plot (and Percy) before you even begin reading. I really enjoyed Fine’s previous retelling (The Of Metal and Wishes duology is based on The Phantom of the Opera), and appreciate that she draws from outside the standard fairytale catalog with her retellings.

In other news, I really want to read The Scarlet Pimpernel now.

As much as I try to be informed and involved in real life, I don’t typically read political books, or don’t read them as much these days, simply because I want to escape from reality while I’m reading. I do understand why political themes are important, however, particularly in YA books.

I struggled at times to understand some of the terms Fine included in Beneath the Shine, particularly those surrounding the meeting of politics and technology. I don’t think a literal glossary was necessary, but I could have used a little more context surrounding the more unusual terms when they were first used.

You felt a little too real at times, Book, for my comfort, but your message is a pretty important one. I just wish we could have delved deeper into some of your issues…and gotten to know Percy a bit better. Marguerite was cool and all, but I’m more interested in the story of the guy who wears glittery makeup and jackets with tails and how he fits into—and aims to disrupt—your world.

Beneath the Shine is available now.