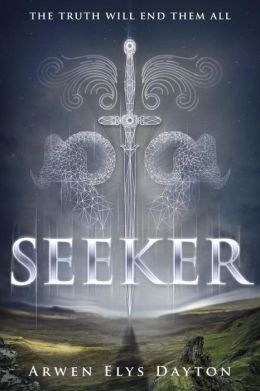 Arwen Elys Dayton’s Seeker has been compared to Game of Thrones and The Hunger Games. The machine is backing it in a big way—I’ve received at least three publicity emails about it in the last month—and, although it only actually comes out in February, it was optioned for a movie TWO YEARS AGO. And it’s true: while I have many, many problems with the book, it does have the potential to make an entertaining (and CGI-laden) popcorn flick.

For years now, Quin, Shinobu, and John have been training in Scotland to be Seekers: righters of wrongs, doers of good, sword-wielding vigilantes. When it finally comes time for 15-year-old Quin and Shinobu to take their vows of loyalty—John fails out—they discover that all this time, they’ve been training to be assassins, not heroes. Rather than using his knowledge and skill to help those in need, Quin’s father Briac has been selling his services, slaughtering entire families in order to fill his coffers.

After an attack on the estate by John—who, it turns out, has been on a Secret Revenge Mission all along—Quin and Shinobu eventually escape to Hong Kong, where they try to leave the past behind: Shinobu, through drugs, and Quin, through self-induced amnesia. But escape is never that easy when Ancient Teleportation Technology is involved....

Positives first. The action sequences are really cinematic: the characters use “whipswords,” which are basically the T-1000 in non-sentient, weapon form; there is a scene that involves base jumping off a skyscraper onto an airship while shooting fireworks at said airship as a distraction. And…that’s all I’ve really got.

Dayton switches up the focus on a chapter by chapter basis, rotating through the four main characters—and sometimes even time periods—which, for some readers, combined with the aforementioned action sequences, will help to keep the momentum going. Others will be stymied by the lack of character development; by the dialogue, which is full of Dramatic Pauses (often several to a sentence) and plot-convenient interruptions; and by the prose itself, which is full of cliches—John has “...storms in his blue eyes…”, for instance, and Quin’s mother’s beauty is like “...a warm spring sun coming out from behind heavy clouds.” And then there’s the repetition (multiple explanations of how to pronounce “athame”; John’s handsomeness); the telling over showing ( “her dark eyes were full of doubt”); and the lines that combine many of those elements into moments of flat-out awkwardness:

“My mind is a muscle that’s always slightly tensed,” John responded, quoting Alistair, who was their favorite instructor.

The villains are one-note moustache twirlers, driven purely by hatefulness and greed (and bonus misogyny). Briac’s method of bringing new Seekers into the fold—lie to them for years, then force them at knifepoint to swear fealty to him and the Order—makes no sense. For one, how in the world would that result in allies/employees he could depend on, and for another, if he’s already broken every Seeker rule ever, why not just hire on some goons who’d likely be more comfortable with evil-doing?

Quin is the Heroine and John is the Tragic Figure. Shinobu, being half Japanese, has a stereotypically strong sense of “manners and honor”; his mother’s basement in Hong Kong has, go figure, a “strong sense of Asia”; and he goes into the final battle wearing ill-fitting antique samurai armor because…well, I never entirely figured that one out. Maud the Young Dread, a girl from the distant past, is the most potentially interesting character, but she never transcends her Stoic-Yet-Angry Warrior archetype. Like the characters, the worldbuilding is thin at best, in that it mainly consists of capitalizing certain words (Seeker, Dread) and tossing a few steampunk elements into the mix.

My suggestion: Wait for the movie.