A Sense of Quiet Happiness 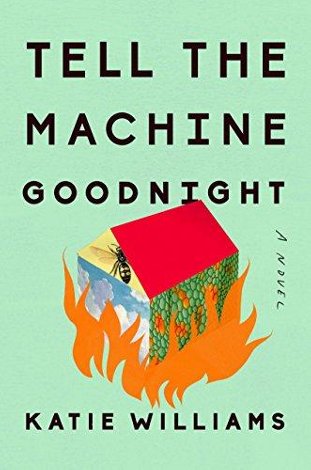 What is happiness, exactly, and how do we achieve it? What if there was a machine that could use a swab of your DNA to come up with the answers for you?

That is the premise of Katie Williams’ first adult novel, Tell the Machine Goodnight. In a not so far future, Apricity is the Happiness Machine, a piece of technology that uses DNA to come up with solutions, ways for people to find happiness, usually in the form of an itemized list with three entries. Those could range from the absurd to the banal, from cutting the tip of one of your fingers to taking up knitting. The gist is the same though: if you follow all three recommendations, your life will change and happiness will be found.

Pearl is a technician with the Apricity Corporation, a customer service representative in charge of seeing paying customers through the process of acquiring happiness, from the first swabbing to talking them through the results. Her own results when she took up the test herself have proved satisfactory and she now lives a life of mild contentment.

There is one aspect of her life that is a source of concern: her son Rhett. All she wants is for him to be happy too, but for Rhett, that feeling seems to be as elusive as touching a ray of sun. Rhett was recently hospitalised for an eating disorder — he was forcibly fed when at the hospital and that horrible feeling of losing control has been following him ever since. He will not cede control of his life to a Machine.

Pearl and Rhett’s relationship is fraught with the unsaid things that lie between them and it takes a turn for the worse when Pearls takes a swab of his DNA without his knowledge and runs an Apricity test. The unexpected results come back with only an asterisk, meaning that his way to happiness is so terrible, the Machine will not list it.

With chapters that alternate between Pearl, Rhett and a number of other characters — including Pearl’s boss as well as her ex-husband — the novel offers a look slowly progressing in time and following the lives of these people in pursuit of happiness. It is also a novel about technology, our reliance on it, an examination of the bias built into the system, and more.

Apart from Rhett, most of the characters here are not exactly likeable but wholly human and incredibly fallible. It is hard not to empathize with the mother who just wants what is best for her son and for him to be happy, just as much as we understand the utter horror of when she crosses the line in making decisions for him. Rhett’s chapters are decidedly the highlight of the novel for me: beautiful, harrowing, respectful, offering a character arc that is profoundly moving in how it shows his decision to take control of his own life and happiness. It was great to see his deserved happy ending.

There are fewer pleasures in life than reading a high concept novel that is as quiet, contemplative, character-driven as this one.