Sequels in 2018 (Inspired by The Defiant Heir by Melissa Caruso) 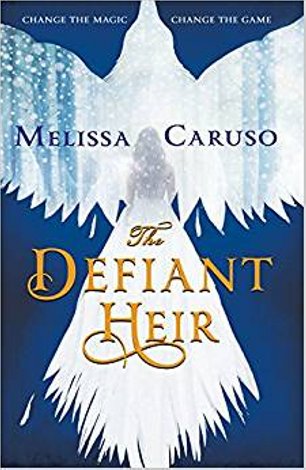 I love a good series. On the whole as genres, science fiction and fantasy tend to go hand-in-hand with multi-volume sagas—which means I’ve picked the right fandom to satiate my endless hunger for stories.

In addition to being a voracious reader, I’m also a compulsive planner—I like keeping track of the books that I have read the previous year, and then use that list to target books I need to read in the current year. It was in this new release research cycle that I realized: there are a lot of damn great series’ with sequels dropping imminently.

That means there is time for you to catch up on some truly awesome SFF right in the nick of time! Here’s a list of some recent and soon-to-be released sequels coming in 2018.

The Defiant Heir by Melissa Caruso (Swords and Fire #2). Last year’s The Tethered Mage was Carusso’s debut novel, set in a historical fantasy alternate version of Venice. Following a young noblewoman, heir to a seat of power on the Raverran Empire’s ruling council, and the powerful female mage she has tethered, this first novel featured strong worldbuilding, political intrigue, and beautiful development of the tension and ultimate partnership between its two central heroines. Book 2 is out on April 19th and follows Lady Amalia and Zaira as they make a desperate gamble to defy orders and collaborate behind enemy lines in order to save the empire from disaster.

The Speaker by Tracee Chee (Sea of Ink and Gold #2). Technically, this sequel came out at the end of last year, but this is such an under-discussed series I had to put it on the list. The Reader followed a nomadic sneak-theif named Sefia, who has lost everything—her parents, her home, and at the beginning of the novel, her aunt—murdered by shadow Guards. All Sefia knows is that she must keep the object for which everyone she’s loved has died safe—a heavy, thick rectangular item, with the power to topple worlds. Sefia carries a Book—and the book contains magic far beyond anyone’s reckoning. Along her journey, Sefia meets Archer—a boy with a prophecy tied to his future, and who was also ripped away from his family but forced into a life of fighting for the profit of his masters. Together, the unlikely pair flee assassins and armed guards, befriend pirates, and learn the magic that lies in words. Book 2, The Speaker, picks up immediately following the pair’s daring escape at the conclusion of The Reader and is available now (November 7).

Muse of Nightmares by Laini Taylor (Strange the Dreamer #2). I have a love/less-than-love relationship with Laini Taylor’s work. I love the ideas and the worldbuilding that go into Taylor’s novels--the premise behind The Daughter of Smoke and Bone, for example, was utterly awesome. The execution of those ideas, particularly as a series goes on, is where things get a little wobbly for me. Strange the Dreamer begins strong, following a young librarian as he conducts his research on a City, whose name one day was plucked out of the minds of any living creature and replaced with a single word: Weep. Lazlo is convinced that this must be evidence of magic, and is desperate to discover the truth of Weep, no matter what the cost. Lazlo’s journey takes him from the safety of his library to cross deserts and far empires, where his adventures become entangled with those of five blue-skinned godlings, with the powers to control the dead, to raise fire, and even to harbor nightmares. While the ending of Strange the Dreamer becomes a little melodramatic, I am still on tenterhooks for Muse of Nightmares, out this fall (October 2).

Tess of the Road by Rachel Hartman. Technically, Tess of the Road can be read as a standalone novel—however, I believe that your reading enjoyment will be greatly heightened if you’ve read Seraphina and/or Shadow Scale first. This new spinoff novel is set in the same world as Hartman’s Seraphina—a medieval kingdom called Goredd, in which humans are humans, dragons can assume human form, and human-dragon hybrids are anathema. Tess of the Road follows a young woman who has a tendency to cause trouble, and after the chaos she unleashes at her sister’s wedding, Tess decides to hit the road and not look back. Along the way, she discovers an old dragon friend and plenty of adventure, but also must come to terms with her own complicated past. This particular sequel is out on February 27th (so soon!) and I cannot wait.

Noumenon Infinity by Marina J. Lostetter (Noumenon #2). Oh, how much I loved Noumenon. Marina J. Lostetter’s debut novel in 2017 followed a different kind of generation ship—one filled with genetic clones, instead of stasis pods—as it made its way towards an unknown structure (a noumenon) in the depths of space. What the crew discovers on its journey and takes back on its return trip to Earth is only one part of the story—the real reason Noumenon is so awesome is because of the evolution of its characters. Lostetter shows how a society of population-controlled clones aboard a ship in a closed environment over generations evolves—and the differences in how Earth evolves in parallel over the same period of time. Noumenon Infinity tells the story of the return to the alien structure in space—and is easily one of my most highly anticipated books of 2018 (August 14).

City of Bastards by Andrew Shvarts (Royal Bastards #2). Last but certainly not least is Andrew Shvarts’s delightful Royal Bastards—which follows, you guessed it, a bunch of bastards. That is, bastards in the sense that they are illegitimate children of powerful royal figures. Tilla, our heroine in this fantasy series, has struggled with her illigitimacy all her life—her father, powerful lord of the House of Kent—seemed to dote on Tilla when she was his only child, but pushed her away upon the birth of his full-blood children. When Tilla and her fellow bastards stumble upon a conspiracy to kill a princess and frame the Western Province for her death to spark a war, it is up to the bastards to keep this princess safe and save the day… except, well, things get a little complicated. In City of Bastards, Tilla and her ilk have stopped a conspiracy and have found a new home in the capital city of Lightspire—but war is coming, and it is once again up to Tilla to uncover the truth behind a rash of attacks and murders that threaten her friends and her kingdom (June 5).

So there you have it! A list of highly anticipated sequels (and their highly recommended predecessors). Any other upcoming sequels to add to the list?