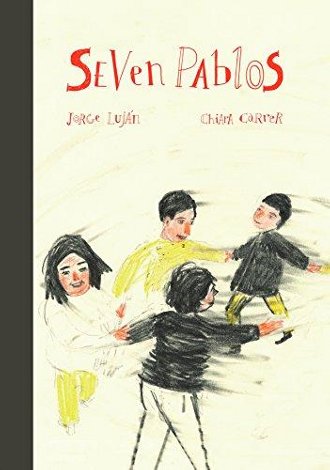 There are multiple reasons why it’s a good thing for children to read about the lives of people who live in other countries and cultures all across the globe. They learn to understand and respect people different from them; they are able to put their own lives into context with regard to ethnicity, religion, culture, race, privilege (such as, economic privilege), and more; and they learn about things like geography, history, and cultural anthropology.

Besides, children who are trying to make sense of the world are naturally curious about such things, eager to learn about the differences in the ways people live and the circumstances and customs that are a part of their lives.

Enter an unusual and reflective new picture book on shelves, written by Jorge Luján and illustrated by Chiara Carrer. Translated from the Spanish by Mara Lethem, Seven Pablos (on shelves next month) addresses the lives of seven different boys (all with the same first name), who live in both South America and North America.

Each boy is introduced, and a brief amount of information is shared about his life, over the span of two spreads. We go from Chile to Mexico along the way: We meet Pablo in Chile, whose father works in a copper mine; Pablo in Ecuador, whose home is in a very remote location; Pablo, who is from Argentina but lives in Mexico after his family escapes the military dictatorship that “ravaged their country”; Pablo in New York, who is the son of immigrants from Guyana; Pablo in Peru, the son of a teacher and grandson of the former mayor of Lima; Pablo in Rio de Janeiro, who picks through the garbage to find things he can sell for food; and Pablo in Mexico, on his way via train to the U.S border.

This is a picture book that includes more than one complex and hard-hitting subject, yet it does so without overwhelming the reader. It’s a fine line, because to be sure, every reader is different, and some children may feel despair over the struggles in some of the boys’ lives, but I do think the author manages to temper the gravitas. He succeeds in doing so, partly because he scratches the surface of the lives of these children, leaving in between the lines thought-provoking questions for readers about the lives of these boys and where they might go from here. Too much detail would have perhaps made for a grueling children’s book, not to mention a much longer one. Instead, what we have here is a book that isn’t afraid to speak the truth to children, yet it can serve as an effective conversation-starter, particularly in classrooms.

The stories include such things as parents who engage in exhausting physical labor; families who flee war-torn countries, due to military rule; homelessness; violence; hunger; and more. There is a poignancy to Luján’s writing. In the first story, we meet Pablo and his father, who live in Chile. His father works as a miner, Luján writing:

“When Pablo’s father returns home, he quickly eats whatever he can find and

collapses into bed. Pablo approaches, careful not to wake him. When he puts

his hand on this father’s chest, it feels like he’s touching the center of the earth.”

In another story, we read about the Pablo who lives in New York, but whose family has emigrated from Guyana. Pablo and his family share a single room in the Bronx with other family members; they get twelve hours in the room but twelve hours on the street, taking turns with the cousins, aunt, and uncle. When a poet visits Pablo’s school and asks everyone what they want to be when they grow up, Pablo replies: “I want to be a big guy in a uniform, because I want to beat people up and get away with it.” Without even flinching, the poet asks Pablo to note this on paper and to draw it – not to show to the principal, he promises Pablo. But then he asks the boy: “Would you like somebody to get away with doing that to you?”

Pablo, “flustered,” rips up his paper in response. It’s an honest, powerful moment. It’s also one to which many children – not just immigrants from war-torn or more economically disadvantaged countries – can relate, this moment in which a boy considers overcoming tendencies towards anger and violence.

I am partial to picture books illustrated in either charcoal or pencil, and here, illustrator Chiara Carrer uses the latter to create evocative, atmospheric portraits of these boys and their lives. After we read about Pablo in Mexico, whose family escaped a military dictatorship, we turn the page to see a striking spread showing a line of soldiers — all rigid lines and dark shadows. Red and yellow are used sparingly throughout the book to bring pops of color. The yellow hues on the final spread, where Luján reminds readers that there are “many Pablos … [with] a heart that beats with the same rhythm,” are like rays of sunlight and hope.

The Kirkus review calls this one a “necessary reminder of young lives often unseen.” Indeed. Compelling and moving, it’s unlike any other picture book you’ll see this year.