She Got That Ambition, Baby 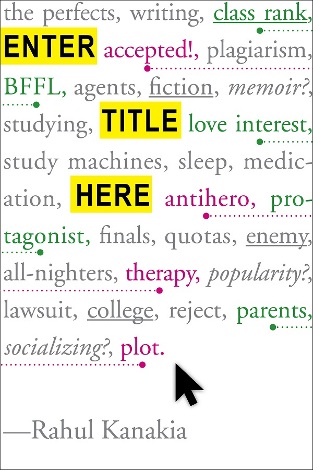 Cover Story: What You See Is What You Get
BFF Charm: Caution!
Swoonworthy Scale: 5
Talky Talk: Work in Progress
Bonus Factors: So Meta, Rage Against the Model Minority Myth, Dark Underbelly of Academia, Mean Girls
Relationship Status: The Friend That Keeps You on Your Toes

Cover Story: What You See Is What You Get

I mean, sure; this is a perfectly serviceable cover. The book's been distilled into search terms, although there doesn't seem to be any rhyme or reason to the formatting other than visual aesthetics.

After she writes an opinion piece that catches the attention of a literary agent, Reshma Kapoor sees an opportunity to make her Stanford application stand out: she's going to get a book deal. (How hard could it be, right?) But this overachiever is out of her depth when it comes to friendship and dating, so she has to rack up some firsthand experiences ASAP. And trust, this girl's going to do whatever it takes to get what she wants.

Reshma Kapoor is an ambitious and ruthless perfectionist in the mold of Tracy Flick. I do admire her drive and self-confidence, but with the same respect you'd show to a bear or a shark as something that could EAT YOU ALIVE. Reshma's definitely someone whose good side you'd want to stay on, but don't even think about befriending her if you're not on her level. (Besides, she's not here to make friends.)

In need of an insta-boyfriend, Reshma has her sights on an easy target in Aakash, the nerdy classmate who has a crush on her. But she also has another potential love interest right under her nose—sometimes quite literally, as track star George, the son of a family friend, lives with the Kapoors in order to attend Reshma's prestigious school. Aakash falls for her shizz while George sees right through it, so you can probably surmise that Reshma's love life doesn't go according to plan.

Written as Reshma's manuscript, her first-person narration frequently acknowledges structure, plot, and characterization. Her blind spot, though, is failing to realize she's the villain in her own story (TM Crazy Ex-Girlfriend) – but not for lack of trying to call her out on it by the rest of the cast. The 'unlikable' label gets tossed around a lot in literary circles, but very few characters are as actively, brazenly unlikable as Reshma – which, in turn, makes her even more compelling to read about.

Enter Title Here barely has a fourth wall, with many of the supporting characters aware of the manuscript, if not having read parts of it themselves. My favorite of Reshma's beta readers is her therapist who has literary aspirations of his own and constantly encourages incorporation of murder into her contemporary high school novel. (This ain't Rosewood, dude.) There's also some tongue-in-cheek humor with Reshma's dismissive attitude towards writing and literature that's bound to resonate with readers and writers alike.

It should be flattering, shouldn't it, to be assumed to be exceptionally smart? That just goes to show how well you're doing as a group, doesn't it? But even a 'good' stereotype can be harmful. Claims that Asian-Americans applicants are held to higher standards for college admissions aren't unsubstantiated, and it's a theory that Reshma subscribes to. Her pain at having to be, to borrow from Scandal, "twice as good to get half of what they have" practically radiates off the page.

When the competition is fierce, some people will do anything to gain an edge – even if that means verboten shortcuts. No, this isn't referring to the ongoing Olympics, but the intellectual arena in which Adderall and plagiarism are the enhancements of choice.

While Reshma's high school clique breakdown isn't unique to Mean Girls, the use of a certain iconic line might suggest that Rahul Kanakia is a fan.

I initially pictured Utkarsh Ambudkar, but there's one specific comment about George's hair that immediately made me switch to Avan.

Relationship Status: The Friend That Keeps You on Your Toes

Equal parts fascinating and frightening, this book's protagonist is audacious and magnetic. With her making the rules of her own story, I was never quite sure what the next word out of it would be, but I knew I'd be riveted.