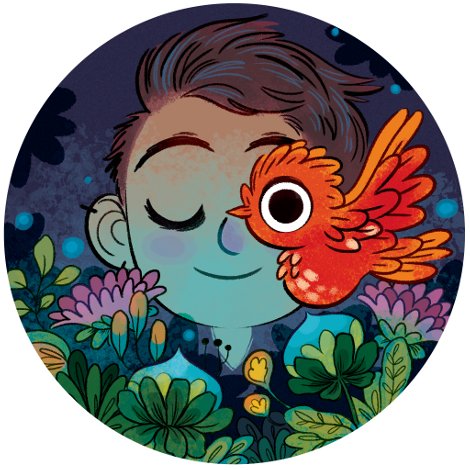 An open-ended story about creativity and overcoming fears—a tale that is, at turns, dark and comforting—Nighlights is the writing debut of Colombian illustrator Lorena Alvarez. It’s the story of a young girl named Sandy, who attends a Catholic school. At night, she catches little lights that float around her room, and she turns

them into the stuff of her vivid imagination. The detailed illustrations of this graphic novel, ones that bring readers the protagonist’s night visions and mental landscapes, are captivating, the Kirkus review noting that Alvarez “has drawn a world that harks back to her native Bogotá and days in Catholic school.”

Things take a creepy and confusing turn for Sandy when she befriends Morfie, a ghost at the school. Morfie can transform herself into frightening, malevolent creatures. She’s a presence who threatens Sandy’s very imagination.

I talked with Lorena (her self-portrait is pictured above) via email to learn more about this memorable story about one girl’s inner world.

Jules: How much did you mine your own childhood experiences at a Catholic school for this story?

Lorena: My memories from those years at Catholic school certainly helped me to give Sandy a solid character background and to create an environment that would contrast with her imagination and define her place in a social structure.

My school had a very particular atmosphere; it was a nice place, but there were some parts of it that were kind of scary and mysterious, like the Chapel or the Labs. And there were the nuns who had entire routines out of our sight. We couldn’t quite understand their lifestyles, and we wouldn't dare to ask. We used to make up creepy stories about them – about ghosts that haunt the school at night or how the backyard was, in fact, a cemetery.

Jules: Isn't this the first time you've both written and illustrated a story? If so, what'd you enjoy about the writing and do you think you'll do it again?

Lorena: Yes, this is my first book, and I’m planning to write more. It is a good experience to take your own ideas, nurture them, and see them grow and materialize in a story you can share. I feel that I am still learning how to be a good storyteller, and I really enjoy the whole experience.

Jules: I read that, with regard to your art, you like to "experiment with diverse techniques." Can you talk about how you created the artwork for this book?

Lorena: The coloring process is quite conventional – Photoshop combined with scanned handmade textures. But this time I could experiment a lot with perspective and composition in my drawings and the story layouts. Drawing urban spaces—and the people who inhabit them—allowed me to see my city from a different point of view.

This project also involved a deeper level of research to create the characters and the worlds they live in. I had the opportunity to speak with other women and girls about their experiences in Catholic schools and examine my own memories, the places I used to live in, and the social dynamics I had to deal with while I was growing up.

Jules: As a child, did you have dreams as vivid as Sandy does?

Lorena: The idea of Nightlights came from a very early memory. When I was a kid, I used to stay awake at night, and I could see little color dots in the dark, like glitter. I used to imagine that I could catch those dots and release them, while drawing any shape I wanted.

I used to play alone and, like Sandy and many kids, I liked to draw a lot and create my own characters and stories. I've always been kind of a daydreamer.

Jules: What's next for you? Will there by more stories about Sandy?

Lorena: I'm working on that, and I'm really happy about it! I welcome every opportunity to learn something new. This book—creating Sandy and the universe around her—has opened a new door to create new stories and become a better writer.