We talk to Greg Newton, Co-owner of the Bureau of General Services—Queer Division 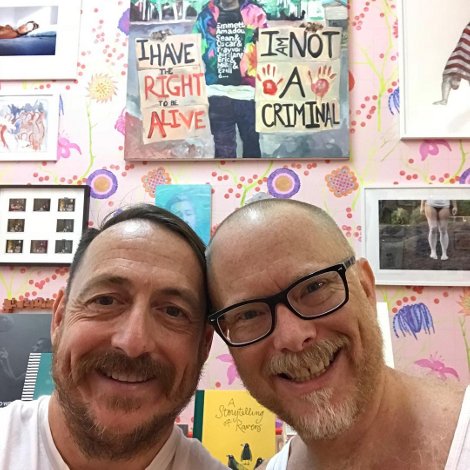 The Bureau of General Services—Queer Division first launched as a pop-up bookstore in an art gallery on New York City’s Lower East Side in 2012. The opening was especially welcome after Manhattan lost two iconic queer bookstores—A Different Light and Oscar Wilde Bookshop. Thanks to community love and support for the Bureau, co-owners and partners Greg Newton and Donnie Jochum have kept it running continuously since its pop-up opening and, in 2014, found a home for the bookstore at Manhattan’s Lesbian, Gay, Bisexual & Transgender Community Center. Here we talk with co-founder Greg Newton about a bookstore that doubles as a “queer church.”

How would you describe the Bureau of General Services—Queer Division to the uninitiated?

The Bureau is a governmental agency for a government that does not yet exist. The primary service that the Bureau provides is holding space for queer people and queer culture. We are an independent, all-volunteer queer bookstore and event space located in the LGBT Community Center in Manhattan. The Bureau offers queer books, magazines, zines, art, and other cultural materials for all to explore, and we host all kinds of programs—from poetry workshops to film screenings and readings. We’ve hosted collage-making and puppet-making parties, zine fests, sex-magic workshops, and presentations by artists, activists, scholars, and other members of the queer community at large.

If the Bureau were a religion, what would be its icons and tenets?

We actually dreamed of having an icon wall when we were starting out. The icon wall would definitely have featured images of Grace Jones, Joan Jett, Freddie Mercury, Boy George, Madonna, and other beloved pop-culture figures who were important to Donnie and me as young queers finding our way in the world in the 1980s. We haven’t made an icon wall yet, but who knows?

I survived growing up in a passionately evangelical Christian home, and I do sometimes feel like what Donnie and I have started is a queer church. Of course, this church radically differs from the churches of my childhood in that it embraces and lifts up queer people.

If the Bureau were a religion, our central teaching would be to love yourself and to love one another. As queer people, we know the pain of being demonized, pathologized, criminalized, and silenced. These experiences teach us about the dynamics of ostracism of characterizing people as “others” not worthy of love and empathy. Our religion would cultivate empathy and compassion while exposing and confronting our fears of the unknown—both within ourselves and beyond—that lead us to falsely locate the source of our fears in other people, be they queers, women, people of color, the poor, the disabled, or anyone who is somehow deemed foreign.

One of my favorite events was the Bureau fundraiser that Justin Sayre hosted for us at The Pyramid Club in August 2013. The Bureau wasn’t even one year old yet, but so many lovely and legendary artists joined in to support the project and make a very special event, including Penny Arcade, Jack Waters and Peewee Nyob, Earl Dax, Shane Shane, Max Steele, Nicholas Gorham, Karl Marks, Linda Simpson, M. Lamar, Dan Fishback, Gio Black Peter, Brett Every, and Mx. Justin Vivian Bond, among others.

How does the bookstore reflect the interests of your community?

Most of our events are initiated by queer authors, poets, performers, scholars, artists, filmmakers, healers, and activists. Our idea is to serve as infrastructure—the necessary bureaucracy—for the queer communities of New York and for queers visiting from all over the world. We maintain the space, the vehicle, while the community provides the content. Of course, we set the tone by establishing the space as a do-it-yourself queer cultural community center that embraces a utopian vision of queer liberation, and this attracts like-minded individuals and groups, but we say “yes” to all sorts of events and materials—for the most part it’s the community that determines our programing and offerings.

What are your favorite handsells?

I love to share José Esteban Muñoz’s Cruising Utopia with people—I fully embrace his vision of queerness: “Queerness is essentially about the rejection of a here and now and an insistence on potentiality or concrete possibility for another world.” Audre Lorde’s Sister Outsider is another staple I recommend to anyone seeking queer visions of liberation.