We talk to Jan Weissmiller, co-owner of Prairie Lights 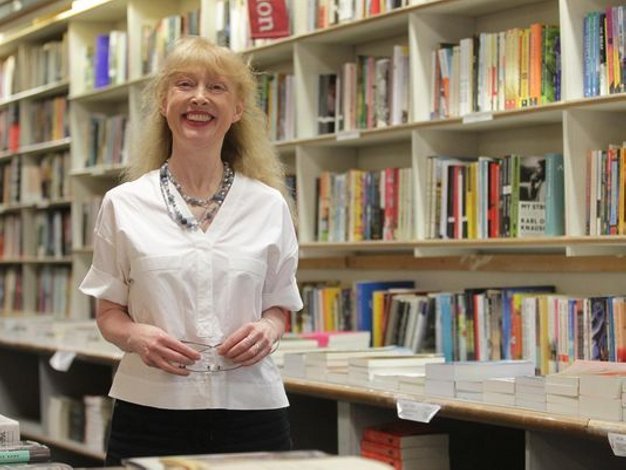 Iowa City’s Prairie Lights started small in 1978 and shelved the then-newer voices of Alice Munro and Raymond Carver alongside heavy hitters like Eudora Welty and George Orwell. The general bookstore expanded to three and a half floors (the half is home to Prairie Lights’ cafe) and hosts a celebrated reading series broadcast live on WSUI and WOI. We spoke with poet and co-owner Jan Weissmiller about life at the legendary indie.

How would you describe Prairie Lights to the uninitiated?

Prairie Lights Books was founded by Jim Harris in 1978, a time when Iowa City was without an independent bookstore. Jim is a vibrant, smart, and eccentric person, and under his unique stewardship, the store developed its distinct identity. The store is heavily stocked with current and classical literature and books on nearly every subject. Our full floor of children’s books and our lively cafe are also draws. Prairie Lights benefits from being located in the hometown of the renowned Iowa Writers’ Workshop. This has led to a very particular intermingling of writers and readers in our store. The conversations that revolve in and around the readings are one of the most notable aspects of Prairie Lights. Our large and talented staff creates an atmosphere defined by humor and curiosity.

If Prairie Lights were a religion, what would be its icons and tenets?

Religion is a freighted word, especially these days, but Prairie Lights does have a goal that many religions purportedly share: peace. Our icon is a “Read for Peace” T-shirt. Our tenets include the belief that reading fosters empathy, as do both the constitutionally protected freedom of speech and the establishment clause of the Constitution: separation of church and state.

The most memorable moment in the history of Prairie Lights was having President Barack Obama here in 2010. He was giving a speech in Iowa City to celebrate the passing of the Affordable Care Act and pointed to Prairie Lights as a small business that would benefit. He stopped in to shop afterward. We didn’t have to clear the store, and our customers were as thrilled as we were. He plucked Mitt Romney’s No Apology from the shelf and laughed about whether or not he should buy it. I told him we carried it in the spirit of freedom of expression. When I think of disasters, I think of having Annie Proulx here to read from The Shipping News just after it was published but before it won the Pulitzer Prize. It snowed, and we had six people in the audience.

How does the bookstore reflect the interests of your community?

Iowa City is the only UNESCO City of Literature in the U.S., and it’s defined by the storied and flourishing writing programs here. We hold five or six events a week. We can accommodate 150 in the store and rarely have fewer than 30—unless there’s a blizzard.

We’re selling more graphic novels to both children and adults. Our children’s book buyer, Mary Taft, says that fantasy is still hot but with more futurism and fewer vampires. One young mother told me that her son and his middle school friends are obsessed with the classics. We hope that is a trend!

What are some of the bookstores’ top current handsells?

For the last few months we’ve been handselling Strangers in Their Own Land by Arlie Russell Hochschild, Yiyun Li’s new memoir, Dear Friend, from My Life I Write To You in Your Life, Homegoing by Yaa Gyasi, What Belongs to You by Garth Greenwell, and The Sellout by Paul Beattie.