We talk with the legendary indie bookstore's staff 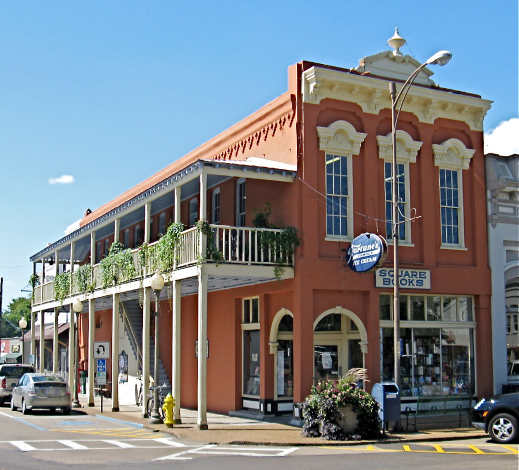 Square Books first opened in 1979 on the historic town square of Oxford, Mississippi. The bookstore, named by Publishers Weekly as Bookstore of the Year in 2013, hosts more than 150 author events annually and is known for its selection of literary fiction, books on the American South and by Southern writers, and children’s books. We talked with General Manager Lyn Roberts; co-founder (and former Oxford mayor) Richard Howorth; and bookseller Paul Fyke about Southern writing, a marathon signing with Allen Ginsberg in 1987, and social issue fiction, a newish YA genre.

What is Square Books famous for?

Lyn Roberts: Square Books has three storefronts—Square Books, Off Square Books, and Square Books Jr.—facing the square in historic downtown Oxford. Oxford is a small town in a state with a larger-than-life literary tradition and is home to the University of Mississippi. Square Books is an integral part of this community but is also part of the larger, even global, community that cultivates close relations with readers and writers. There is a sense of community, born out of love for reading and books, that creates a spirit of respect and fosters an environment where one may feel at home.

If Square Books were a religion, what would be its icons and tenets?

Richard Howorth: Tenet—recommend books to others as you would have them recommended unto you.

Which was your favorite event and why?

L.R.: Over the years there have been many times when readers and writers have been able to meet in an intimate and genuine way, such as in 1987 when Allen Ginsberg had every single person who asked to have a book signed sit down for a little interview and chat before signing (and drawing in) the book. That signing lasted five and a half hours. More recently, Tasmanian Richard Flanagan returned to Oxford in the fall of 2014. He read at Square Books many times since his first trip to the Oxford Conference for the Book in 2000. Having referred to Oxford as his spiritual home in the United States, Mayor George Patterson made it official by issuing a proclamation declaring Richard Flanagan an honorary citizen.

You’ve had fabulous political events in the past. Are you planning anything big for 2016?

L.R.: These simply occur more than they’re planned—but if there were one I could plan, it would be to have Barack Obama come for a signing so we could thank him for being such a fine president.

Paul Fyke: With dystopian fiction finally releasing its death grip on youth readers, an interesting new genre is taking its place: social issue fiction. While social issues present in fiction are nothing new, teens have lately grown much more interested in the social and economic inequalities that are plaguing the world they live in. Starting with the breakout success of Wonder and continuing with titles like The Seventh Most Important Thing and I Will Always Write Back, new novels focusing on social issues become more prevalent every season. I’m happy to see kids reading books that are leading them to think critically about the problems people face in the world. It makes a welcome change to the jaded, cynical attitude that so much of teen fiction seems to have cultivated in the past decade.

What are some of your top handsells?

R.H.: We would like to take the entire staff to visit bookstores all over the world.