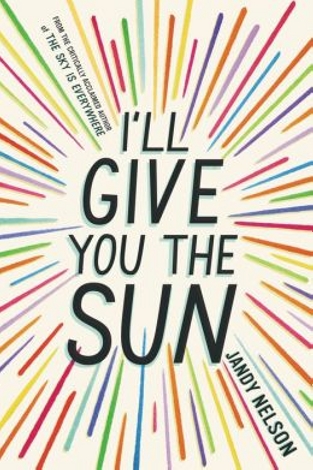 “No one tells you how gone gone really is, or how long it lasts.”

—I’ll Give You the Sun, Jandy Nelson

If you’re a fan of YA contemporaries that focus more on family relationships than on romance (but like some romance in there, too), then make sure that Jandy Nelson’s I’ll Give You the Sun is on your radar.

At age 13, twins Noah and Jude are each other’s everything: They’re so close that they’re practically telepathic, and they always tie at Rock, Paper, Scissors. By the time they’re 16, they’re barely speaking. In alternating chapters, they show us how everything fell apart—Noah’s chapters take place in the past, while Jude’s are set in the present day—and finally, how it all begins to come back together. There is so much hurt—secrets and lies (BIG secrets and BIG lies) and betrayals and heartbreak—but it’s the profound love that they have for one another that’ll make you weep.

Their voices are stellar. As close siblings tend to be—and I’d imagine that it’s even more so with twins—they are intimately familiar with each other’s personal slang and verbal shorthand, but at the same time, their voices are completely distinct. Noah, dreamer, artist and Animal Planet addict, sees and describes the world as future paintings (And because of her hair—I use up all my yellows drawing it. It’s hundreds of miles long and everyone in Northern California has to worry about getting tangled up in it, especially little kids and poodles and now asshat surfers.), and compares people to wildlife (teenage girls as brightly colored hornets—humming and buzzing and dangerous—is especially good). Jude, budding sculptor, collector of superstitions and rare illnesses, is feisty and angry and scared—when she gets going, her words have the rhythm of a boxer punching a speed bag: This boycott isn’t whimsy. To me, boys don’t smell like soap or shampoo or cut grass or sweat from soccer practice or suntan lotion or the ocean from hours spent in the green curl of a wave anymore, they smell like death.

Even better—which is saying something—is the depiction of the two of them as a unit. The sibling rivalry, the desire to throttle AND the need to protect, wanting to establish independence but also feeling the pain of emotional distance. Listed like that, those elements seem contradictory, but Nelson makes them not only work, but feel real and true and almost inevitable. Likewise, the twins’ relationship with their parents—again, as a unit and as individuals—is fabulously well-drawn.

The only real weakness in the whole book comes at the end, when both twins find True Love: Compared to the depth and realism of everything else, the Everybody Works Things Out last chapter just didn’t feel worthy of the rest, especially considering the early strength of Noah and Brian’s arc. But! That was my Logical Side’s take on it—my Emotional Side was too busy blubbering happy tears to care.

Final note! If you haven’t read Nelson’s first book, The Sky is Everywhere, do yourself a favor and pick it up. It didn’t totally win over the Kirkus reviewer, but I LOVED IT.