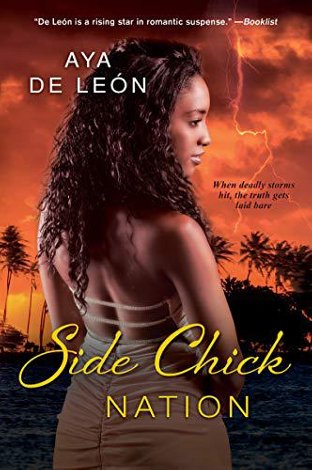 One of the gifts fiction offers us is the ability to discover our world in ways we wouldn’t otherwise, and one of the most amazing things about romantic fiction is that we can explore devastating events with the promise of an HEA.

One of the best books I’ve seen recently to spotlight this capacity is Aya de Leon’s SIDE CHICK NATION, which released this week. (Read the Kirkus starred review here.)

SIDE CHICK NATION follows Dulce Garcia as she tries to outrun her past as a sex worker, then sugar baby and party girl. After a series of set-backs, things look up when she meets a young freelance journalist, Zander, on a trip to the Dominican Republic, but she abandons him for a luxury stay with a rich guy at a nearby resort. Living off her wits, smile, and body works for a while, but with Hurricane Maria looming, she finds herself weathering the storm in a storage unit in Puerto Rico. A creative idea under normal circumstances, but it’s a deadly one during the worst hurricane to ever hit the island. Dulce barely survives, then steps out into a flattened world with no decent water, electricity or medical supplies, and a population devastated by injuries and homelessness.

In her author’s note, de León begins, “When Hurricane María hit Puerto Rico, I was developing a different storyline for my fourth Justice Hustlers book. However, as a member of the Puerto Rican Diaspora, I couldn’t think of anything more important to write about than the hurricane, and my editor and publisher supported me in changing course.” What she has managed to do in this book is take a set of characters who already existed within her series and direct them into becoming brilliant witnesses to and scribes of the challenges facing this part of the world and its people, both before and after María, and in the Caribbean or across the water in the U.S. mainland.

de León goes on to say in her note, “Surprisingly, I have found that heist fiction has proven a fitting genre for this story: as these characters have had to battle law and custom to find small pockets of reparation. Similarly, the extended family of Puerto Rico will have to keep battling laws, customs, history, and entrenched power structures to get the justice and reparations that the island deserves.”

Basically, the heists in the books quietly carry out backdoor, Robin-hood style justice toward unsavory thieves and predators, then use the money to fund a New York medical clinic that helps the underserved, especially vulnerable sex workers.

The book is fierce and tender; angry, but tempered by Dulce’s redemptive arc from mistress to storyteller, though de León takes care to treat Dulce with respect, even when she’s at her worst. She explains to us, as Dulce explains to Zander, that falling back into old patterns is pretty natural when young women don’t know anything else and don’t see many other options. (Dulce’s story is even more complicated, since she’d been groomed into child prostitution by her devious former pimp.)

Once Dulce begins to trust in her writing talent, and is given opportunities to use it, then her life begins to change.

This book is powerful and piercing, brilliantly illuminating the plight of the islands in accessible ways, but it’s also immensely entertaining and gratifying. The fairy tale love story we demand from romance novels is definitely here, and if we and Zander are a little judgmental toward the pre-María Dulce, well, she and de León respectfully (mostly) request that we all check our assumptions.

You should really read this book. It brilliantly uses storytelling to enlighten us and make us question what we think we know about a whole slew of issues, Puerto Rico being just one of them. Yet is also offers a lovely romance, and the most satisfying kind of arc—where the two love interests change for the better. In this case, Dulce experiences life altering opportunities, mainly thanks to Zander, but ultimately has to stand up to him in her authentic glory, demanding that he embrace all of her and everything she is, past, present and future.