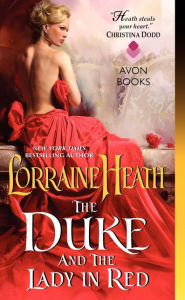 It’s been a pretty big week for me! Seven days ago was my birthday, two days ago I moved my younger son into his college dorm, and I have some exciting new writing projects in the works.

That’s quite a lot, yes? All good, too—though the empty nest thing’s a little weird and occasionally makes me take a deep breath filled with mixed emotions.

I’m also preparing for my various end-of-year favorite lists, and I asked my fans on the Read-A-Romance Facebook page for their faves so far this year. Below are some of their suggestions, which I’m going to borrow for this post. But since I’m asking, what titles would you add?

with the Duke by Eloisa James. A number of people mentioned this book, and I agree with them. This might be EJ’s best book ever. I highly recommend it, and so do the RARM fans!

The Duke and the Lady in Red by Lorraine Heath. The final title in Heath’s Scandalous Gentlemen of St. James series matches a con woman with a duke and includes a poignant secondary character who drives motivation and emotional development. Lovely and special.

Heart-Shaped Hack by Tracey Garvis Graves. I’ve read a thing or two by TGG, but not this one. Looks fascinating though, with a former lawyer–turned–food pantry proprietress and a computer hacker with Robin Hood leanings who gives her anonymous donations. Sounds yummy and intriguing.

Mate Bond by Jennifer Ashley. I’m a huge fan of Ashley’s historicals, but I’ve never read her paranormals. I may have to pick this one up!

Sustained by Emma Chase. This series based in the legal world looks terrific and I haven’t had the chance to read one yet! I had my eye on this title before it came out, but missed it for review. So glad it’s getting rave reviews, at least from RARM fans.

titles I’ve read so far, but this one looks particularly good, as the characters have been dancing around each other throughout the series. The fans vote thumbs up!

When a Scot Ties the Knot by Tessa Dare. This book is brilliant and I’m glad the fans agree. Definitely one of my favorite books this year, though I think all of the Castles Ever After titles are terrific.

If You Only Knew by Kristan Higgins. I’ve mentioned this lovely little book a few times already, so I won’t wax rhapsodic. Anyone who follows me knows that KH is a favorite, so I’ll just say that it’s definitely worth reading.

Again, I’d love to hear your thoughts too! What books should I read before I have to decide on my absolute favorites of 2015?