Something Awesome This Way Comes: New Treasures for Book Lovers 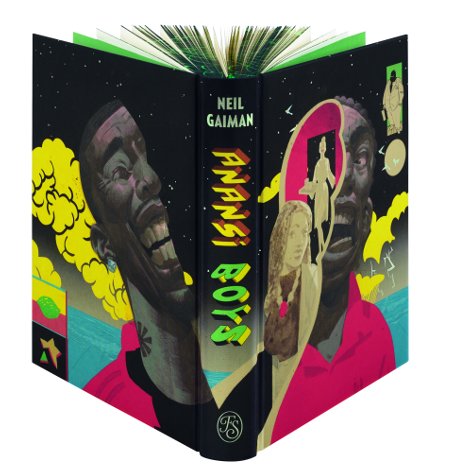 As much as I enjoy reading ebooks, there's something about reading physical books that ebook reading can't ever match. It's feeling the weight of a book, the tactile sensation of holding it and turning the pages that connects me with the book more than the story can alone. Reading is fun and rewarding, but reading high-quality editions of excellent books is a luxurious treat not to be missed. Case in point: the gorgeous editions published by London-based publisher The Folio Society. They've been feeding the addictions of book lovers for decades, and if you're a regular reader of this column, you've probably seen a few of their spectacular editions of science fiction, fantasy and horror classics. I had the chance to hold, feel and turn the pages of two brand new editions of much-loved speculative fiction classics by Neil Gaiman and Ray Bradbury.

Back when Neil Gaiman was writing American Gods, he probably had no idea the trajectory it would take. It went on to win the Hugo and Nebula awards and has since been adapted into a television series that will begin its second season next month. It also received a breathtaking reprint edition from Folio Society last year. However, I'm guessing Gaiman realized the power of the magical world he constructed because a few years later, in 2005, he wrote another book set in the same universe: Anansi Boys. That novel also went on to win multiple awards including the British Fantasy Award and the Locus Award. And, as book lovers' luck would have it, it's the subject of another stunning edition from the Folio Society.

While not a direct sequel of American Gods, Anansi Boys does feature the reappearance of one of its multi-faceted characters: The West African spider-trickster god named Anansi. Or maybe it's more accurate to note his disappearance, because the trickster, nicknamed "Mr. Nancy," has died. His mortal, bumbling son Charlie, unaware that his father was a god—or even that gods walk the Earth—travels from England to Florida to attend his funeral. There, Charlie learns the true nature of his lineage. He also learns that he lacks supernatural powers like his old man because they were given to a brother Charlie didn't even know he had. Only half-believing, Charlie summons his brother, Spider, into his life. Spider was unaware that his father has died and sees the new relationship with Charlie as a chance practice his trickster ways, thus beginning a series of events that change the path of Charlie's life forever, and definitely not for the better.

Gaiman's magical novel elicits a fantastic sense of wonder that is at once believable and engaging. That same magical feeling exudes from the Folio edition of Anasi Boys. You know it's something special from the first time you look at it. The colorful, multi-textured slipcase is alive with curious imagery, including Anasi himself, that entices you to learn more. Extracting the book from the case yields another burst of color with equally surreal and intriguing imagery that includes Anasi's sons. The chapter heading imagery features a sequential story all by itself. Even the edges of the book are adorned with green spiderwebs against a black background, a detail that speaks volumes about the publisher's love of the printed word. This isn't a garden-variety book—it's a treasure.

Chalk up a significant part of that to the excellent artwork of Francis Vallejo, who illustrated the slipcase, the cover, and a good handful of interior images as well. I asked him about the illustrations he did for this new edition of Anansi Boys, which seem to be even more surreal than his usual works of art. "This was my first science fiction project so I knew I wanted a new approach for these images," Vallejo says. "The various locales and larger-than-life personalities suggested a bold approach and that translated to my palette. I was influenced by Tadanori Yokoo and allowed his dream-like acidic palettes to influence my work."

That bold approach shows. Vallejo's illustrations bring Gaiman's words to vivid life. How did he choose which scenes to illustrate? He looked to the text for scenes that gave him inspiration. There were many. "I originally had 94 passages selected that I considered worthy of exploration," Vallejo recalls. "Gaiman is a favorite among artists because of his lush and vivid scenes so it was a wonderful problem to have so much to work with. I doubled the number of illustrations from the original commission as I was so inspired by the story."

Vallejo used a variety of techniques to create an impressive array of illustrations. "The ink images were nib on paper with digital tone. The color images were rather experimental, but combined acrylic, ink, pastel, and oil stick finished digitally. In depth photographic reference was shot for each scene using incredible models that really put themselves into the characters. For the interior bedroom scene, a 3D model of the room was created to assist in creating a reference for how the lighting would look." Indeed, it's an experience to watch Vallejo work.

Anansi Boys includes an informative introduction by Nalo Hopkinson, who was as an early reader for Gaiman and advised him on Caribbean dialogue. She talks, among other things, about the Anansi myth and at once readers know that they're about to enter a magical world. I can think of no better way to get there than through this beautiful volume.

Something Wicked This Way Comes by Ray Bradbury

Ray Bradbury's lyrical dark fantasy novel Something Wicked This Way Comes is about two thirteen-year-old boys on the cusp of adulthood: Jim Nightshade and William Halloway. One October night in their small American Midwest town, a carnival arrives by train. Cooger & Dark's Pandemonium Shadow Show is unlike anything they have ever seen before. On the surface it appears like a regular traveling carnival, but underneath is where the danger lies. Behind the smoke, mazes, and mirrors there are nightmares; terrors that draw in the local townspeople and enslave them forever.

Much has been said about Bradbury's classic and its enduring appeal. It can be viewed as an allegory of the struggle between good and evil, sure, but the book also deals with ever-relevant themes of age and mortality. Bradbury's prose style wonderfully shows us these themes through a nostalgic lens, making the story remarkably relatable. But it's also unsettling; the book is simultaneously about confronting your fears as depicted in Will's and Jim's experiences with the carnival. All of these elements taken together support the consensus that this story is one of the finest literary works.

Surprisingly, in all of the years that this 1962 classic has been reprinted, it had never had an illustrated prose edition. That changes now with a new, beautifully illustrated Folio Society edition of Something Wicked This Way Comes. Illustrator Tim McDonagh was the perfect choice to depict Bradbury's carnival of horrors. His artistic style often contains a bright color palette—in this volume predominantly reds and yellows—that matches what you might see at a carnival attraction. "When first starting on the project, I hadn't intended them all to be red and yellow," McDonagh says, "but as I went on and started to play around, I thought a uniformed color palette for all of the illustrations seemed to constrain some of the craziness. I think the yellow and the red give it a carnival feel crossed with some menace, like much of the imagery contained within the book."

Bradbury's story gave him plenty of ideas. "There's so much imagery in the book that was a lot of fun to interpret in my own way but on top of that was Bradbury's style of writing. It's over the top, outlandish and a little bit manic throughout the book and I wanted the illustrations to reflect that. I just allowed myself to get carried away with the imagery."

One sequence in particular was inspirational and demanded the most time. "The illustration where Mr. Dark is leading his whole carnival troupe took the longest to sketch up and bring into its final form, simply because it's probably the most detailed one of the lot. It has lots of faces and poses that took a while to get right but it's probably the one I'm happiest with and drawing all of the crazy expressions was a lot of fun."

McDonagh's work is more than just a passive experience for the reader. It demands your attention. You can practically hear the carnival barker trying to get you to look his way. Do so. It's all the more reason for viewers to pay particular attention to the amazing amount of detail in the artwork itself, where lines play as much a role in the overall image as the shapes.

Folio Society's colorful new edition also comes with a gorgeously detailed cover and a sturdy slipcase. Actor/Comedian Frank Skinner provides an insightful, spoiler-free introduction professing his love for this dark fantasy classic. If you're going to own it, this is the edition to get.