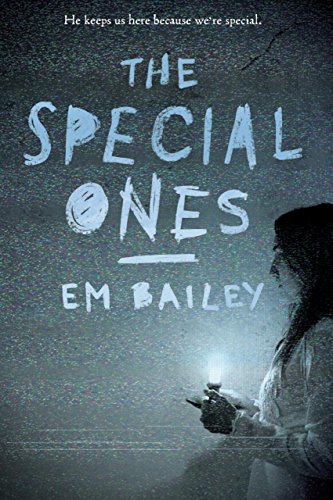 I know only too well what happens to the new ones who are brought here. Gradually they are convinced to change, molded to be who we tell them they are. But there’s another unanswered question: What happens to the ones who leave?
—The Special Ones, by Em Bailey

They live wholesomely, safe from the dangers of the outside world.

But there is danger within the walls of their compound, because he is always watching. He has cameras everywhere, he monitors their interactions with the followers, he metes out punishments as he sees fit… and he decides when it’s time for one of the Special Ones to be replaced.

Books I thought of while reading The Special Ones:

Margaret Atwood’s The Handmaid’s Tale: I’m in the middle of a really close read of this one at the moment, which certainly results in seeing parallels in almost every other story I encounter, but these connections aren’t a stretch. Like The Handmaid’s Tale, The Special Ones deals with the idea of imprisonment—of a lack of rights—as safety, and it has the same anachronistic feel, in that Esther wears a corset and petticoats and churns her own butter, but also uses email to interact with her followers.

The Special Ones is reminiscent of lots of other books to be sure, but it’s still a solid, original story in its own right. It’s claustrophobic and smart—and unusually in a story like this, actually provides specific details about long-term life on the farm like how the older girls contend with their periods. It’s about trust and sacrifice and morality, and considers the lengths to which people will go—the harm they will do to others—in order to survive.

It deals with power dynamics and with the subtext of communication—how to relay information while you’re being watched, how to express yourself or ask a question without the watcher noticing that you’re doing it. It deals with celebrity, how we build people up and tear them down again, and it deals with the attitude of male ownership over female bodies—of how some men feel entitled to the object of their “affection,” whether said “object” is into it or not. It deals with culture shock and with how hard it is to adjust to an entirely different way of life, and with how it can be almost harder to adjust to having more freedom and more free time than it is to having less.

It’s not a perfect read—the ending is extremely emotionally anticlimactic and somewhat rushed, and once he becomes an actual character on the page, the tension takes a nose-dive. But! It’s a book that I blew through in one sitting, and certainly strong enough to prompt me to order a copy of the author’s previous book.