Spin Me A Tale 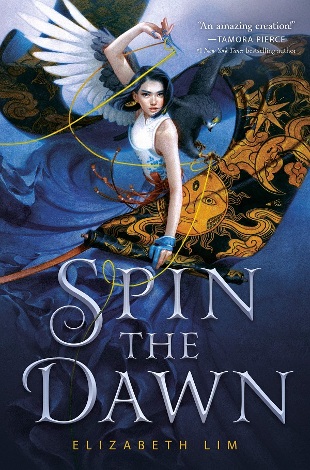 This cover by Tran Nguyen is gorgeous. And it's loaded with details from the book. (The scissors! The hawk! The blue skirt that's evocative of the ocean!) But dresses totally aren't Maia's personal style, and earrings even less so. Although this illustration is so beautiful that it doesn't even matter, and the book even has a seal of approval from YA fantasy queen Tamora freaking Pierce, WHAT WHAT.

Being a master tailor is all Maia has ever wanted. But no matter how hard she works, she'll never become one for the simple fact that she's a girl. (The patriarchy is strong in A'landi, y'all.) So when her father's summoned to be a candidate for the emperor's master tailor, Maia poses as a boy to go in his stead—both because her father's in no condition to travel, and also she's not about to throw away her shot. Once Maia arrives at the palace, though, she finds herself embroiled in a cutthroat competition that'll push her beyond her limits and take her places that she never would have dreamed of.

I wasn't quite sure who'd be Maia's love interest: the charismatic emperor, his enigmatic adviser, or the haughty empress-to-be who's judging the competition? Once the one true ship emerged, it is of course an impossible romance, so I'm obviously here for it.

Lim's descriptions of this fantasy world are so vivid that I had a deep yearning to see it as she's imagined. (I'm skeptical that Hollywood could do it justice, but I'd still like to see them try.) And make no mistake—it's definitely a fantasy world, with magic becoming more prominent as the novel progresses.

You can't expect the emperor to hire a new tailor through a regular job interview, can you? Better question yet: who will be A'landi's. Next. Top. Tailor?

Admittedly, a sewing contest did initially feel less high stakes than something combat-based that we're used to seeing. But that made me think about which skills are valued and glorified in society, especially ones like sewing or cooking* that are viewed as recreational when women do it but prestigious when men do it—a subtext made text in this story. I also appreciated how Maia's something of a prodigy, instead of completely YA-ifying the situation. (Besides, we all know too well that cranky old men are just as capable of being messy benches who love drama.)

The tailors are tasked with increasingly difficult challenges, including the procurement of rare, almost mythical materials that takes Maia on a journey full of other YA tropes that I know the FYA crowd enjoys but I can't elaborate on because of spoilers.

Relationship Status: Just What I Was Looking For

Take one look through my reading history, and you can tell that this is not a book that I'd usually go for. But truthfully, my typical fare's been a little underwhelming lately, so I branched out for a change of pace. Lo and behold, I found a great match—and it even has me clamoring for another date. (Thank goodness the sequel's scheduled for next year!)

Spin the Dawn is available now.