A Story that Feels Complete 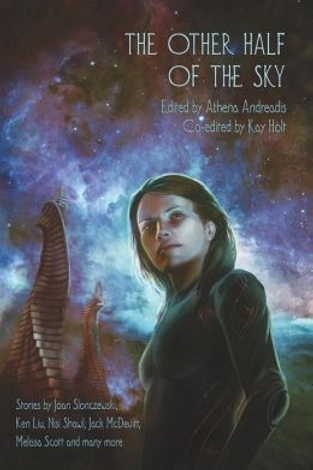 When reading short stories or novelettes, I sometimes get a lingering sense of what-else-ness, a certain ugh-this-was-not-enough-ness feeling. Sometimes though, a short story is so rounded, I get the opposite feel, a sense of completeness, of fullness, of well-this-was-perfect-ness. The Waiting Stars is one of those stories.

First published last year in The Other Half of the Sky, an anthology edited by Athena Andreadis, the novelette went on to scoop a Nebula Award this year and nominations for both the Hugo and Locus Awards. And rightfully so: It’s amazing what a good writer like Aliette de Bodard can do with the format. With just about 10,000 words, the novelette has two co-existing storylines, rounded female characters, vivid settings that go from outer space to a colonized planet and a story that is equal parts a moving tale of family and a terrifying saga of colonialism and stripped identity. There is also just enough worldbuilding here that even though the story is part of a series of stories in the author’s Xuya universe (like the excellent On a Red Station, Drifting), it can still be read as a stand-alone.

One storyline follows two cousins traveling into outer space on a dangerous mission into enemy territory to rescue one of their ancestors, a lost Mind-ship. They are part of the struggling Dai Viet Empire whose Mind-ships are controlled by family members in a symbiosis that is both beautiful and terrifying. Theirs is a mission of the heart, fuelled not only by obligation but by tradition, connection and a sense of identity, family and purpose.

In the other storyline, a character named Catherine lives on a planet colonized by the Outsiders. She is an orphan of Dai Viet origin and her color and her face are the only remnants of her identity. Everything else about her has been torn apart by a calculated colonialist upbringing that not only erased her memories but made sure that she grew up to fit in with the Outsider society and what they expect of her.

What strikes me the most about The Waiting Stars is how there is an overwhelming sense of undiluted horror that runs throughout. Catherine is clearly someone who has been stripped out of not only her identity but of choice. She lives under the constant feeling that there is something out there for her, that the stars are waiting, but her every move is controlled and she is not allowed to do anything she is not supposed to. Even the man who loves her does so from a place of creepy, harmful paternalism from which he believes whatever has been done to her is for her own good.

I won’t say how exactly the two stories relate to one another except to mention that the two storylines come together perfectly in an affecting, touching, hopeful ending.

This has my vote on the upcoming Hugo Awards.