Storytelling in the Genes 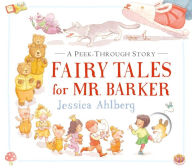 “It's probably something that I've wanted to do for a long time but shied away from because it's the family firm.” Those are the words, as quoted in this 2013 Guardian piece, of British author and illustrator Jessica Ahlberg, whose newest book for children, Fairy Tales for Mr. Barker: A Peek-Through Story, hits U.S. shelves in March.

Jessica’s parents are the award-winning children’s book creators Janet and Allan Ahlberg, who have an impressive bibliography when it comes to books for the toddler and preschool set. Janet, who collaborated with Allan on many popular titles (including The Jolly Postman and Each Peach Pear Plum), died of cancer in 1994, yet father and daughter continue the family legacy. They even collaborated on The Goldilocks Variations, released in 2012, a book described in the starred Kirkus review as an “exhilarating suite of variations on a classic.”

The Guardian piece notes the following, which made me laugh out loud:

“Jessica relates the family legend: her mum was labouring over other authors' books

and finally snapped when she was asked to draw Simon the Superior Safety Pin.

So she asked her husband, a primary school teacher, to write her a story instead.

Allan did, and they began a rich creative partnership.”

It’s clear that Jessica herself also knows that children need more compelling characters than animated diaper clasps. Her newest book, the first she’s both written and illustrated, is a cheery adventure for young children, originally released in the U.K. last year.

Jessica’s main character, Lucy, lives in a bedroom filled with toys and books. She shares a story about trolls with her dog, Mr. Barker, who then runs off, chasing a butterfly. He hops through the window, whose panes are cutouts in the page, yet he lands in Goldilock’s cottage. When Goldilocks tells Lucy that the three bears might be mad at her when they arrive home, Lucy invites Goldy to follow her. They end up in a fairy-tale pig’s house made of straw. So the adventure goes—they also run into Jack, a fee-fi-fo-fum’ing giant, and Sleeping Beauty—until all the fairy tale characters she and Mr. Barker have encountered end up in her bedroom. She even reads to them from the same book she’d been reading at the book’s opening, the story of “The Three Billy Goats Gruff.” This is good with her new fairy-tale friends, because they want no more of fairies, giants, big bad wolves, and bears. (They seem to be down with trolls.)

There was a gentle, bucolic element to Janet’s illustrations that also reside in Jessica’s art. Lucy’s world is lush, green, and thriving with life. Jessica’s palette is soft; her lines, round and warm—all things that will please the preschool crowd at which such stories are aimed. Lucy’s world, as well as the ones of the fairy tale characters she meets, is also filled with details. These are spreads children will linger over, and the page cutouts also reveal happy surprises. When Lucy first enters Goldilock’s world, the page turn prior to the bears’ cottage reveals a grand forest through the window of the bear family’s home. It’s really a poster (of a fairy-tale world, of course) hanging on the wall of Lucy’s bedroom. Jessica plays in these clever ways with the cutouts in each spread. Delightfully and absurdly, Lucy and Mr. Barker even walk right through a hole in some Swiss cheese on the giant’s table in the Jack spread. Cue the delighted squeals of preschoolers.

There’s an art to creating stories and illustrations that will capture the attention and delight of very young children, and Jessica has a real ability to do so.

She had, after all, the best possible teachers.