Stranger Things Happen at the Circus 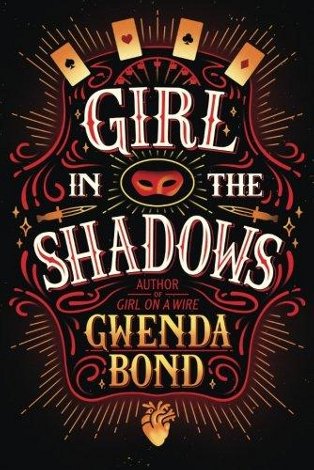 Step right up, folks, and check out the weirdest shows on Earth…all from the comfort of your favorite reading chair!

Lots of speculative fiction stories are set in circuses or carnivals. And why not?  Circuses and carnivals are some the most unusual places to visit. They've got clowns, acrobats, wild animals…and did I mention the clowns? Always with the clowns.

Here's a quick (and incomplete) rundown of speculative fiction stories set in circus and carnivals that are worth checking out. If you dare!

Girl in the Shadows by Gwenda Bond

In this companion novel to 2015's Girl on a Wire, eighteen-year-old Moira Mitchell wanted more than anything to follow in the footsteps of her father, a Las Vegas stage magician. Because her father forbids it, Moira runs away and sneaks into the Cirque American where she becomes an escape artist in training. Her hopes – that she can practice magic, thus proving to her father that she is worthy of the craft – are far exceeded when she learns that she actually knows how to wield magic for real.

In the myth-infused Menagerie, Metzger's Menagerie is a traveling carnival set in a world where the mythological creatures from stories we thought were fake are actually real. When Delilah Marlow visits the carnival, it changes her life. It's there that she discovers that her human appearance is just a thin veneer over her true self. Unfortunately for Delilah, that same discovery causes her to be stripped of her human rights and sold to the carnival. Menagerie, is about Delilah's struggle for freedom, not just for the mermaids, minotaurs, gryphons, and other fantastic creatures, but also for herself.

Stephen King, apparently discontent with making readers deathly afraid of killer clowns in It, returns to the weird and wonderful world of carnivals in Joyland. It's Summer 1973 and a small-town in North Carolina is the temporary home of an amusement park called Joyland. Devin Jones, with his newly-broken heart, gets a job there and falls for the mother of the dying boy he befriends. Before you think King has gone pure nostalgic – and to be clear, much of the book is very nostalgic – know that the carnival is haunted by the ghost of a woman who dies in the funhouse, which makes Joyland equal parts nostalgia, horror, and murder mystery.

The Night Circus by Erin Morgenstern

It's the late nineteenth century and Le Cirque des Rêves is a circus attraction that appears without warning…and only at night. If alarm bells aren't going off yet, consider that it is also the setting where two magicians become bitter and fierce rivals. Their rivalry knows no bounds; their mutual hate for each other spills over into their children…except that fates intervene and the younger magicians (eventually) fall in love with each other. However, their relationship triggers a sequence of events that spells disaster to performers and patrons alike.

Something Wicked This Way Comes by Ray Bradbury

In the Internet Article Rulebook, there is a chapter on books you must include in lists. As per the section on circus-themed books, I am legally obligated to mention Ray Bradbury's 1962 classic Something Wicked This Way Comes. And rightfully so! This is the dark fantasy book that paved the way for (and likely inspired) all the other books mentioned here. In it, two thirteen-year-old friends go through hell when they visit the travelling carnival that arrives in Green Town, Illinois near Halloween. There, Mr. Dark, the leader of Cooger & Dark's Pandemonium Shadow Show, seemingly wields great powers which he uses to fulfill the secret desires of the townspeople. In reality, he's binding them to everlasting servitude.

Right This Way, See the Egress!

Other speculative fiction books set in the circus include: