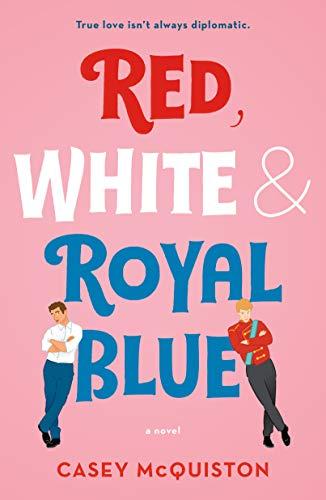 Cover Story: Be My Valentine

I like the simplicity here. Sure, they included a bit of red, white and blue to fit with the title, but this cover is screaming pink like the big ol’ Valentine that it is. Embrace the pink! It loves you! Love it back!

Alex Claremont-Diaz is the half-Mexican son of the first female POTUS. Henry, Prince of Wales is…well, the Prince of Wales. They’ve been acquaintances for years, since they met at the Rio Olympics, and Henry made it clear he wanted nothing to do with Alex. Since then, Alex has hated Henry and been forced to grin and bear it whenever the first family must interact with the British monarchy. But that all comes to a head when Alex and Henry’s animosity leads to a cake-related disaster at Prince Phillip’s wedding. It’s an international political scandal, and in order to save face, their PR teams decide that Alex and Henry will pretend to be best friends in front of the press as damage control—attend events together, do charity work together, act like they like each other.

The only problem? Maybe…they sort of already do like each other? Alex has always considered himself straight, so this is a new and unexpected conundrum for him. But he knows the way he feels about Henry is making him question everything. And when all those questions build up to a fateful evening in the Kennedy gardens, Alex and Henry find themselves caught up in something much bigger than they ever imagined on the precipice of President Claremont’s reelection bid. How can two people be together when doing so might completely upend two entire countries?

Alex and Henry are polar opposites: Alex is a bit of an asshole, but, like, in a good way? You know the type. He’s charming, hot, smart, witty, America’s most coveted bachelor and a politician in the making. Henry, meanwhile, is the ultimate sensitive and thoughtful Pisces man. Always put together, always thinking of others, quiet not because he’s above it, but because he’s taking it all in, probably overthinking everything and completely in his feelings. I loved them both equally and with my whole heart. Neither were perfect—Alex tends to push people’s limits, himself included, while Henry tends to hide behind walls when he’s feeling too much—but they were perfect complements to one another. Henry could calm Alex while Alex could pull Henry out of his shell.

But these two aren’t the only characters I’m giving BFF charms to! Alex’s sister June was fiercely loving and intuitive, and his best friend Nora was a hilarious spitfire with a computer for a brain. Henry’s best friend Pez is an eccentric billionaire philanthropist/party boy that everyone needs in their life because he’ll always make sure you have a good time no matter what you’re doing, and Henry’s sister Bea was there for him when no one else was. Together, this crew made for the ultimate #squadgoals.

Do not, I repeat DO NOT, make the same mistake I did and attempt to read this book on the treadmill. It was sexy enough to make me light-headed, and I thought I was going to faint right there in the gym. Would that be the first time a swoony book made one of us literally swoon? I wasn’t willing to find out, so I stayed off the treadmill for the remainder of this book—which turned out to be a very good decision because it just. Kept. Getting. Swoonier.

Alex and Henry’s relationship begins as a classic case of enemistry, and when said enemistry gets them in trouble, McQuiston adds in a dose of forced proximity. All my favorite tropes are present: witty banter, secret longing, affectionate insults, being trapped in small spaces together. And this all happens before Alex and Henry even give in to their feelings for one another—at which point, OMG someone bring me my smelling salts. Yes, there is lots of sex, and yes, it is [insert 15 fire emojis here], but sometimes their hottest moments were in emails admitting their feelings, or subtle smiles when they thought no one was looking. When it comes to romance, I am usually all about the build-up, but these two lovebirds managed to keep ratcheting up the swoon even after I thought they couldn’t get any swoonier.

Red, White & Royal Blue is told mostly from a close third person point of view, following Alex’s side of the story, and includes snippets of text messages, newspaper articles, tweets, podcasts, speeches, and Alex and Henry’s emails to one another. McQuiston’s writing is fresh and fun, with whip-smart dialogue and characters who can sling banter and jokes faster than your eye can move across the page. She’s often hilariously tongue-in-cheek, as well, with little jokes like this one sprinkled throughout:

“Nah, come on. I don’t think this election is gonna hinge on an email server.”

Alex arches a brow. “You sure about that?”

But it’s the emails between Alex and Henry that were my favorite part of this book. Like old fashioned love letters, email gave them the courage to be so real with one another, even when they were still a bit too scared to say the same things face-to-face. It also gave us a glimpse into Henry’s mind, a part of him that he mostly keeps hidden from the public, which was such a beautiful place to be. Reading their emails felt more swoony and intimate than reading the sex scenes. McQuiston masterfully balances the huge political and personal stakes of her characters with an optimism and effervescence that kept the book fun to read—even at a time when reading fiction about politics seems like the last thing I would ever want to do.

I’m always going to be a sucker for books about the secret lives of British monarchy kids, always. If you need something to fill the Royal We shaped hole in your heart, this will do the trick.

Alex is 21 and Henry is 23, so this is not technically a young adult book, but their respective ages meant the pressure to fulfill adult responsibilities, both to the throne and to the American political system, was a bit heavier, which added a dramatic tension that might not have been present if they were still teenagers.

Depending on your view of politics, this could be a bonus factor or an anti-bonus factor. With Alex’s mother the first female POTUS, elected in 2016 after Obama in this alternate universe, and with an upcoming election, there’s no escaping politics in this book. At times, it feels a bit like an escapist fantasy, at others, a nightmare.

Book, from page one, I knew you were the one for me. You could break me out of the slumpiest book slump, keep me up all hours of the night, make me laugh, cry, swoon. You have it all, and I want you to be mine forever—no matter the international political consequences.