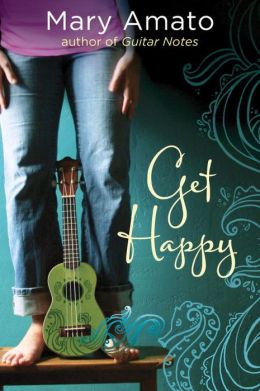 Minerva Watson's 16th birthday starts off on a low note:

It starts with the gift. Please don't judge me, but I could tell by the shape and the size of the box that it wasn't a ukulele and I felt a little piece of my soul start to drown.

Rather than the ukulele that she's been campaigning for for months, her mother gives her—a girl who loves rescuing raggedy vintage dresses from the dollar bin—an expensive-yet-hideous-and-very-much-NOT-MINERVA sweater emblazoned with gigantic snowflakes. THEN, on her way out the door to school, Minerva signs for a package from her hasn’t-bothered-to-contact-her-in-14-years father. She falls in love with his gift at first sight, but Minerva doesn't know if she can bring herself to wear it, let alone reconnect with a man who abandoned her when she was 2 years old...even though the letter enclosed with it, oddly enough, suggests that SHE'S the one who instigated the rift.

So, at first, she tries to put it out of her mind. She and her best friend Fin—along with cute boy Hayes and annoyingly perfect new girl Cassie—apply for jobs at Get Happy, a service that provides costumed entertainers for childrens' parties, and for a while, she's so distracted by regular life that she doesn't have much time to explore long-festering family wounds. But eventually, things come to a head, and it turns out that the situation is much more complicated than she'd always assumed.

In a lot of ways, Mary Amato's Get Happy reads like a pretty light, somewhat run-of-the-mill story about friendship, the beginnings of independence, and first love. While the teen characters all read quite a bit younger than 16—except for the job at Get Happy and her freedom in running around Chicago, I could have easily imagined Minerva as a 12-year-old—it's a warm, comfortable piece of contemporary fiction.

Here's what made it a standout for me:

It isn't immediately obvious—her ukulele-lust and her songwriting and her friendship with Fin screen it very well—but Minerva is an angry, angry girl. Bad, unpleasant feelings toward a deadbeat dad are entirely, easily understandable, but she goes a step farther than most heroines: She takes out her frustration, insecurity and jealousy by harassing Cassie online. Uncomfortable and unpleasant, yes, but Amato does an especially good job with it by walking a careful line: She shows Min's thought process and state of mind, but doesn't condone her actions.

Here's where it gets even more complicated: Min isn't working with accurate information about her family history. When the extent of her mother's betrayal becomes clear—not only has she been out-and-out lying to Min for years, but because of her lies, until now, Min was never ever entirely sure of her own ethnicity—it sparks a jarringly effective realization that Min's relationship with her mother, especially, might never recover. Amato deserves an especially big round of applause for leaving that aspect of the story open-ended: Min and her parents (and her new-to-her extended family) are working on healing and on forgiveness, but there's no question that it will be difficult work, and that they all have a long journey ahead.

Again, though, it doesn't read like a heavy-duty saga of pain and betrayal. There's a ton of humor in it: Joy Banks, the semi-terrifyingly peppy fake-profanity ("Son of a freaking biscuit!") slinging manager of Get Happy, is especially hilarious, as are the descriptions of Get Happy's trademark-violating costumes. Min's songs, too, are legitimately good. And finally, the appendix of songs at the end—complete with ukulele chords—was a great touch, in terms of making Min more real and in encouraging readers to pick up instruments and start making their own music.