A Study in Must-Read Authors 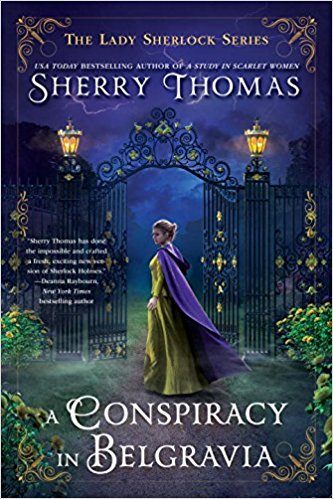 So you all are Sherry Thomas fans, right?

I sincerely hope so! She’s seriously one of the smartest writers out there, and for whatever reason, her novels hit all my romance buttons.

Last fall she released A Study in Scarlet Women, an intriguing new take on the Sherlock Holmes canon. (It got a great review and was named one of Kirkus’ best books of 2016.)

All Charlotte Holmes wants is the freedom to lead her own life, without a husband. After her father reneges on a promise to let her get an education toward her goal of being a headmistress of a girls’ school, she undertakes a plan to get herself compromised. Her expectation is that the event will remain a secret, but she’ll use it to leverage her father into keeping his word. Unfortunately a few notorious gossips get wind of her ruination, and soon it becomes a huge scandal.

Since she’s effectively barred from her professional hopes and basically ostracized from society, she turns back to some detective work she’d been doing by correspondence with an inspector. The connection is facilitated by an aristocratic friend who may be her soulmate but who married the wrong woman and—due to his sense of honor toward his wife, whom he can’t stand, and toward Charlotte, whom he’s probably in love with—won’t act on his feelings for Charlotte, even after she practically begs him to.

As she investigates a tragic death that her family is being subtly blamed for, a far more sinister situation unfolds, though Charlotte is the only one who connects the dots between a bunch of seemingly unrelated crimes and accidents. But in the end, she uncovers a disturbing secret that has touched a wide circle of families and, in exposing one man’s wicked deeds, highlights the fragility of a woman’s standing in the late 19th century.

There are so many things to love about Sherry Thomas, and about this novel.

People who don’t read romance novels—especially people who vociferously state that they would never, ever read a romance novel (can you see me rolling my eyes?)—don’t understand the powerful advocacy these titles represent.

A Study in Scarlet Women peeks behind the curtain of Victorian society and reminds us how little power women had in English society and under English law. For all the reminding Queen Victoria had to do within her own power structure that she was the most powerful woman on earth, she didn’t do much to empower the women in her kingdom. Pro-woman, always.

Charlotte is brilliant, but she’s also lucky. Even after she’s ruined, she has influential friends who keep an eye out for her when she flees her father’s home. She befriends a woman who provides shelter and companionship—and helps her find a way to produce an income. She has the brains and connections to create a career on her uncanny ability to solve crimes a la Sherlock Holmes, and the smarts to market herself as a man—since she knows most people would never credit a woman with the same intelligence and skill.

The book is not a romance, though it’s clear that the romantic and sexual tension that exists between Charlotte and her would-be lover (if he’d only give them the chance!) will be explored in subsequent books. But I love that Thomas has created a character who continually confronts the strictures and double-standards that women are always up against—and wins.

Thomas is a must-read author for me, and I’m only sorry it took my library so long to acquire the title in audio. If you’re as huge a fan of hers as I am, you’ve probably read this book already, but if not, I highly recommend it.

Can’t wait to see what she has coming up next. Book two in this series, A Conspiracy in Belgravia, is set to release in September (yay!), but I’ve also heard she’s contributing to a romance anthology too. (Double yay!)

And speaking of must-read authors - I’ve been re-listening to some Susan Elizabeth Phillips titles. Apparently it’s time to revisit Teddy, since, while it’s rare to find SEP titles available to borrow right away, both Fancy Pants and Call Me Irresistible were!

I’m right in the middle of The Great Escape, which I’m enjoying too, and it occurred to me that the first major interview I ever did was with SEP, not quite five years ago.

So who are your must-read authors?