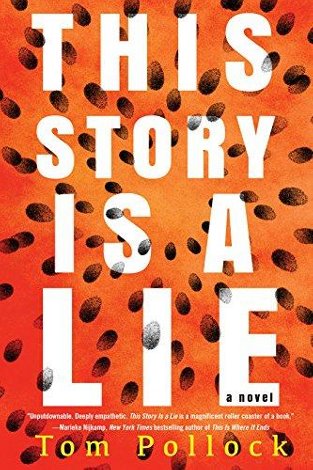 Summer reading is here (well at least in the Northern hemisphere, of course) and I have three wonderful recommendations: a mind-bending YA thriller, a lovely romantic Fantasy and a post-apocalyptic YA.

This Story Is a Lie by Tom Pollock is out in a couple of weeks from Soho Teen and is a complex, mind-messing thriller about a math prodigy teen boy named Peter Blankman who suffers extreme anxiety disorder and is prone to panic attacks. He is able to get through with the love and support of his twin sister Bel and the constant monitoring from his scientist mom. But one day, his mother gets gored in an attack as she is getting ready to present some very interesting scientist findings AND his sister goes missing. Alone and in fear for his own life, Peter needs to navigate a scary world mostly by himself and to get to the bottom of the mysteries surrounding his family.

As the story progresses, we realise that things are not quite as they seem and Peter’s narrative is not entirely reliable – as the secrets unfold and the tension ramps up, the novel becomes more and more engaging and unputdownable all the way till its very mind-blowing conclusion. This is also a book that features a main character with severe anxiety, which is done with a lot of care and respect. I inhaled this book pretty much in one sitting.

Witchmark by C.L. Polk is a novella, taking place in an alternate world reminiscent of Edwardian England and featuring fantastic worldbuilding, mages, fae and happy gays. Miles is a war veteran with PTSD who works as a doctor under an assumed name. His life is more or less in limbo since by the nature of his innate magic powers he is supposed to have been working as an enslaved conduit to his sister’s stronger power. Trying to escape that destiny and the Powers That Be is futile, though, as it just so happens, and his family finds him again when a new patient exposes his healing gift. The patient dies – poisoned – and he has to investigate that murder with the help of Tristan, the gorgeous, aloof, super powerful immortal being who crossed over to Miles’ world to investigate the troubling disappearance of souls.

What follows is an adventure-murder-mystery-romance with a story that also somehow manages to be about toppling an increasingly unfair world order that relies on structural abuse. This complex, lovely, romantic novella is out now.

Finally, my third recommendation for today is actually a twofer. A few years ago, a YA novel called Archivist Wasp by Nicole Kornher-Stace landed in the world. It was unlike anything else published at the time, about a horrible post-apocalyptic world in which a ghost-catcher named Wasp spends her time trying to remain Archivist (every year she has to beat to death some contenders OR DIE) and trying to catch ghosts to interrogate them about the past in order to find out what happened to the world.

But most ghosts don’t retain memories. Until one day, the ghost of a super-soldier comes to her for help. And he remembers more than he should. The two travel to the underworld at GREAT PERIL and become BFFs in the process. The answers and the revelations are mind-blowing to Wasp who then comes back to change her own world. Archivist Wasp was awesome and I didn’t know there was going to be a sequel. But here we are three years later blessed with Latchkey, which somehow managed to be as great as its predecessor, still featuring Wasp and her BFF ghost having adventures together and trying to figure out the past AND saving other ghosts AND the world.