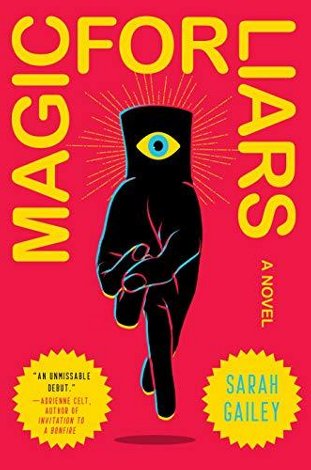 We are already well into Q2 of 2019 so it’s time for another list of anticipated reads – SUMMER EDITION!

I don’t know how this happened (mysteries of publishing) but at least four of my highly anticipated books of the year come out on the SAME DAY.

Unravelling by Karen Lord—I’ve been eagerly anticipating a new Karen Lord novel for a while now and am super excited to see her going back to a novel steeped in Caribbean storytelling (her first novel, Redemption in Indigo, is SO good). It’s also a murder mystery involving Dr. Miranda Ecouvo, a forensic therapist and possibly a Trickster god?

Magic For Liars by Sarah Gailey—this is somehow ALSO a murder mystery?! About two sisters, one of them a PI who never wanted be magic and the other who is a magically gifted professor. Someone dies, sisters have to deal with it—and it’s Sarah Gailey, so it’s bound to be awesome.

Leaving the 4th of June behind, we have The Affair of the Mysterious Letter by Alexis Hall on June 18. A new genderbent take on Sherlock Holmes that is described as witty, charming and weird and which features: alternate universes (!), vampires (?!), pirates (!!), a SHARK (!!!), and more (!!!!).

Also on June 18, The Lesson by Cadwell Turnbull is breaking ground as one of the first Sci Fi novels set in the Virgin Islands and exploring the impact of colonialism. A race of super-advanced aliens on a mysterious research mission showed up five years ago and there is a precarious relationship between benevolence and violence in their relationship with the humans of the Virgin Islands.

On July 9, we have Spin the Dawn by Elizabeth Lim has been pitched as “Project Runway meets Mulan” with a cross dressing heroine competing to become the imperial tailor who then has to sew three magical dresses to win the competition—except she somehow needs to use the sun, the moon and the stars to do them. There is also a Lord Enchanter and romance and for some reason I am also getting Howl’s Moving Castle vibes from this one. I shall report back ASAP.

Finally, Gods of Jade and Shadow by Silvia Moreno-Garcia is out on August 6 and it’s a dark fairy tale set in the Jazz age in Mexico and inspired by Maya mythology. A young woman who dreams of a better life accidentally frees the spirit of the Maya God of Death who makes her an offer she can’t refuse. The two then embark on cross-country journey so she can win him back his throne. Easy peasy.