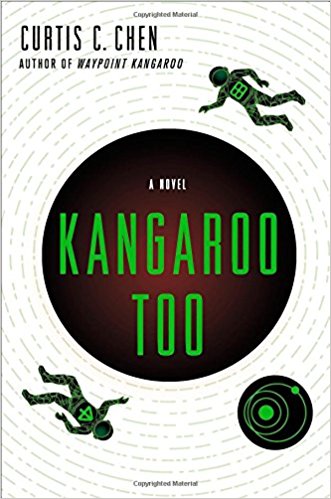 It's hard to keep up with the hundreds of new speculative fiction books being released each month, so there's a decent chance that you may have missed the release of a sequel in a series you've already started. Here's a roundup of some worthwhile sequels that recently hit the bookstore shelves. These books easily work as standalone stories, but if you're not reading these series, then consider this a reason to check them out.

Devil's Due by Taylor Anderson

SERIES: Destroyermen – an alternate military history series that began in 2008 with Into the Storm – which traces the ongoing confrontation between the crews of the destroyer USS Walker and the Japanese battlecruiser Amagi, after they are transported from World War II to an alternate Earth and land in the center of a war between the two predominant races that have evolved there: the peaceful, lemur-like Lemurians and the ravenous, velociraptor-like Grik.

WHAT IT'S ABOUT: Captain Matt Reddy and the crew of the USS Walker (who have formed an alliance with the Lemurians) must face General Kurokawa, a madman from Reddy's past who, along with more ships, has also been transported through the squall to the alternate world. Worse, Kurokawa holds Reddy's family hostage. But that's not all: the mysterious League and evil Dominion are plotting schemes of their own and the vicious Grik are increasing their numbers to become an even greater threat. Can Reddy remain objective and focus on winning the war when his family is in danger?

The Black Elfstone by Terry Brooks

SERIES: Shannara, started in 1977 with The Sword of Shannara and currently comprised of multiple sub-cycles and 29 novels (plus a graphic novel and short stories). The Black Elfstone is the beginning of a new 4-part cycle called The Fall of Shannara.

WHAT IT'S ABOUT: After generations of peace, an unknown enemy is preparing to threaten the Four Lands and they wield a brand-new breed of dangerous magic. The High Druid, fearing that the invading army will succeed, sends a diplomatic party to investigate and with them sends Dar Leah, the order's sworn guardian. Meanwhile, the onetime High Druid Drisker Arc, now living in exile far from the political struggles of his former life, becomes the target of assassins and he aims to find out why and who sent them. With him is Tarsha Kaynin, a young woman gifted with the wishsong who is searching for her wayward brother.  As the quests of Dar Leah, Drisker Arc, and Tarsha Kaynin converge, the future of the Four Lands will depend upon their success.

Kangaroo Too by Curtis C. Chen

SERIES: The Kangaroo Series, a fun spy-fi series that began with Waypoint Kangaroo, which introduced an unorthodox spy named Kangaroo who wields a "pocket" allowing him to store things in another dimension. Kangaroo Too is the second book in the series.

WHAT IT'S ABOUT: Never one to be accused of possessing luck, secret agent Kangaroo's spacecraft is wrecked by a rogue mining robot as he is on the way to his latest spy mission. The robot is linked to the Moon, where a retired asteroid miner named Clementine could hold the key to the source of the sabotage. However, Clementine will only deal with Kangaroo's personal physician Jessica Chu. Kangaroo, acting as a courier, accompanies Jessica to the Moon while he smuggles Clementine’s payment in his secret pocket universe that only he can use. But upon arrival, Jessica is arrested for the murder of a local worker. It's up to Kangaroo to clear Jessica's name, get the information out of Clementine, and find the source of the evildoers' nefarious scheme.

Down Among the Sticks and Bones by Seanan McGuire

SERIES: The Wayward Children series – currently comprised of Every Heart a Doorway and now Down Among the Sticks and Bones – is a portal fantasy centered around Eleanor West's Home for Wayward Children, a place for children who returned from faraway lands and are trying to get back there.

WHAT IT'S ABOUT: Jack and Jill are twin sisters. Jacqueline was considered her mother's perfect daughter: she was polite, quiet and dressed like a princess. Jillian was her father's perfect daughter: an adventurous, thrill-seeking tom-boy. When they return from their grand adventure at age seventeen and find a home at Eleanor West's Home for Wayward Children, they tell the story of what happened to them when they were just twelve years old: when they walked down an impossible staircase and encountered magic in a land filled with danger.

All Good Things by Emma Newman

SERIES: Split Worlds, an urban fantasy series (with a dash of noir, fantastical magic, and evil faeries thrown in for good measure) that began with Between Two Thorns.  All Good Things is the fifth book in the series.

WHAT IT'S ABOUT: What lies between the two worlds in question – Mundanus, the world of humans, and Exilium, the world of the Fae – is the world of the Nether, a mirror-world which maintains a social structure of 19th-century England and is preserved by Fae-touched families who remain loyal to their ageless masters. Catherine Rhoeas-Papaver was born in the Nether, but escaped to Mundanus to live out an ordinary life…at least until she is pulled back to face an arranged marriage. Then there's Max, who polices the boundaries between the worlds while keeping innocent trespassers safe from the Fae. Max, tasked with solving a high-profile disappearance within the Nether, enlists Cathy's to help, but finds that dealing with the Fae may prove too dangerous.