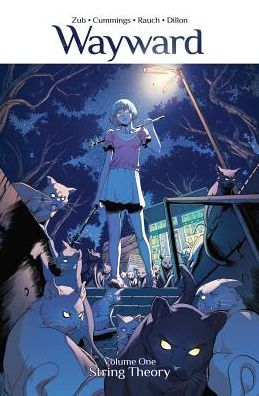 Mom was supposed to be at the airport, but the flight was delayed so she had to go to work. It sounds like she’s got crazy hours just to make ends meet.

Bus to the plane. Plane to the train. Train to the subway. Each route has its own pattern. I just have to connect the dots.

No problem. I’m good at that.

My name’s Rori Lane. And this right here is my brand new life.

Superheroes are kind of a thing lately. From the newest Avengers flick, to Netflix’s Daredevil, to the countless other Marvel and DC properties across all media outlets, you could say that the superhero truly captures the zeitgeist of this particular day and age.

Not all superheroes, however, are the same. Sometimes you get Norse gods, eccentric genius billionaires, and superserum-enhanced soldiers. Other times, you end up with teenagers who can weave great patterns and draw words of power, eat spirits for energy and strength, transform into a clowder of cats, and manipulate psionic energy.

Meet the cast of Wayward: String Theory by Jim Zub, with art by Steven Cummings.

Rori Lane is a teenager going through a tough time—her parents have just gone through a divorce with her Irish father choosing to stay in Ireland, and her Japanese mother choosing to return to Tokyo. After trying to live a disastrous year alone with her father, Rori is sent to join her mother in Japa, and though she speaks Japanese (taught by her mom), Rori is very much an outsider and a stranger in her mother’s homeland. Things get even stranger when Rori discovers that she can see threads of power—patterns of fate that she can follow to find certain things. These lines of power lead her to others like her: a wisecraking girl named Akane, who can change form from cat(s) to human, a misunderstood and quick to anger youth named Shirai who must eat ghosts to survive, and a quiet homeless young man with oversized glasses and some kind of telekinesis.

They also lead her to yōkai—turtle-men and filth-lickers and foxes, who work for a creepy dude in a dapper seersucker suit (complete with bowtie, suspenders, and skimmer hat)—and soon Rori and her friends are in great danger. They don’t know what is brewing, but they know that something big is happening—and they might be the only ones who can stop it.

I wasn’t quite sure what to expect when I picked up Wayward. I’ve read a few reviews that call the book “Buffy in Japan” (interesting but scarily appropriative-sounding) and “the next Saga” (woah, big words!). And while there are facets of Wayward that make sense with these comparisons...they aren’t quite right. Because Wayward is something entirely unique and brilliant and awesome, completely on its own. This is a graphic novel with a sympathetic and compelling heroine, a stunning attention to language, architectural and cultural detail, and a creative, non-appropriative nor exoticizing interpretation of Japanese mythology in the superhero tradition.

In other words: Wayward is full-on awesome.

Zub and Cummings make a formidable team in this first book, balancing artistic interpretation (and some really, awesomely vibrant colors) to just enough script and dialogue to bring Rori’s Tokyo to life. I love the attention to detail and the attempt to capture Tokyo in a way that feels incredibly genuine—not the media-familiar images of bustling people and shining compact buildings, but the residential environs, the crisscrossing of power lines above, the areas of forgotten urban decay. Beyond the physical imagery, Zub does a brilliant job of conveying the differences in culture and language. In particular, Wayward pays close attention to the culture shock that Rori experiences at school: other students are shown laughing in the background and calling her “Loli?”; her problems adjusting with her headmaster; her frustration because people talk too fast and she doesn’t know nearly as many kanji as her peers. The way that language is integrated into the text is similarly seamless—there’s no italicizing, no romanji representations of Japanese phrases.

Most importantly, Zub and Cummings (who lives in Yokohama) are very careful NOT to exoticize or appropriate Japan and Japanese folklore. The foreword by Zack Davisson (a translator, writer, and scholar of Japanese folklore and manga, speaks about this in awesome, wonderful length—the tendency for comic books and other media to “treat Japan as if it were a fictitious fantasyland, with all the reality of one of the kingdoms of Westeros”).

The characters are probably the least developed aspect of the entire book. Readers get to know and understand Rori quite well—her feelings of isolation and her desire not to get in the way, her insecurities to the point of self-harm, her frustration with her parents’ divorce. And yet, I wish we could have had more development and insight into her relationship with her harried mother, and her mother’s dramatic secret. Similarly, Rori’s team is varied in terms of depth: Akane, the cat transformer, is gleefully strange and fiercely loyal to Rori even though they’ve just met, and she’s easily my favorite character of the bunch (she has the best trash talk during fights). In comparison, Shirai the “ghostbiter” and Nikaido the “trapper” are lesser known quantities. We see glimpses of their personalities—Shirai: quick to anger; Nikaido: quiet—but know little else. There’s plenty of room for further exploration in future Wayward volumes.

A final note: at the end of this graphic novel, there are some very cool character sketches of Rori and her friends with notes and questions scribbled on the page—plus there are separate files on each of the yōkai (spirits, ghosts) in the comic. Including an explanation of their mythological origins, their appearance and abilities, each of these yōkai files are insightful, fascinating, and in the case of the akaname (or filth-licker), disgusting.

Overall? Wayward is not to be missed. If you like kids with superpowers banding together to fight spirits and the nefarious forces that govern them, if you like gorgeously drawn comics with vibrant color, if you like non-appropriative portrayals of Japanese culture and mythology, if you like thoughtful and insightful treatment of a bi-racial heroine trying to make sense of her new world…Wayward is for you.

In Book Smugglerish, 8 transformative spirit cats out of 10.