A Superpowered Lovecraft-ian Tale of Destruction 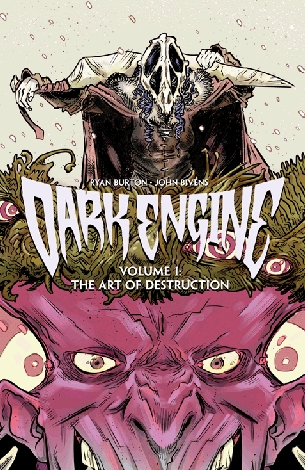 At a recent convention in Chicago—Capricon 35—I met an artist named John Bivens. Bivens turned out to be an interesting and talented guy. His art was on display in the art show, along with pages from various comics and copies of a graphic novel he’d drawn. The cover displayed a character with a bone helmet resting a massive sword across her shoulders. I snagged a copy. Who wouldn’t?

Flipping through the pages of Dark Engine Volume 1: The Art of Destruction, I quickly became engrossed by the story and the art. I’m still trying to decide if it’s science fiction, sword and sorcery, or some hybrid combination of the two, with horror thrown in for good measure.

We have multiple settings here. First is a future where humans (I think they’re humans) live inside The Alchemist’s Tower which sits on the edge of Sporeland, a dangerous, desolate place where Sporedevils thrive. The Sporedevils are similar to the face-huggers from Aliens. They attach themselves to a human’s face, wrap their tail around their neck, lock mouths and inject spores into the waiting host. One infected human can spread those spores to others, and so on. So the denizens of the Tower created Sym, and the Dark Engine, and sent her back in time on a mission to kill the enemy and change the world for the better.

In the past, Sym bounces from one point in time to another. A killing machine, she battles almost mindlessly, reacting on instinct alone. In the time of the dinosaurs, she forges a sword from the bone of a T-Rex. In ancient Egypt, she is mistaken to be Ammut, the soul-eater, and is worshipped by the locals who make offerings in exchange for favors for their dead family members. In a Scandinavian-esque land, she battles Vikings.

The story, written by Ryan Burton, weaves a decent tale, threading history with magic and mystery. The past and the future are very different. The future is dark and populated with people who are clearly afraid of what waits for them outside their tower. They appear beaten down, unsure that what they are doing will even work. The past gives us glimpses of eras familiar and different all at the same time.

In the art, Bivens uses color and shadow to visually delineate the different eras. The future is dark and muted. You get a sense of how heavy and oppressive the future is through the use of dark colors and stormy skies. In the past, the splashes of color are visceral, a lot of shades of red, yellows, and greens—though still muted, they stand out against the darker toned pages. There is a lot of detail throughout, some of it wonderful, some a bit distracting.

One thing I noticed is that Sym is the only female character for the majority of the book, which seems strange to me. I think all those in the Alchemists Tower are male. Every human that Sym fights or kills is male. I’m not sure if this is on purpose and will be revealed as somehow important in a later volume, or what. In the Egyptian-set portion of the book, there were other female characters, but it was odd enough to stand out to me.

Overall, the book feels like the beginning of a massive story, as if the artist and writer are building the world and setting the stage for something epic. I’m fine with that. There is enough in this first volume to grab your attention and hold it until the next volume is released.

I’ll warn you, it’s probably not a book for the younger readers in your house. There’s a lot of violence and gore. Might be a judgment call on your part. But if you’re a fan of Conan and Red Sonja and wish they’d appear in a Lovecraftian tale, this is probably the book for you.