Tell Me Your Troubles and Doubts 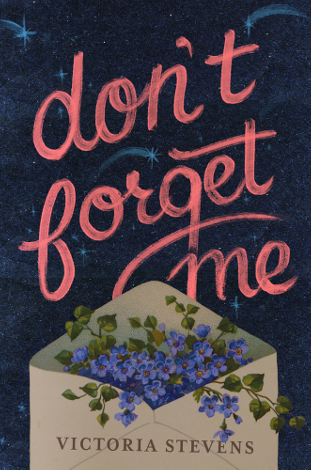 BOOK REPORT for Don’t Forget Me by Victoria Stevens

This is how we do it, y’all! I love the gorgeous forget-me-nots spilling out of the envelope, which plays in so nicely with the letters that Hazel writes her mother between chapters. And the pop of coral pink used for the title treatment is bright without being garish.

When Hazel’s mother becomes too sick to care for her, Hazel is ripped from her life in England and sent to live with a father she’s never met in Australia. Upon arrival, she meets the boy-next-door, Red, who becomes a fast friend, bringing her into the fold and introducing her to his friends, Hunter and Maddie, and his elusive twin brother, Luca. Hazel’s time in Australia is supposed to be temporary, but as her friendships grow and she finds herself possibly falling in love, she begins to question where she really and truly belongs.

Don’t Forget Me is written in the third person, and occasionally, the narration slips away from Hazel to other characters. This writing style actually made it a little difficult to feel like I was truly getting to know Hazel the way I get to know other YA protagonists. On top of that, Stevens withholds parts of Hazel’s story from the reader. We know that something is up with Hazel’s mom, but Stevens waits to show the reader those cards until the end of the story. The result is a main character I don’t feel super familiar with, going through a huge life change for a reason I don’t understand. Without knowing Hazel OR her motives, I never felt very close to her.

Though Hazel and Luca start off on a bad foot, they eventually grow closer when Hazel agrees to help him get back to his old track running times. He’s a bit aloof at first, which makes it that much more exciting when he begins to open up to Hazel and show her the broken bits of himself. They bond over a shared trauma, and their relationship is a slow build, but I never felt any real fire, and the romance was fairly predictable.

Talky Talk: The Omniscient YA Unicorn

It’s so rare to read a contemporary YA novel that’s written with a third-person omniscient narrator. Stevens dips into each of her main characters’ minds, giving us a handful of different perspectives throughout the course of the story. It was almost jarring at times to go from Hazel’s thoughts and feelings, to Red’s, and even Luca’s in one chapter. What started out as Hazel’s story quickly morphed into a story about a group of people. The prose itself was lovely, and Don’t Forget Me felt like a quick read, despite the lack of a clearly stated goal for these characters. Stevens allows the story to happen to her characters, rather than infusing a lot of action into the plot, which might not be super engaging for some readers.

Living on the beach? Snorkeling in the Great Barrier Reef? I mean, if you’re going to be shipped off to live with a father you’ve never met, there are worse places you could be shipped!

Relationship Status: I’ll Be Alone, Dancing, You Know It Baby

Book, you were perfectly lovely, and I know you’ll make the right dancing partner for lots of people. But at the end of the day, you and I were not soul mates, so we’ll part ways like five kids leaving Saturday detention, and I’ll dance the next one alone.