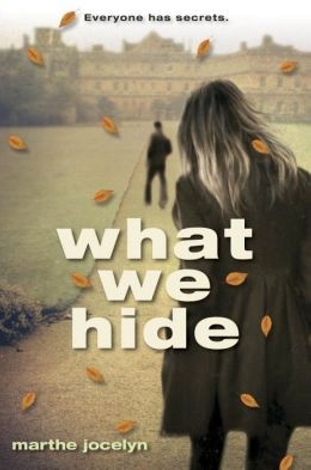 “I think about this all the time,” said Nico. “Like, for instance, who is telling this story?”

“This one!” said Nico. “The story of the English lesson on Friday morning in a shabby ex-stable that hasn’t had the windows washed in a hundred years. We have”—he looked around—"sixteen stories in here, right? And all of them are true, right? According to the”—he twitched his fingers to show that he was quoting—"narrators. But all of them are unreliable, if you’re one of the other fifteen people. So how can it be some literary genre, the unreliable narrator? There isn’t anything else.”

What We Hide, by Marthe Jocelyn

Nico has a point, right? Every story is filtered through the perception of the narrator, and regardless of how reliable the narrator seems, that filter has a crucial effect on our understanding of said story. Who’s the most reliable narrator you can think of? For me, it’s Death. I mean, with a perspective like that, you’d think that you’d get All-Knowing Truth All The Time. Every book I’ve read that portrays Death as a character or narrator, though—Neil Gaiman’s Sandman, Markus Zusak’s The Book Thief, Piers Anthony’s On a Pale Horse, and Sir Terry Pratchett’s Discworld books*—imagines Death as someone with a strong personality. Strong personalities add more obvious color to a storyteller’s voice than any other factor I can think of, and storytellers with colorful voices add a whole lot of themselves to their stories. Criminy, you can’t even always trust Star Trek’s Data to tell the entire truth all of the time, and he’s an android!

Anyway, enough pontificating from me, right? On to the actual book! Clearly, Marthe Jocelyn’s What We Hide succeeded in at least getting THIS reader thinking about truth; about secrets; about lies of malice and lies of boredom, about lies of omission and lies of desperation, about lies to loved ones and lies to ourselves; about perspective and worldview and, yes, the reliability of any given narrator.

Despite some wobbles in the first segment—at first, the dialogue doesn’t feel right for the era, and beyond some plotting that relies on avoiding the draft, there’s not much atmosphere-wise to suggest the ’70s, either—but once our full cast of characters is fully ensconced at Illington Hall, Jocelyn hits her stride. Overall, it succeeds in almost every way. Each narrator has a distinct voice—some speak in the first person, others are followed by a third person camera; some in the present tense, some in the past; one through letters and another through screenplays—and their voices and perspectives are affected by their cultural background and their economic class, by their sexual orientation, their families, their nationalities and, yes, by the secrets that they’re keeping. My only real complaint is that the class discussions that hit on the themes of the book—including the one I quoted above—were a little TOO on point: rather than leading me in a direction and trusting me to make the connections on my own, Jocelyn spelled it all out and surrounded it with flashing neon lights. And that always grates.

Back to the pluses, though. The plotting itself is refreshingly High Drama-Free: There is no huge conspiracy to be unraveled, no life-threatening mystery to solve, no obsessive revenge to be had. It’s a book about a group of “regular” people who are focused on muddling through life, not on changing the world: They all have things to overcome, and struggles to be had, but there are no secret Captain Americas here, no Mockingjays, and no Frankie Landau-Bankses. It won’t be for everyone—some readers will undoubtedly peg it as “boring”—but for me, it was an engrossing, emotionally and intellectually satisfying read.

Bonus points! Those of you who roll your eyes at the super-romanticized portrayal of the teenage boy in books like Eleanor and Park will be happy to know that in What We Hide, the boys are all in a constant state of utter horniness. Which makes for good times, reading-wise: some hilarious, some embarrassing, some steamy, some depressing, all real. Because even if every narrator is unreliable, and even though every novel is a fiction, that doesn’t mean that they aren’t speaking truth.

*Are there other Death stories I should know?