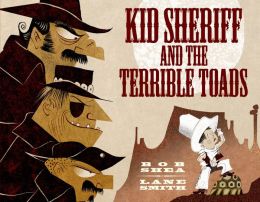 It’s a good thing when Bob Shea and Lane Smith collaborate. The last time they did so was in 2008 with Big Plans, which Bob wrote and Lane illustrated. They also created a blog called Curious Pages (“recommended inappropriate books for kids”), which celebrates subversive picture books and which I love with an undying devotion. It’s rarely updated, which is fine—hey, I’m sure they’re busy guys—and I just keep crossing fingers that it never goes away. And if it ever does? La la la, I’ll have my fingers in my ears and will pretend that didn’t actually happen.

Where was I? Oh. Why is it good when they collaborate? Because they are, hands down, two of the funniest people making picture books today. Clever and quick-witted and funny as hell (except when they’re being poignant, which they’re also capable of doing without being saccharine about it), their books are not the typical picture books you see in the children’s lit market. Thank goodness they make picture books and didn’t turn their attention to, say, welding. (This is not to disparage their welding skills. For all I know, one or both of them are welding ninjas.)

This new collaboration, Kid Sheriff and the Terrible Toads (once again written by Bob and illustrated by Lane), coming to shelves in early October, is funny and, I might add, makes a fabulous read-aloud AND would make a spectacular reader’s theatre piece AND would be a hoot to adapt to the stage. And that’s because it’s a Wild West tale written in a very particular, over-the-top drawl. The dialogue is spot-on.

I already mentioned it’s super funny, didn’t I? You see, the conundrum I face in writing about this is that it’s never, ever good to analyze humor. Well, I suppose it is if you’re…umm….a humor analyst and it’s necessary that you do so for your paycheck? But if you’re talking about comedy in any form or fashion—even picture books—and you start to dissect the jokes, things just get painful and UN-funny.

So, all I will say is this: Both Bob and Lane have excellent comic timing. And timing is everything. Or nearly everything. There  are also comedy elements such as hyperbole, slapstick, irony, puns, etc. Oops. I’M ANALYZING. Back to what I was saying: Timing is 99% of it (arguably).

Case in point: The setting in Kid Sheriff is Drywater Gulch, and the town has a toad problem. Not the “hop-down-your-britches kind of toad” but the “never-say-thank-you outlaw kind of toad.” Yep, the Toad brothers steal gold, kiss cattle and insult the town’s chili. Poor Mayor McMuffin has nearly given up. But then “hope rode into town. Slowly. On a tortoise.” Here we see Kid Sheriff on a tortoise with a determined look on this face. (The kid, not the tortoise. The tortoise looks like he’d rather be napping.) That “Slowly. On a tortoise” bit is funny, but on the next spread after our page turn, we see that he’s made little progress on the back of this weary tortoise with a text that says “Give him a minute.”

And the jokes just keep coming. Kid Sheriff’s introduction to Mayor McMuffin is comedy gold (bad pun intended), which you just have to read for yourself. And the entire plot is an ode to reverse psychology, since Kid Sheriff’s plan is to convince the town and the outlaws themselves that it’s actually dinosaurs wreaking havoc and breaking the law all over town. The outlaws get so angry that they’re not receiving the credit they deserve for their antics—the weirdest of all the Toads adding, “Cattle kissin’ is downright disgustin’. I want what’s comin’ to me”—that they storm their way into the jail, screaming about how Kid Sheriff can “just blow them dinersores” out his nose. Take THAT, they declare. (This is followed by a very funny and understated “Dang it!” when they realize that Kid Sheriff has hoodwinked them.)

Lane’s textured illustrations, rendered in a limited palette of rust colors (browns, oranges, dark reds), are sleek, playful, and perfectly suited to this larger-than-life cowboy’s tale. Children will enjoy spotting the hidden dinosaur shapes on several spreads. (Look closely: That stagecoach isn’t too far from a dinosaur in appearance.)