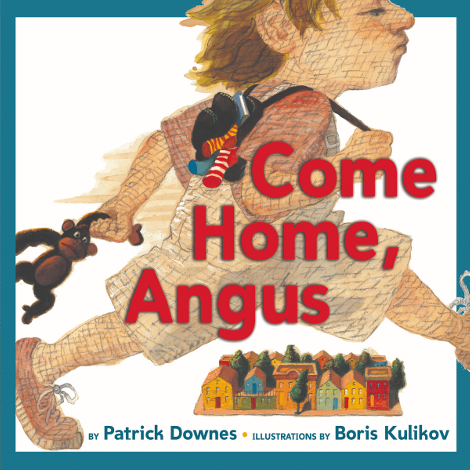 Back in 2009, Daniel Zalewski wrote in the New Yorker about the anxious, helicopter parents of contemporary children’s literature and their demanding, unruly children:

“Like the novel or the sitcom, the picture book records shifts in domestic life …. [T]he stern disciplinarians of the past—in Robert McCloskey books, parents instruct children not to cry—have largely vanished. … The typical adult in a contemporary picture book is harried and befuddled, scurrying to fulfill a child’s wishes and then hesitantly drawing the line. And the default temperament of the child is bratty….”

Though he wrote that nearly a decade ago, I don’t think that, on the whole, children’s books (or television commercials) have changed much in this regard. Child protagonists are still exerting their independence and testing their limits, and their parents are still largely beleaguered and beset by fatigue. Come July, pick up a copy of Ian Lendler’s Saturday, illustrated by Serge Bloch, to see but one example.

It’s okay if we see less of mothers like Max’s, who sends him to his room for talking back to him (pre-rumpus). There’s a place for books like this. The very point of David Shannon’s classic No, David! is that, no matter his turbulent behavior, David’s mother will be there to give him comfort, attention, and affection. At the end of Saturday, the family piles on the couch for a sort of group hug. Even Max’s dinner was there, “still hot,” upon his return. Clearly, his mama had a change of heart while he was off cavorting with wild things. Unconditional love for the win.

But Zalewski was correct in noting that picture books reflect domestic trends, and I do wonder if parallel to a recent shift in attitudes on hyper-attentive parenting is a change in the way parents are depicted in picture books. More and more, I read about our culture at large questioning so-called helicopter parenting and whether or not we’re raising a generation of insufferably entitled children. We see articles like this all the time.

One example of this reflected in a new picture book is Come Home, Angus, the debut picture book from young adult novelist Patrick Downes, illustrated by Boris Kulikov. In this story, a boy (aptly named Angus) wakes up irritable and angry. “He didn’t know why,” Downes writes, “he just did.” And that’s that. There’s no more commentary on why Angus wakes up on the wrong side of the bed. It’s simply not necessary. Anyone who has awoken grumpy (and who hasn’t?) knows that we often don’t have valid reasons for doing so. We just do. And looking-closely is the name of the game with this picture book. Observant readers will see here that Kulikov has painted everything in the boy’s room, save him and his bed, upside down. Anger will do that to your world, metaphorically-speaking.

The boy’s mood does not improve. He fusses at his dog for walking too slowly; he tells his pet canary that her singing is too loud; and he orders his poor cat to stop purring. His mother—and here’s where we see a remarkable shift from what we’re used to seeing in picture books of late—tells him his behavior is unacceptable and that he’ll “have to apologize.” Furthermore, when he yells at her that he’s mad and doesn’t have to be nice, she says to him in a seamless way that even manages to steer the book away from any sort of didacticism, “In this house, being angry doesn’t let you be rude.”

Angus’ solution is to run away. And he’s as intent as Trump’s barber. He promptly packs just what he needs and heads out, his mother asking incredulously if he’s really leaving. He answers yes, and she says: “I’ll miss you.”

But remember that unconditional-love part of parenting? Downes knows better than to send the boy on his way on his own. Look closely again: As he tromps out of his neighborhood and into the big city—Kulikov, up until now, has painted the boy larger than his surroundings, but as he gets further from home and his fear grows, he shrinks to normal size—you will see that his mother (and all three pets!) is consistently a few yards behind. Always there, always protecting. You won’t see it on some spreads if you’re in a hurry (you might just see her legs behind a tree or spot her shoes in a crowd), but she’s definitely there – to make sure he’s safe.

And, in the end, when he’s alone and frightened on a park bench, with strangers all around, she is there—with the pet cat, dog, and canary, no less—to give him that hug (and a sardine sandwich). What’s striking, though, is that that hug didn’t come without that previous reprimand about common courtesy.

Kulikov’s mixed-media art (acrylics, pencil, ink, and oils) plays with size and perspective in smart ways—he matches the boy’s over-the-top mood with equally over-the-top scale—and he paints the boy himself with what can best be described as large crosshatching on his skin and clothing. It’s as if he is about to crack from the anger welling inside. Interestingly, he gets paler and paler as his frustration grows, while the colors of the world around him grow more intense. As his anger fades and his apprehension increases when he’s on his own (or so he thinks) in the big city, he not only shrinks in size, but his regularly-saturated colors also return. The book’s copyright page notes: “On some of the paintings, to increase the color intensity, Boris uses a black tea wash.” (I’m not an artist, but my inquiring mind wants another artist to come tell me what that means!)

This one hits shelves in late July. Come for the story of the boy who begins his day up in arms and ends it in his mama’s. Stay for the marvelous illustrations – and the refreshing common-sense parenting.