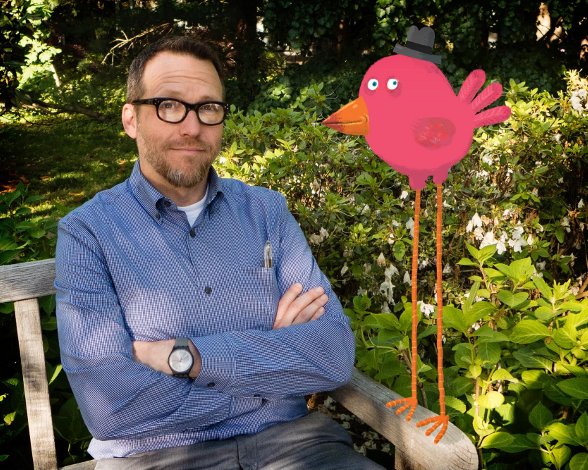 Big. Bright. Friendly. A crowd pleaser. These are just some of the words the Kirkus review uses to describe Brian Biggs’ Tinyville Town Gets to Work!, the picture book launch of his new Tinyville Town series. Fans of his Everything Goes series know what’s in store when Biggs is behind books for preschool-aged children – engaging text and art that informs and entertains and never once talks down to readers.

I chatted with Brian via email about what’s next for readers of this series; how it came about; and how, for him, it’s a no-brainer to buck traditional gender norms in books for children.

September 6 was the publication date, book birthday, and the day Tinyville Town was founded. But I should clarify that, while September 6 was the date the series was introduced to the universe, it was in fact only the first three books of what will be at least eight—and, hopefully, many more—Tinyville Town books. The fourth book, I’m a Librarian, will be out March 7. And then two more in the fall of 2017.

How’s it been going?

I think you mentioned at your site that the idea for this series came from your agent, Steven Malk. Can you talk more about its origin?

A few years back, after I’d completed the behemoth that was the Everything Goes series, I was somewhat adrift and not sure what to do next. Jon Scieszka’s Frank Einstein books were keeping me busy (and still are), but I wanted to get started on something new from my own head as well. Steve and I were talking about my favorite aspects of Everything Goes, and I kept going back to that city in the first book – and the recurring situations and characters in all three books. You know, like when there would be a broken-down car on one page; a few pages later we see the car getting towed; and then, later, we see the same car in the mechanic’s shop. Or when we would see the same guy trying to catch a cab in all three books. Kids noticed these things, and I really liked sneaking them in there.

Some weeks or months later, Steve suggested the idea of these little books about people’s occupations. Firefighters, police officers, and so on. It immediately felt like this classic series of books that didn’t actually exist. I spent a lot of time playing with the idea, but on its own, I couldn’t figure out what to do with it. However, once the connection to a city or community popped into my head, it all kind of fell into place. The citizens are a way into the town, and the town is a stage in which I can set many different stories. Right now, we have the small books, each about a day in the life of an individual person, and the picture books, which pull back and focus more on the community itself and how these various people interact and work together. This is pretty rich, and I can do a lot with it. But I have some other ideas that I hope to play with in the Tinyville Town world as well.

I know you have talked previously about why you consciously consider gender roles in this series, which is great – especially, as you mentioned at your site, because we live in a "sometimes backward world.” What kinds of responses, if any, have you received from children about that (that is, about having female pilots and female construction workers, etc.)?

I can’t recall any responses from children about this, but I wouldn’t really expect to. They don’t see anything abnormal in reading these books. This is the actual world they are growing up in. It’s their parents and other adults who make a big deal over these things, because we were the ones who grew up reading books and watching television that presented this weird world where it seemed only white guys were doing interesting stuff, all the while the actual world we lived in was exploding and changing and turning inside-out all around us. Does a five-year-old need to be told by my books that an African American woman can be a veterinarian? Or is this just a fact, and it’s really no big deal that my character reflects that? I think kids like it when she pulls the sock out of Flash’s belly and Flash gets a treat and feels better at the end. I think they couldn’t care less what gender or color she is, since they don’t look at the world the same way we do. I hope a boy of Asian descent would be as inspired to become a vet as an African American girl would.

What do you love about writing and illustrating for preschoolers/very young children?

Continuing my feelings from the last question, I’ll go with “less baggage.” They don’t tie all this stuff into books and stories, as we adults do. “Look honey, the mayor of Tinyville Town is black!” says Mom. “So what?” says Child. “So is the President of the United States!”

I know this might read slightly glib and disingenuous. And since I did create the books with an agenda sitting snugly in the back of my writing brain, I suppose that might be true. But it’s only true for the small part of me that keeps parents and teachers in mind when I write. The larger part of me that writes strictly for kids loves loves loves the fact that kids don’t approach books and stories with agendas, or pedagogy, or with any sense of lessons to be learned. But nor do they want to be merely entertained, either. Cute bunnies don’t cut it any more than my politics. They know when we’re full of it way quicker than the adults do, and they’ll turn against you if they think you’re trying to sneak morals into these stories. We’re not writing for their brains. We’re writing for their hearts. They may not be able to explain what they love about that book that they love, but they know it when they see it.

The publisher describes the new book as being about "good people working together to make something great," which it is. We keep hearing now about how divided our country is. Does working on a book like this feel like so much balm for one's soul? (Of course, this is going to post after the election results, which will be interesting to see, needless to say.)

You know, I hadn’t really thought of it that way. But yeah. If things go south on Election Day, this series will become even more important to me. If the world can’t be the way I want it to be in real life, heck, I’ll make my own. I don’t need to make Tinyville Town great again. It already is.

What's next on your plate?

I’m a Police Officer was completed a couple of weeks ago, and it will be the fourth board book. I’m working on the second picture book right now, which is about the first day of school. Beyond that, it’s foggy. I hope the series does well enough that Abrams wants to publish these stories for a long time.

Outside the city limits of Tinyville Town, I’ve got two more Frank Einstein books to illustrate, and that series has been just amazing. Jon Scieszka is bonkers. I also have a book coming in March, written by Mac Barnett and set in a tall apartment building, that is gonna blow everyone’s socks off. It’s so fun. And I’m finishing up a book by a new author that is equally outrageous, where the author and illustrator have a few disagreements about the direction the book is going and the issues are worked out in the pages of the book itself. These are very different turns for me, and I’m really excited about them.

Illustration © 2016 and used by permission of Brian Biggs.