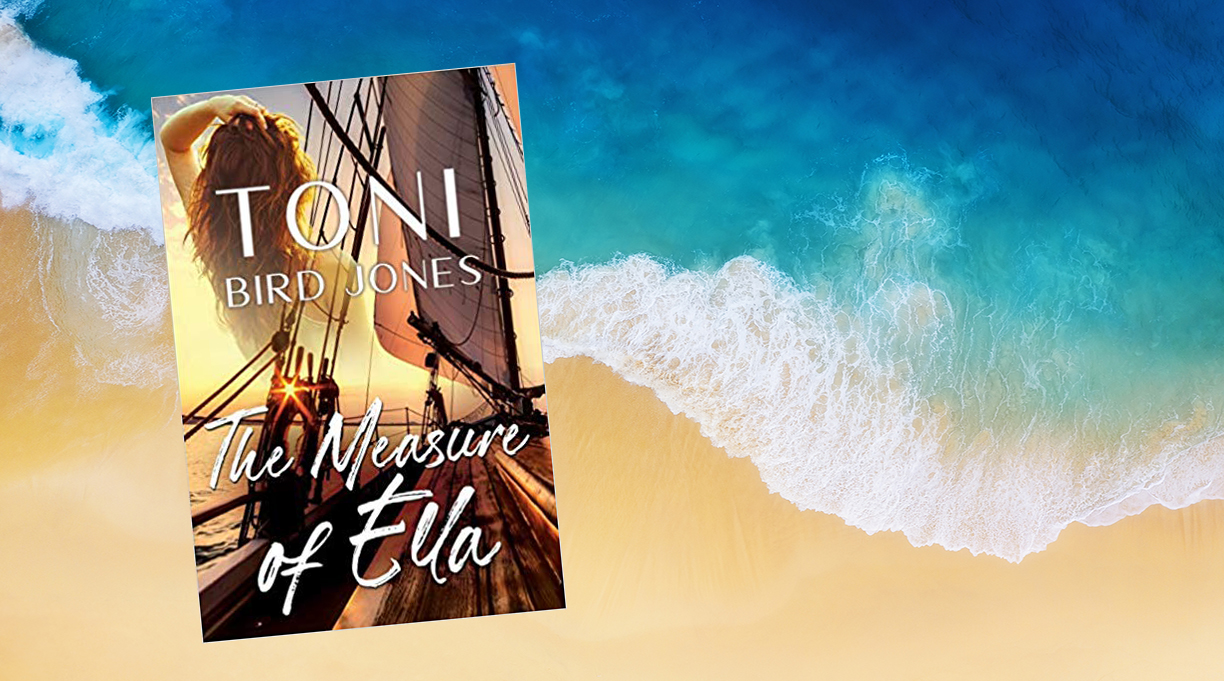 In the first chapter of Toni Bird Jones’ debut novel, The Measure of Ella, crew members aboard the 100-foot schooner Grace scramble to save one of their own as a violent storm pummels the boat. The young man is saved, and the storm passes with the crew’s having weathered it. It’s a fitting opening scene for the book, which Kirkus Reviews calls “a compelling, fast-paced thrill ride” set in a world that Jones knows intimately.

“I spent about 10-plus years down in the Caribbean and South Florida,” says Jones, who now lives in San Francisco. “My family was thousands of miles away. I was out of touch with them. I was kind of afloat in the world…and I took some risks. I came from a working-class family, and there wasn’t much financial support of any kind, so I had limited opportunities aside from the ones I made for myself. Like a lot of the colorful people I got to know on the docks of Florida, I got hooked on adventure.”

That experience allowed Jones to paint a detailed, entertaining picture of a world that’s closed off to the rest of society. It’s insular and protective, but once Jones cracked it, she found purpose and community on the docks and on the water.

Ella Morgan, the protagonist and cook aboard the Grace in The Measure of Ella, finds a similar acceptance. After losing her father and her lover, Davis, she gains comfort in the mechanics of sailing and in the support of the crew members with whom she set sail:

And for Ella, comfort came in the form of the inclusive sailing community and life on the water, where everything had a reason and a purpose….To Ella, there was nothing sweeter than this: all that remained was the simple dynamics of sailing the wind, the sound of the hull cutting through the water, and an occasional flap of the sail while the crew sat silently, surrounded by the black pool of the ocean, and watched the lights of land recede into darkness.

But circumstances eventually force Ella to make a decision: If she wants to get out of the galley and open the restaurant she’s always dreamed about, she needs funds. The old boat her father passed down to her was supposed to be that source of income, but she learns it’s in such disrepair that it won’t sell. So she decides to risk her life and jump on a drug-smuggling run to raise the cash she needs.

It’s a story Jones has watched play out in real life in the Florida sailing community and one she has lived herself. “I wanted to tell…the story of sailors, decent people for the most part, taking risks, tempted by the money from a drug run to repair a boat or fund their nomadic lifestyle,” Jones says. “I did end up going on a couple runs,” she admits. But she never made any money on them and decided, after a particularly dangerous outing, not to continue.

Like Jones, Ella is also too tempted by the allure of money to pass up a drug-run opportunity. And like Jones, Ella sets out on a dangerous excursion where she must come face to face with the potential of losing everything.

“Many who embark on such journeys are aware of these risks,” Jones says. “But they’re willing to take those risks in order to achieve something greater. The choices we make define who we are and shape our lives. Maybe the choices are made with caution and courage, or [they are] careless ones that are blinded by desire or fear or greed, or [people are] pursuing their dreams at all costs.”

Jones’ prose, which Kirkus calls “detailed but straightforward,” invites readers onboard and into a foreign world of sailing, smuggling, and the sea. Yet what grounds the novel are Ella’s ambition and how she navigates personal relationships to get what she wants.

Ella must also navigate the seas as a woman in a predominantly male community—“The sailing world is a man’s world,” Jones says. (She was the only woman in her class when she got her captain’s license in Puerto Rico.) And like Jones, Ella contemplates the power, or lack thereof, she has on boats crewed by men.

After Jones’ time in the Caribbean, she rode off into the sunset on a motorcycle through the Southwest, eventually marrying and landing on the West Coast, where she and her husband now sail the Pacific. She studied writing at the University of California, Berkeley, and the University of Arizona, Tucson, and although she always knew her sailing exploits would make for a great novel, it took her eight years to write The Measure of Ella.

“I’ve always been writing in my head,” Jones says. “I’m one of those people who look at people and say I know where they hurt….And I’m an eavesdropper, and I’m always curious.”

For The Measure of Ella, the person Jones eavesdropped on most was her former self, and the result is a rich story about self-determination, with the spectacle of high-stakes sailing as a satisfying, irresistible backdrop.

Matt Cortina is a journalist in Boulder, Colorado.