Trick or Treat, Give Me a Book to Read! 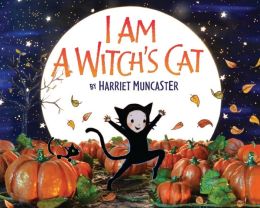 I knew I’d like to write about some good, new Halloween-inspired children’s books this month, and it just occurred to me that this week would be a good one to do that. Halloween is in two weeks, but you gotta have enough time to look for them on library or bookstore shelves, yes? So, let’s get right to it. I’ve seen a handful of these seasonal books, but here are some of my favorites from 2014.

I’ll start with Harriet Muncaster’s I Am a Witch’s Cat. This one is geared toward very young children, and just when you think the book is going one way, it offers up an entertaining twist at the end.

The story is told from the point of view of a very young girl, dressed up as a cat. She claims her mother is a witch. After all, she has potion bottles; she purchases things like green fingers at the store; she grows “magical herbs” in the garden, which she then uses to make potions; and so on. Readers see, however, that the potions are really just soaps and such from the bathroom; the green fingers are pickles; and the herb-filled concoctions are just yummy meals for them both to enjoy.

The girl clearly adores her, and by all indications, her mother is flying solo, no pun intended. No father in sight. Some nights she even goes out, so the babysitter shows up. The girl doesn’t know where her mother goes, but she knows she needs a break from being a witch. And just when child readers think they are on to the author, they see on the final spread that she really is flying on a broom in the sky.

Muncaster is a British artist, and this is her debut picture book. She confesses in her author bio to a “fascination with miniatures,” which is what this book brings readers. These are three-dimensional scenes, created using fabrics, watercolors, pen and ink, and other media, which were then photographed. The spreads utterly charm, and children who love the world of miniature art will pretty much squeal over this one. We’re talkin’ TEE-NINY PUMPKINS, as you can see on the cover.

Next up is Carol Brendler’s Not Very Scary, illustrated by Greg Pizzoli and also for young readers. This is a cumulative tale about a monster, named Melly, who has been invited to her cousin Malberta’s house for a surprise. Concerned parents, do not fret. Melly is composed of comforting, round lines and looks a lot like a sweet child, who just happens to have green skin, f

angs and horns. On her way to her cousin’s, she is followed by skeletons, wheezy witches, goblins, mummies, ghosts and more. Melly claims that each successive set of creatures is not scary, but in all actuality she is frightened. (Hey, even monsters get the heebie-jeebies sometimes.) In the end, her cousin throws a surprise party—just for Melly. And all the creatures who have followed her are there to party down. Score!

Each spread gets more and more crowded, given the plot, but the talented Pizzoli manages to keep things easy on the eyes—and the final two spreads, very festive and Charlie Brown–esque, wrap up everything with utter joy.

J. Patrick Lewis’ M is for Monster: A Fantastic Creatures Alphabet, illustrated by Gerald Kelley, has two particularly good things going for it: It’s a book that can be enjoyed any time of year, and it’s one that will prompt readers, especially older picture book readers, to read more on the subject.

This is just what the subtitle tells you: A collection of imaginary creatures, one for each letter of the alphabet and from the likes of mythology (Centaur), urban legend (the “Jersey Devil”), folklore (Baba Yaga), and more. Lewis has written a poem for each creature, but the poems are also accompanied by informational text: the creatures’ origins, their relevance in literature and culture today, etc. Kelley’s artwork is, at turns, stunning (the phoenix spread is jaw-droppingly gorgeous) and funny (the poor fisherman, staring right at the reader with a look that communicates that he’s fully and unfortunately aware of the Loch Ness Monster behind him).

And fans of Laura Vaccaro Seeger’s award-winning Dog and Bear stories will be happy to know there’s a brand-new set of Halloween tales out: Dog and Bear: Tricks and Treats. It’s a set of three more stories about one of children’s literature’s most beloved contemporary duos. Those two never get old.

Last but not least, for older readers Penguin Classics has released Washington Irving’s The Legend of Sleepy Hollow and Other Stories with an introduction and notes by Elizabeth L. Bradley. Halloween read-alouds with your older children and teens, anyone? And for your even older readers who want to delve into a book on their own, there is The Penguin Book of Witches, edited by Katherine Howe. A collection of historical accounts of accused witches—from the Bible to early American colonies to Salem and post-Salem—it’s a collection both fascinating and informative.

No trick. Treat yourselves to these books.