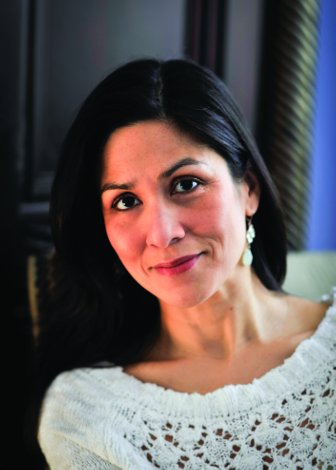 Who are your must-read authors? The ones who make you excited when you hear they have another title coming out? Whose books make you feel almost sad when you finish them, because you know you have to wait for the next one to release?

One of mine is Marisa de los Santos.

I discovered this author long before I became a reviewer, and read all of her books right away. Which at the time only consisted of three titles: Love Walked In, Belong To Me and Falling Together. (Adult titles, that is. She also writes middle grade titles with her husband, David Teague.)

I wrote about her fourth title, The Precious One, for NPR (here).

When I heard I’ll Be Your Blue Sky (review) was releasing, I was so excited, I didn’t even read the back cover on the ARC when it showed up. As they say, I’d read her grocery list, so who cared what the story was about? However, when I started listening to the audio that HarperCollins sent me (thank you so much HC—and the narrators did a terrific job!) I realized that not only had de los Santos written another book. She’d written another book that featured Clare and Cornelia!

Now, if you’re already a fan, you’ll know these characters. We first met 11 year-old Clare in the author's debut title, Love Walked In (starred review), when Cornelia takes her under her wing and helps her navigate an erratic mother and the death of her distant father. In the sequel, Belong To Me (review here—which was the first MdlS title I ever read), Clare’s life has stabilized and Cornelia has found true love, but a huge secret from her husband’s past and a terminally ill neighbor are game-changers. (This is the also the book where we meet Clare’s best friend and first love, Dev.)

In I’ll Be Your Blue Sky, Clare is about to get married, but her fiance (not Dev!) has anger issues. Clare is too wracked by guilt to call it off, even though she knows she should.

Right before the ceremony, however, she meets elderly, enigmatic Edith Herron, whose thoughtful conversation spurs Clare into canceling the wedding. Soon after, she learns that Edith has died and left her a house in Delaware. Taking shelter in the home after her ex develops stalker tendencies, Clare falls into the mystery of Edith. A little research, a few field trips, and some practical and emotional help from Dev unearths the trail of a secret network of Good Samaritans who helped abused women when society turned a blind eye, as well as hints to Edith’s own poignant love story.

There is so much to love with this author. Her characters are quirky, but in friendly, authentic ways, the kind that make you wish they were your neighbors and friends. And even when they do things that are slightly annoying, we forgive them because we understand that these are realistic directions these characters will take to play out this story. (I’m sure we can all agree that sometimes even our closest friends can be annoying!)

The writing is beautiful, at times breath-taking, and supports a deep emotional exploration of love, loss, loyalty, abuse and courage, while never turning dark or disturbing. Meanwhile, the lively, character-driven plot is setting up a connection among various characters that is both a huge surprise and an aha, of course! moment.

I am considered a romance advocate, and I very much embrace that role. But at heart, I’m mostly a fan of books that have satisfying, uplifting romantic elements and are written really well. Some of those are traditional romance novels, and I can list a string of authors you should consider if that meets your basic criteria too. There are tons of well-written romance novels, and if you’ve never read one, you should give them a chance. Really.

However, some of my favorite authors are writers who tell stories that have a love story in the middle of them, but build around them in smart, vibrant and multi-dimensional ways that go beyond the traditional romance novel, and explore other relationships more intensely.

Some of these are Jojo Moyes, Joshilyn Jackson, Susan Elizabeth Phillips (a hugely popular crossover author) and Kristan Higgins’ recent women’s fiction titles. Lauren Willig, Beatriz Williams, Kate Quinn and Karen White are some historical dual timeline faves. (I mention these because I’ll Be Your Blue Sky jumps between Clare’s contemporary journey, and Edith’s 1950s storyline.) If you’re a fan of any of these authors, you’ll want to give Marisa de los Santos a try.

After I’d listened to the book, and fell in love with these characters (again), I reached out to the author and was thrilled when she agreed to a phone interview. I hope you enjoy this overview of that conversation. I was so honored to “meet” her.

Marisa de los Santos started out as a poet, and earned an MFA and PhD in poetry. She’d never considered writing a novel. In fact, she says, “Before I wrote my first novel, I had a real fear of length. If you’d told me a few years before I started my novel that I’d be writing a 300-400 page manuscript, I would have said ‘no way!’”

But once she had kids, writing poetry became more difficult. “With toddlers, so much time and energy has to go to them. I was unable to find the laser focus I needed to get the poems done.”

She’d always loved fiction, her first doorway to her love of words. “Getting lost in a novel has always been my favorite reading,” she shares, even though the thought of writing one was intimidating.  Before starting Love Walked In, she wrote a few screenplays with her husband, and while they ultimately didn’t go anywhere despite some early interest, it was all part of the path to publication as a novelist.

“If I hadn’t done that, I don’t think I ever would have come to fiction. I learned so many essential aspects of longer-form storytelling—plot, timing, rhythm, moving the story forward through plot and characters. Looking back, I realize that when I understood those things, the idea of writing a novel became more accessible.”

She didn’t set out to write a novel, though. “Actually, Cornelia started coming to life as a voice in my head. She began, in a way, as almost pure syntax—asides, tangents, a kind of commentary on what was going around me. The first time it happened, it was really odd, but then I sort of fleshed her out a little. I could see pieces of her: she was in limbo, she loved movies. After a while I just sat down and started writing. Of course I realized that you don’t sit and write 400 pages. You do it in chunks. That made it manageable.” Though she’s still a little stunned every time she prints out the finished manuscript for edits.

When she first started writing, de los Santos says knew the characters and had roughly three things in mind about the stories before she’d start a book. The rest would flow through. However, after writing the middle grade titles with her husband, she discovered that she liked having a bit more of an outline in mind when she got started. “Details are always going to change, but I like a little more structure when I get started now.”

The things that have always interested de los Santos in novels are words and relationships. “Everything I love best has language that interests me and is character driven. I love plot, but without good writing and compelling characters, interesting plots will fall flat. I’m also very interested in relationships. In what happens when people come together. Sometimes this is romantic, and I always wind up with a romantic arc in my books. But also friends, sisters, neighbors. A friendship can be as powerful and as transformative as a romantic relationship. I like to explore relationships in all their dynamic, potent forms.”

If her goal is to captivate the reader by exploring thought-provoking relationships between irresistible characters using beautiful, vivid writing,  I can attest that Marisa de los Santos has succeeded.

I’m a Marisa de los Santos fan, and if you love great writing and fascinating explorations of character and characters through relationships, I expect you’ll love her too.