Two Books for the Weekend Ahead 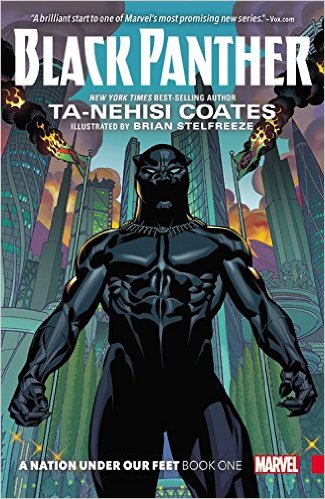 I read two short books recently back to back. They have absolutely nothing in common, but I thought they were a good pair nonetheless.

Black Panther - A Nation Under Our Feet Vol. 1 - is the first trade collecting issues 1-4 of the new Black Panther comic written by Ta-Nehisi Coates with art by Brian Stelfreeze. Recently nominated for a Hugo Award for Best Graphic Story, this volume is an incredibly complex work of politics and revolution, less of a superhero story and more of a no holds barred look at a country on the brink of revolution, under turmoil, and upheaval. The great African kingdom of Wakanda is a super rich, super advanced kingdom, and yet most of its people is terrorized and oppressed to one extent or another. It’s down to T’Challa - as well as many other characters who get a lot of the spotlight - to get to the bottom of it.

It takes the question of “Who is our King, and what good is he for” and elevates it to the next level: exponentially interrogating the roles of people, rulers, and other members of society. What are the limits of ruling, and who imposes those limits? What happens to a country that is constantly invaded and plundered for its riches (the fact that this is an African country should not be seen as a coincidence in the least)?

One of the recurring themes is that of T’Challa’s identity: is he a man, a God, a superhero, a dreamer, an Avenger, a King? But more than that, I was surprised that so much of the trade is less focused on T’Challa himself and much more in the kingdom and its people. As such, we see a lot of sides to this story and this is a rich, complicated, ongoing storyline that is far from over. I am super curious to see where Coates takes this to be honest, as I can’t see the Black Panther-as-King to be a sustainable model anymore after all that we have seen in the comic so far.

Black Panther Volume 1 is a dark, unsettling, fascinating, unfinished story and to combat the malaise I felt after reading it, I wanted to read something short, sweet, fun, and uncomplicated. Enter The Gauntlet by Karuna Riazi, a Middle Grade fantasy that was deliciously fun and adventurous.

During Farah’s 12th birthday party, she and her two best friends find themselves literally sucked into a board game - The Gauntlet of Blood and Sand - where they need to get through challenges set by the mysterious Architect and beat the game or else get trapped there forever along with countless other people previously defeated by the game. A bigger motivator for Farah though is that her little brother Ahmad is also trapped in the game but apart from her and all by himself. With the aid of other characters, including the amazing Henrietta Peel, the leader of a group of insurgent lizards, Farah and her friends need to beat the Architect at his own game.

If you read this summary and thought to yourself “Jumanji,” YES that is exactly what this book pays homage to, with a healthy side of The Wizard of Oz, too. The puzzles and challenges are legitimately scary and difficult and the kids find themselves using their best (and sometimes worst) abilities to save each other and go back home. There are moments of genuine affection, of grave danger, and when I say “uncomplicated,” it does not mean that the book is simplistic in any shape or form. With themes such as family and friendship (thinking of it, this is probably two themes this book has in common with Black Panther), The Gauntlet is a fabulous read and one I highly recommend.