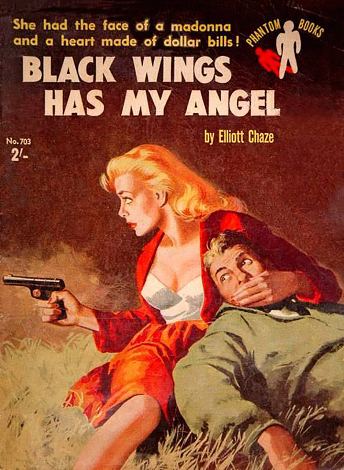 Launched in 1950, Gold Medal Books was an early and experimental line of inexpensive, pocket-size paperback-original novels, introduced during an era when paperbacks were usually reprints of previously published hardcover works. It was designed (with frequently lurid covers) for a principally male audience and included books by authors such as Richard S. Prather, W.R. Burnett, John D. MacDonald, John Flagg, Sax Rohmer (author of the Fu-Manchu thrillers), Bruno Fischer, and Tereska Torrès (whose 1950 Gold Medal release, Women's Barracks, is acclaimed as the first lesbian pulp novel). Oh, and let’s not forget Elliott Chaze (1915-1990), whose 1953 heist novel, Black Wings Has My Angel, was later dubbed—by no less an authority than author/editor Ed Gorman—as “the single best novel Gold Medal published during its heyday.”

Born in the compact Cajun country town of Mamou, Louisiana, and a graduate of the University of Oklahoma, Chaze (called Lewis Elliott Chaze at birth, his surname pronounced “shayze”) was inclined early on toward a career in journalism. He began as a reporter with the New Orleans bureau of the Associated Press, and then, after serving as a technical sergeant with a U.S. Army airborne formation during World War II, transferred to the AP office in Denver, Colorado. Chaze finally moved on to Hattiesburg, a city in southern Mississippi where he made his nut as a reporter, and later city editor and columnist for the Hattiesburg American.

Like so many newshounds, then as now, Chaze eventually tried to turn his writing talents toward the composing of novels. His first book, The Stainless Steel Kimono (1947), exploited the author’s military experience, rolling out what an early edition called “the bawdy adventures of seven tough paratroopers in Japan.” His follow-up, The Golden Tag (1950), again contained biographical elements, this time exploring the life of a young wire-service reporter and would-be novelist in the Crescent City. But it was Chaze’s third attempt at producing extended fiction, Black Wings Has My Ang

el—newly reprinted by New York Review Books Classics—that has earned him belated but enduring recognition as a literary stylist.

From the outset, we’re propelled into a noir-ish world—bleak, desperate, and haunting. There we encounter our antihero protagonist, a mid-20s prison escapee and car thief who calls himself Tim Sunblade (not his real name, of course). After four months of “roughnecking” on an oil rig that punctuates Louisiana’s Atchafalaya River, he’s more than ready for a “hot-water bath” and some fragrant female companionship. So he takes a room at a forgettable little hotel in a forgettable little town, and before he soaps up, he asks an obliging bellhop to find him a hooker for the evening. He’s more than a bit surprised when the porter returns with Virginia, an intriguingly well-spoken “ten-dollar tramp” boasting lavender-gray eyes, hair of a “light creamy gold,” and legs that go all the way down to the ground and then some. Sunblade had figured to exhaust one night of booze and sex with this woman, but that isn’t quite what happens.

I hauled out of the tub and picked her up and carried her back into the bedroom and it was three days before we left the room. Together. She said it was like the song we kept getting on the little bedside radio: “If You’ve Got the Money, Honey, I’ve Got the Time.” The trashy tune and words sounded funny coming out of her in the Wellesley manner, in that imperceptibly clipped, ladylike voice.

As it turns out, Virginia is on the lam, too, following a spot of trouble back in New York City, and she’s ready to open a fresh chapter of her life. Which works out pretty well, because our man Sunblade has no intention of going back to that deafening oil rig, either; he intends instead to pull off a high-stakes robbery, one that he had planned with his prison buddy Jeepie, and that he hopes will set him up in high clover for the balance of his days. He hadn’t intended to involve Virginia in that enterprise, which is why, after they drive off in his full-throated Packard convertible, heading west, he tries to ditch her in a New Mexico filling station/café. Virginia, though, isn’t so easily gotten rid of. So these two ill-omened lovers strike up a love-hate relationship that Sunblade imagines will serve his scheme nicely.

[Jeepie had] always said the plan called for two people, one on the waiting end, one on the dying end. Well, I had two people. Me and Virginia.…Virginia would be on the waiting end. I didn’t mind the dying end. Because back there I never thought about how a man could die by the clock and calendar, ticking off the days and the minutes as if he were waiting to have a baby. When I thought of dying there was a lot of noise in it and then blackness, no different than any other blackness but more complete and lasting.

After some time spent camping in the edenic backwoods of Colorado, where they convalesce from a knock-down brawl they’ve had over the seed money Sunblade has collected for his heist, this pair find residence in suburban Denver. There they rent a house and pretend to be newlyweds, while Sunblade signs on as a power-shear operator at a factory that churns out “bodies for sugar-beet trucks.” The two are lying low while Sunblade refines the nuances of his plan to rob an armored truck that ferries cash and other pecuniary goodies between banks. In the process, they purchase and make necessary modifications to a trailer and scope out an abandoned gold mine they will need during their escape with the filched dough.

The reader learns early on not to expect anything approaching a happy ending from Chaze’s twisted yarn. This whole book is something of a confessional for first-person narrator Sunblade, an opportunity for him to sort back through the hopes and heartaches and hubris attendant on his best-laid plans. We watch our antihero and his femme fatale partner do battle and make up, abandon each other and come together again, driven forward by a hunger that’s part animal lust, part mutual greed. Their love is callous, their need for each other conditional. Their happiness fleeting.

Yes, the robbery goes off pretty much without a hitch. Only one person dies in the process. And though disappointment seems imminent as Sunblade opens the bags stuffed into the hijacked armored car, he and his leggy blonde confederate ultimately score something just shy of 200 grand for their trouble. That sum is enough to send Virginia into an almost sexual paroxysm of delight, one that artist Charles Copeland captured well in a 1962 edition of Black Wings, retitled One for the Money—shown o

n the left—and that’s reminiscent of another scene, from Gil Brewer’s 1958 tale of cupidity and seduction, The Vengeful Virgin.

Once they’ve disposed of the truck and corpse, our two nihilistic lovebirds hie off for New Orleans to thoroughly enjoy their ill-gotten prosperity…only to discover how money brings out the worst in both of them. It might be said that the only fate more dire than having their heist fail was having it succeed. By the time Chaze’s novel spirals to its shockingly karmic close, it’s hard to imagine things turning out any differently.

Black Wings Has My Angel isn’t a page-turner in the sense of being filled with action; it’s rather relaxed in its telling, building up tension for later drama. What keeps you mesmerized are the author’s dexterity with language and his keen observations. When he compares the landscapes of the American West and South, for instance, Louisiana native Chaze remarks that “out West all the smells are sucked up out of the baked land by the sun.…The sky is high and pale and impersonal and you get the feeling it doesn’t belong to you at all, but that it is the property of the chamber of commerce. In the South the sky is humid and low and rich and it’s yours to smell and feel.” Some of Chaze’s most memorable imagery concerns Virginia’s feminine attractions (“She was lying on the sleeping bag in the sun, as slim and bare as a sword”), but he can also be unflattering of her post-heist turn toward indolence and excess, leading Sunblade to say, “I was sick of Virginia, too, and of what the money had done to the both of us, changing a tough, elegant adventuress with plenty of guts and imagination into a candy-tonguing country club Cleopatra who nested in bed the whole day long and thought her feet were too damned good to walk on.” One of my favorite lines, however, belongs to Virginia, who tells her partner in crime, “You move around like a damned tormented tomcat and your eyes aren’t right. You’re just about perfect. And you’re just about horrible.”

Chaze went on from Black Wings to pen half a dozen more novels, including his controversial treatment of America’s 1960s civil-rights struggle, Tiger in the Honeysuckle (1965), and another bank-robbery story, the mordant Wettermark (1969). But “nothing else Chaze wrote came anywhere close to what he had accomplished on all levels in Black Wings,” fellow novelist Barry Gifford opines in his introduction to the New York Review Books’ new edition of that 1953 narrative. He adds that Elliott Chaze passed away—“cranky, bitter about having been mostly ignored as a serious writer”—during a decades-long stretch when Black Wings Has My Angel was out of print in the United States. It’s unfortunate that Chaze is not around to see his masterful crime novel make its comeback. It’s lucky for the rest of us that we are.