The Voice in the Woods 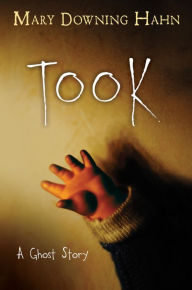 Tell me if you’ve heard this one: a group of people—usually college students or people from the city or people with money—head to a rural area for rest and relaxation. The County Folk warn them about a local danger. The People From Away chalk the warnings up to unsophisticated superstition, and dismiss them (usually rudely). The Country Folk are later proven right.

That’s pretty much the storyline that Mary Downing Hahn is working with in Took. In it, a big change in income leads Daniel and Erica’s parents to move them from a privileged-laden life in Connecticut to what they try—at first—to sell as a “simple” life in rural West Virginia. The move is hard on all of them: Dad resents having to wear an orange apron at Home Depot instead of being a high-powered bigwig at a corporation, Mom starts smoking again, the kids at school mock Daniel and Erica for their accents and hoity-toity-ness, and no one in town is particularly friendly. The family, rather than drawing together and supporting one another, are driven further and further apart by the difficult transition, and all four of them spiral into their own personal pit of depression and stress and anger.

The only person who has any sort of support is 7-year-old Erica, who puts all of her love and trust into her doll, the not-so-creatively-named Little Erica. Unfortunately for her, the voice emanating from her doll isn’t the voice of a friend….

Readers familiar with Wait Till Helen Comes* will find much of Took pretty familiar territory—in addition to the Supernatural Being Threatening Younger Sibling storyline, the personalities and conflicts are strikingly similar, and we’ve also got parents who are not just utterly unsympathetic and unhelpful, but actively awful, in that they outright blame Daniel for his sister’s disappearance. It doesn’t have as much depth as Wait Till Helen Comes—that one relies much more on the relationships to build tension, whereas this one relies much more on plot—and it feels dated enough in parts that I wonder if it’s a re-working of an older manuscript, but it’s still an entertainingly creepy read.

Points for dealing with the tension that a change in economic status brings, for realistically portraying a marriage in the process of fracturing, and for showing the culture clash between longtime rural residents and new transplants from more built-up areas. (That last one is admittedly pretty two-dimensional, but a good amount of it still rang pretty true to this longtime rural resident.) Double points for the names of the adults at the school: Mrs. Danvers, Mr. Sykes, and Miss Mincham. (I read an advanced copy, but I’m hoping that Miss Mincham will be changed to Miss Minchin in the finished product? Then again, maybe I’m just Seeing Things That Aren’t There. But I do love the idea of a school being run by antagonists from literary classics.)

Have you read any good creepy middle-grade books lately? This one whetted my appetite for more. I’ve heard good things about Kenneth Oppel’s The Nest…maybe I’ll pick that one up next.

*WHICH IS GOING TO BE A MOVIE! SO! EXCITED!