We Can't All Be Buffy, But We Can Still Slay Our Demons 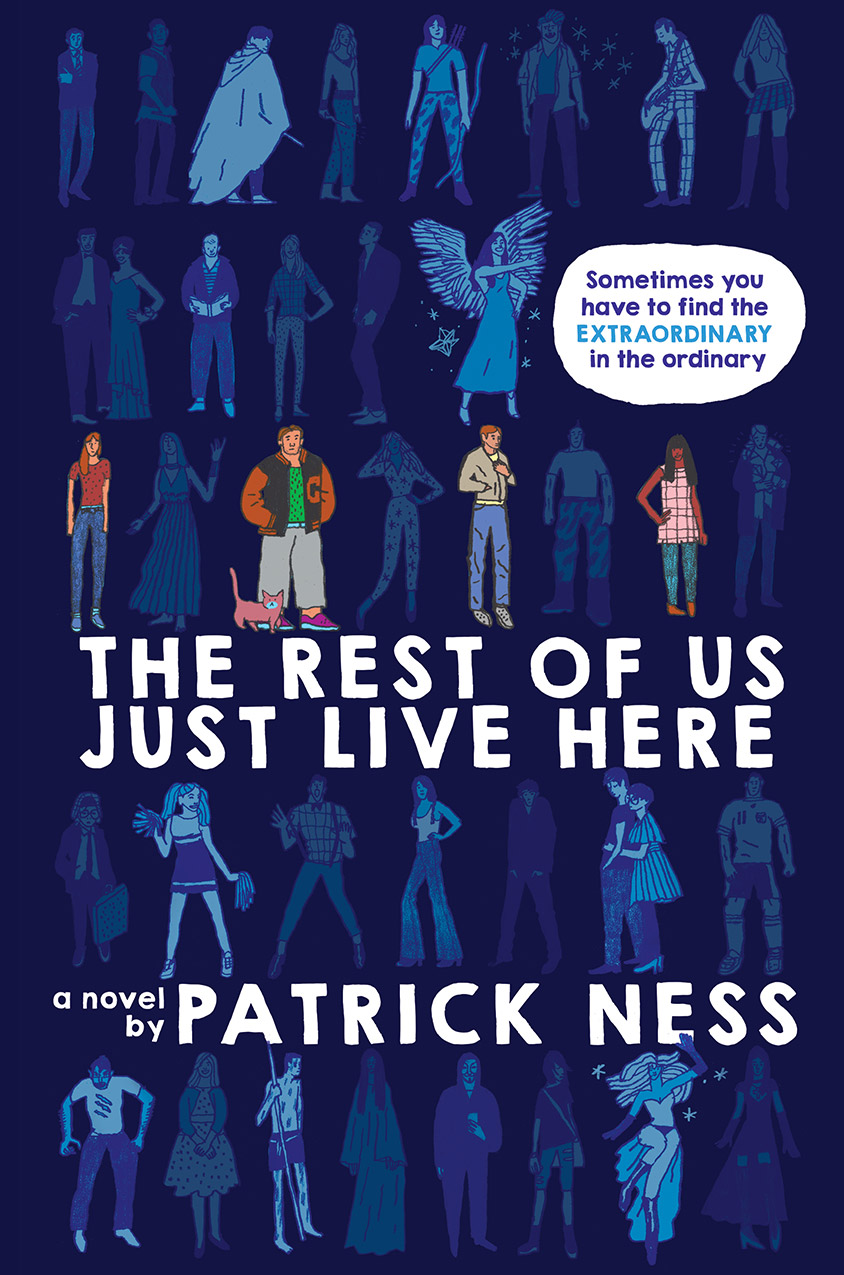 This cover is a mothercussing masterpiece. Josh Cochran's illustrations are playful while accurate (and remind me of Noelle Stevenson's Fangirl art, which is always a good thing), and get this: it glows in the dark. That is some HIGH-TECH SCIENCE, Y'ALL.

Let me begin by borrowing a few lines from Patrick Ness' letter to readers:

Do we get to be the heroes and heroines of our own lives? Maybe with small Hs? Aren't the things we do kind of extraordinary too? Isn't loving your friends and making your own decisions kind of amazing? I think so.

So I wanted to write a book for that version of me. The one who has to live in the world of a YA story but who can never be Buffy (as much as I LOVE Buffy (and I do), I'd probably never even have been a Scooby; too busy studying so I could get out of town to college.)

I mean, this book already sounds fantastic, right? I really don't need to tell you anything more (because Patrick Ness), but let's go through the motions.

Mike Mitchell is a regular dude facing a normal litany of problems. He likes a girl (Henna) who doesn't like him back; his parents (alcoholic dad, politician mother) are pretty crappy; he's about to be separated from everyone he holds dear thanks to college; his OCD has returned with a vengeance. The one thing he doesn't have to worry about is the invasion of immortal gods, because he's not one of those people. See, Mike doesn't hang with the so-called "indie kids," which means he never has to face soul-eating ghosts or battle vampires. So while some of his classmates are fighting to save the human race, Mike is just trying to survive high school—which, it turns out, can be just as challenging.

Mikey is awkward and angsty and sensitive and GAH I want to take him by the shoulders and tell him that IT'S ALL GOOD. He feels like such an authentic teenage boy, but even when he's being a dick, you can't help but take his side, because you know that deep down, he just wants to love and be loved. In addition to suffering from OCD, Mike constantly wrestles with the fear that his sister Mel's eating disorder will return, and his interactions with her are heart-melting, because he is seriously the BEST brother.

Speaking of Mel, I've got a few bonus charms to award. Both of Mikey's sisters are freaking rock stars: Mel is a straight-shooting, majorly fierce female, and little Meredith is hilarious and supersmart. Then there's Jared, Mike's bestie, who is a combination of Tiny Cooper and the Beastmaster. Yep, you read that right. He's large, he's gay, and he's the grandson of the Goddess of Cats, which means he can talk to felines as well as heal them. Honestly, he might be the greatest character ever dreamed up by Patrick Ness (or anyone else, for that matter).

Mike's relationship with Henna is wonderfully complex, given their long history of friendship. They're comfortable with each other, and they love each other, but Mike can't figure out if they love each other. His pining for her occasionally leads him into Duckie territory, which can be annoying, but at the same time, Henna doesn't exactly send clear signals. The realistic nature of their relationship may not be especially romantic, but it will certainly resonate with anyone who's ever been stuck in the Friend Zone.

Earnest and direct, Mikey's voice is instantly engaging, and his cynical sense of humor never undermines the weight of his emotions. Ness masterfully explores the roller coaster of adolescence through Mike's narration, which rings true and clear throughout the book, whether he's obsessing over Henna or freaking out about his future:

By setting Mike's experience against a backdrop of teens-turned-superheroes, Ness illuminates the epic struggles of everyday life which, as he skillfully proves, make for novels that are just as compelling as anything found in the supernatural realm.

Thanks to his genius premise, Ness has a field day with all of the YA tropes we've come to know and love despise. Each chapter begins with a paragraph summary of events occurring in the "indie kid" world, like so:

Chapter the tenth, in which indie kids Joffrey and Earth disappear from their homes, their bodies found miles away; Satchel goes into hiding at an abandoned drive-in with fellow indie kids Finn, Dylan, Finn, Finn, Lincoln, Archie, Wisconsin, Finn, Aquamarine, and Finn; seeing a blue light in the night, Satchel meets the boy from the amulet, the handsomest one she's ever seen; he tells her this isn't a safe place for her or the others and that they should run; then he tells her she's beautiful in her own special way and that's when she knows she can trust him; the indie kids go back to their homes.

Y'all, it's HYSTERICAL, especially when our heroes reference the various indie kid happenings with absolutely zero sarcasm:

"This is worse than when they were all dying beautifully of cancer," Henna said, and she's right.

Only Patrick Ness could strike an emotional chord while simultaneously poking fun at his own genre.

As I mentioned previously, Mike has a debilitating case of OCD, while Mel is recovering from an eating disorder. Then there's the fact that Jared is gay but not so much out. Oh yeah, and Mike's dad is an alcoholic and his mom is basically unavailable. It sounds like a lot, I know, but these issues never feel fabricated or tacked on. Instead, they're simply part of these characters. This isn't an OCD book or an eating disorder book or a coming out book— it's a book about people trying to deal with their shizz in a very moving, very human way.

There's one chapter that consists solely of a conversation between Mikey and his doctor, and...well, let's just say it should come with a DNRIP (Do Not Read in Public) warning.

As for Jared, I can't think of an actor who's big enough and awesome enough to play a gay lineman who's a quarter god.

I've come to expect great things from Patrick Ness, and The Rest of Us Just Live Here is no exception. It's funny, it's sharp, and it delivers a walloping punch of the feels. Creative and consuming, this is a novel that you read with your gut, because that's exactly where it hits you, even as you're laughing at the YA stereotypes and shaking your head at Mike's more "typical teen boy" moments. Ness has taken an important message and carefully wrapped it in a dynamic story that speaks to everyone, whether you're a Chosen One or not.

The Rest of Us Just Live Here is available now.