We Come In Pieces 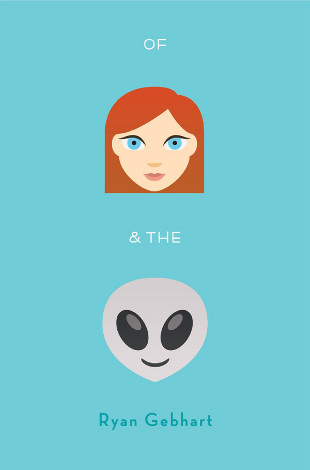 BOOK REPORT for Of Jenny and the Aliens by Ryan Gebhart

Did you know that the red-haired girl emoji was named Jenny? Me neither.

Derek is a teenage boy dealing with two things outside of the normal teenage boy issues. No. 1: he’s madly in love with a girl named Jennifer Novak, but has no idea where he stands with her. And No. 2: aliens from the Alpha Centauri solar system have made contact with humanity, and the world’s tensing for a possible invasion.

The deal with Jenny is a much more pressing issue for Derek, however, and he’ll do pretty much anything to make her his one-and-only, even if it means starting an interstellar war.

I knew pretty much from the start of this book that I wasn’t going to like Derek. For one, the book opens with Derek hanging out at a party, drinking and judging those around him, and wearing nothing but a pair of boxers. When Jenny shows up to the party—topless—Derek begins to have issues of the teenage male sort. I could cut him some slack, until this passage:

“Like every ten seconds, I check and make sure my weiner—whom I call the King in the North—doesn’t poke out to say ‘heyoo’ to the world.”

Props for the proper usage of “whom,” but so much side-eye for everything else.

Derek and Jenny—spoiler alert—hook up the night of the party, and Derek loses his virginity to her, in part because of the looming threat of alien invasion; what teenage boy wants to die without having done the deed? The hookup turns into hanging out frequently, and Derek is immediately smitten. But Jenny’s not one to be tied down, and this is not what Derek wants to hear. It’s sweet that Derek is so into her, but her personality leaves a lot to be desired, and as Derek’s does too, pretty much all of the swoon (if there was any) was lost on me.

While reading Of Jenny and the Aliens, I found myself wondering if Derek was indicative of a typical teenage boy. He certainly seemed it, at least in a stereotypical sense; he was crass, obsessed with the idea of sex, not really bothered by never having clean clothes, OK with using body spray and/or cologne instead of showering, etc. Honestly, I finished the book super thankful that I grew up a girl, and one who didn’t really catch the eye of this sort of guy. Ryan Gebhart certainly captures a certain type of teenager, but the fact that Derek’s so gross detracted from my enjoyment of the story.

I wholeheartedly believe that we are not alone in this infinite universe, and I look forward to the day that belief is proven true. I just hope that when it does happen, it’s more Star Trek and less Independence Day.

Relationship Status: Look Me Up in a Decade or Two

You have a lot of maturing to do, Book, and I’m really not interested in waiting around until you figure yourself out. I’m sorry if that sounds harsh, but I’m just too darn old to deal with teenage bs at this point in my life. Best of luck to you.

What Goes Up will be available August 1.